Greenlight > Games > captainsoft's Workshop
Greenlight is being retired. For more information on how to submit games to steam, refer to this blog post.
This item has been removed from the community because it violates Steam Community & Content Guidelines. It is only visible to you. If you believe your item has been removed by mistake, please contact Steam Support.
This item is incompatible with Greenlight. Please see the instructions page for reasons why this item might not work within Greenlight.
Current visibility: Hidden
This item will only be visible to you, admins, and anyone marked as a creator.
Current visibility: Friends-only
This item will only be visible in searches to you, your friends, and admins.
The Terminal Angel Disease
Description Discussions1 Announcements1 Comments29 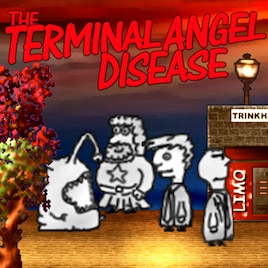 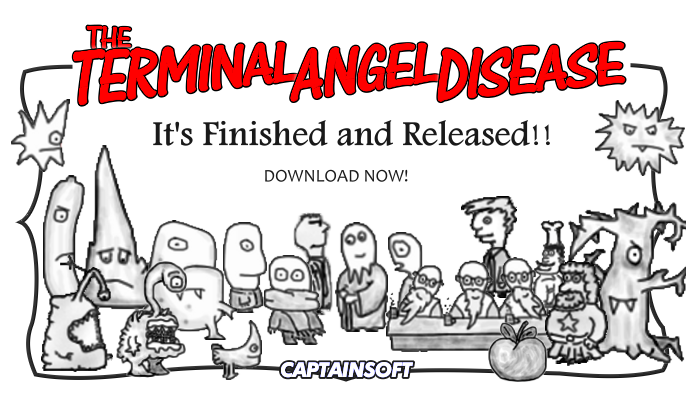 Yes, it's true, Captainsoft's controversial underground 2D-RPG "The Terminal Angel Disease" is completed, and now FREE for fans to download.

Visit our homepage to download your copy today! [www.captainsoft.de]

The "Terminal Angel Disease" is an underground role playing game with a character heads party. Wander around on tile-based maps and fight against baddies in a mix of real time and strategy combat system. Solve an original and funny story with lots of old-school moments and - of course - hundreds of items to loot.

Four friends - our party - are living in the city "Bunga Terra Tissa Tu", formerly the scenery of a successfull computer game series, the "Deep Deep Dungeon".
But with the invention of 3D graphics, the series got sacked. The heroes, NPCs, and monsters became unemployed and, ehm, fat.

Suddenly... one morning after a nice jazz night out, new packs of monsters are roaming the city! They ride desperado skateboard, kick out street lamps, and throw empty lemonade cans on the streets!

It appears that the guardian angels of the city, the SCRIPTS have been abducted! And even more obscure: Friday Guy, the man responsible for the start of the weekend, did not turn up at work this morning, but his office is wasted with mountains of chewing gum paper!!
There is only one solution: We have to go down the Deep Deep Dungeon again! It has been closed for decades, and only open if schoolchildren go there for a fields trip to learn about history!

This is the beginning of an epic adventure where our lovely 2D-characters have to fight against rowdy baddies, cappucino hangover, stereotyped quest-proving NPCs, the awkward game controls, but also against the threat of another dimension... the third dimension!!!

We wouldnt' let you go down the Deep Deep Dungeon without the proper, qualified equipment RPG equiqment, would we? That's why the game includes:

Then become a fan, follower, and a friend! Support us on the usual websites (and if we get the 1000 likes on facebook, I'll quit my office job! :)

No really, this game was developed all my myself (including the crappy graphics) 20 years ago as a teenager.... but over the last years I improved it bit by bit, and - just for the fun of it - wan't to share it now with the world. Don't expect an AAA indie title... it's an underground indie game.... enjoy it like it is! :)