Greenlight > Games > Studios iLLOGIKA's Workshop
Greenlight is being retired. For more information on how to submit games to steam, refer to this blog post.
This item has been removed from the community because it violates Steam Community & Content Guidelines. It is only visible to you. If you believe your item has been removed by mistake, please contact Steam Support.
This item is incompatible with Greenlight. Please see the instructions page for reasons why this item might not work within Greenlight.
Current visibility: Hidden
This item will only be visible to you, admins, and anyone marked as a creator.
Current visibility: Friends-only
This item will only be visible in searches to you, your friends, and admins.
Subaeria
Description Discussions0 Announcements3 Comments84 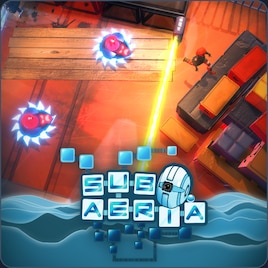 Studios iLLOGIKA
Offline
See all 3 collections (some may be hidden)

View Subaeria in the store

Hi everyone, little update on the game, we've decided to launch it on Early Access in order to gather feedback and input from players so that we can launch the best game possible. The game will be available starting September 22nd 2015!

Read More
Subaeria has been Greenlit!
May 27, 2015 - Studios iLLOGIKA

Thanks to all your votes and help, Subaeria will be available on Steam at launch! We'll keep you updated right here as we continue to work on the game and approach the realease, thanks to all of you again, the team is ecstatic!

Subaeria is a roguelike action puzzler where players manipulate robots into destroying each other.

Players follow the journey of an outcast trying to escape a world ruled by technology. Armed only with their wits and drone companion, they’ll have to fight their way through droves of murderous robots by pitting them against one another. As they progress through the underwater city of Subaeria, they’ll uncover the mysteries that lie below the depths.

In Subaeria players have no weapons or combat abilities and must learn to use their environment and enemies against one another to progress. The characters are only human after all, regular people struggling against a system that seeks to destroy them.

Players can manipulate both their character and a hovering companion, their Drone, to trick and influence enemies into defeating each other and themselves. Along the way, they’ll find many skills to upgrade their Drone and give them an edge needed to survive.

They’ll have to make strategic decisions in how they progress through the city and how they allocate their resources in order to survive long enough to witness the resolution of their characters’ story.

The game has full controller support

For more information you can visit our official website: http://www.subaeria.com

Want to see Subaeria on Steam? Click the Yes button!

General Moai Aug 10, 2015 @ 7:19pm
Hi! I went on a trip on ''Studios illogika'' and I had the chance to meet and greet the staff. I also got to play the game, see the storyline, and test it out. The game is highly recommended for indie game fans. Of course for people who like puzzles. Also co-op mode might be added! So get pump.

Subaeria has been Greenlit and is now listed in the Steam store. For the latest information, purchase options, and discussions for Subaeria, please see it on the Steam Store or in the Steam Community.
Visit Store Page
For more details Visit Community Hub
For latest discussions
If you really, really want to, you can continue to the Greenlight page. Information on this page may be out of date, since all the action has moved to the areas noted above.