Greenlight > Games > SyncBuildRun's Workshop
Greenlight is being retired. For more information on how to submit games to steam, refer to this blog post.
This item has been removed from the community because it violates Steam Community & Content Guidelines. It is only visible to you. If you believe your item has been removed by mistake, please contact Steam Support.
This item is incompatible with Greenlight. Please see the instructions page for reasons why this item might not work within Greenlight.
Current visibility: Hidden
This item will only be visible to you, admins, and anyone marked as a creator.
Current visibility: Friends-only
This item will only be visible in searches to you, your friends, and admins.
V.Next
Description Discussions1 Announcements5 Comments150 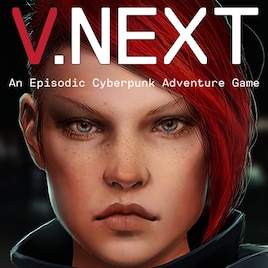 SyncBuildRun
Offline
See all 21 collections (some may be hidden)
Recent Announcements View All (5)
A Quick Survey about V.Next Episodes!
November 24, 2015 - SyncBuildRun

We've hit our internal Alpha Milestone, meaning that we just have a few more features to add, some content to complete, and a lot of bugs and polish to fix. However, we're looking forward to releasing Episode 1 (and that means Season 1) of V.Next within the first three months of 2016! This is great news for all our V.Next supporters!

We are aware, however, that other episodic games have... fallen short of expectations. Given our current lean-and-mean development team, we don't think we'll be able to hit our goals of 18 weekly episodes for V.Next. However, we want to understand what's most important to our players, since "Focus on the Player" is one of our company Core Values.

Thus, we're asking you to fill out a brief survey. It shouldn't take more than a minute, honestly, unless you want to write us a note at the end. In that case, take as long as you want!

In the meantime, don't forget that you can purchase a V.Next T-Shirt on Amazon.com to show your support for Vivienne and Cyberpunk Hackers everywhere! http://amzn.to/1R60vnk

Thanks again for following our progress on V.Next!

It’s been a while since we made a post about V.Next, and going quiet for too long can be discouraging and disconcerting to our players, which we of course want to avoid. We still love you!

Thus, we’re sharing a status update so you know where we stand. The TL;DR is this: We’re still making our game, it’s going to be more slim, but less expensive, than our original plan, but we still have a path to deliver on our original goal of 18 episodes of V.Next.

Now for the details. Obviously missing our Kickstarter goal was sad, but hitting our Steam Greenlight goal was great. We can ship on Steam, which is where all the players are, which is great for both them and us. In terms of funding, we’ve had to scale back a bit on our vision, but that’s fine, we expected this as a possible outcome. The obvious question is, what does V.Next look like for you, the player, when it ships?

Our artist, Sebastien, has been cranking away on character animations and settings, and I (Paul) have been coding like mad to get the game moving forward. Right now we have Vivienne walking around what we’re calling “the Hub”, which is a representative part of Seattle, from the Port, through Pioneer Square, up across the highway, to Capital Hill, including some underground sections of a Light Rail station and the Bertha Tunnel. We can enter and exit various locations, like Jackson’s hardware shop, the Metro Noir, and a bar and nightclub where various meetings with some of the more interesting characters in the game take place. We can also stand in front of a workbench, and move to Circuit Mode (where we modify hardware), or a computer and move to Code Mode (where we go online and enter cyberspace). We have achievements, save-games are saving (but not yet loading), we can start a new episode, set our settings, view the credits… a whole bunch of stuff that’s necessary for a game.

We have cut out motorcycle mode, which, based on feedback was one of the least visually appealing parts of our trailer, and in terms of gameplay, was the most superfluous. We’ve also scaled back how our missions work, but we still think they’re going to be great.

Our goal right now is to hit an Alpha (feature complete, testable) version of the game, with a single extended episode, by the end of October. That’s right around the corner, so we have a lot of work to do. Still, this will let us tweak and tune the game until we have something that’s super fun. What we’re planning on releasing will be a single episode of V.Next at a reduced price. The game will be fully playable, with an exciting single episode story, and we’re still planning on random mission generation for when that episode is over.

Here’s where you, the player, come in. If we can hit our goals for numbers of players, we can produce a bunch more episodes for free, and then complete Season 1 as a reduced cost DLC. This means that you’ll probably get about 30% of our original planned Season 1 at a very low price, and can complete all of Season 1 at a 25% discount from our original plan. What a great value! Anonymous would be delighted!

We’re going to get back on schedule for making weekly updates on our status, with some more screenshots and movies to be sure. We know this upcoming week, everyone is focused on PAX, and we really wanted to demo there or at SIX (the Seattle Indie eXpo), but that wasn’t in the cards. Still, if you see us around (we’ll be at PAX on Monday, and around town the rest of the week), say hi, and we may be able to give an in-progress demo for a few people if we have our laptop with us.

Thanks for being fans and supporters, and we’re looking forward to showing you what’s next!

You play as Vivienne Denue, a recently imprisoned computer hacker set free on the streets of a darkly futuristic Seattle. Take revenge on corrupt corporations and fight for the underclass by manipulating circuitry, coding up new infiltration software, hacking servers, and sneaking past surveillance systems. You'll collude with Artificial Intelligence and rip through the city on your tricked out Cafe Racer, all before recharging the batteries on your Cyberspace Deck.

With a gritty retro visual style, V.Next will take you on an epic journey across nearly 20 episodes of adventure. Harkening back to the written works of William Gibson, Neal Stephenson, and Bruce Sterling, with visual references to Blade Runner, Max Headroom, The Girl With The Dragon Tattoo, and The Matrix, and a soundtrack by well known electronic bands (including an original score by musician Tom Shear of electronic band Assemblage 23), V.Next is a thrilling tale of electronic warfare, discovery, justice, and adventure that brings the best of 1990's cyberpunk to modern screens.

Key Features
Who Are We?
SyncBuildRun is a Seattle-based gaming startup, consisting of gaming and entertainment professionals, with dozens of shipped titles to our credit. We have two goals: First, build the best episodic games on the market, with frequent releases of narrative-driven content that will engage and excite our players. Second, embrace a progressive and inclusive attitude, tell stores and feature leading characters who are often overlooked by broader media.

To that end, we're proud to present V.Next as a game series about the power of women and their positive mastery of technology. We are looking to sidestep cliche stereotypes to help usher in human stories that respect women and salute the values they bring to leadership. We hope you enjoy what we're making and thank you in advance for your support to create this important, timely and groundbreaking game. We're excited to share this adventure with you, and hope you come along for the ride!

Learn more about our goals and team at http://www.syncbuildrun.com/