Greenlight > Games > Prologue Games's Workshop
Greenlight is being retired. For more information on how to submit games to steam, refer to this blog post.
This item has been removed from the community because it violates Steam Community & Content Guidelines. It is only visible to you. If you believe your item has been removed by mistake, please contact Steam Support.
This item is incompatible with Greenlight. Please see the instructions page for reasons why this item might not work within Greenlight.
Current visibility: Hidden
This item will only be visible to you, admins, and anyone marked as a creator.
Current visibility: Friends-only
This item will only be visible in searches to you, your friends, and admins.
Knee Deep
Description Discussions3 Announcements5 Comments80 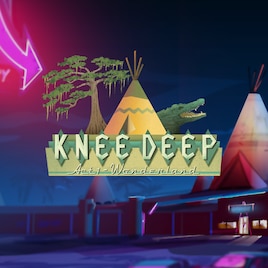 Prologue Games
Offline
See all 8 collections (some may be hidden)

View Knee Deep in the store

We received word within the hour that Knee Deep has been approved for sale on Steam! In other words, the game is greenlit--our greenlight campaign ends today in success!

Thank you for votes and comments that helped get us to this point. We're more excited than ever to share the game with you this summer. Make sure to follow the game to be informed of news and release date; you can also sign up for our newsletter at http://www.kneedeepgame.com/.

Read More
Swampland soundtrack: behind the music of Knee Deep
May 6, 2015 - Prologue Games

Chris Wilson, former Harmonix audio developer and one of the composers of the Knee Deep soundtrack, details the process behind creating music for a theatrical adventure game in a new blog post.[prologuegames.com]

Or, skip right on over to SoundCloud[soundcloud.com] to listen to a few of the tracks.

"One of the defining characteristics of film noir was the interplay of visuals and a musical score. The darkness and foreboding, the uncertainty of characters in difficult circumstances were expressed as much through music as images. So how do you take this approach with a swamp noir project like Knee Deep?

"We wanted acoustic recording to capture the sounds we wanted: old, broken-down, forgotten. eBay and Craigslist became our friends as searched for just the right instruments: a resonator guitar, a lap steel, an old Gregory practice amp from the 1950s, a no-name made in Japan drum set from the 1960s with the original creaky hardware, ugly sounding cymbals."

Knee Deep is a swamp noir adventure game told in three acts. Staged as a theatrical production, the game is a story-focused adventure in which your choices shape the fate of three playable characters.

Experience a magical reality where characters are transported among scenes, set pieces moved into place, and music wafts from the orchestra pit. Knee Deep is about characters, storytelling, and the melodrama of swampland Florida.

When a washed-up actor hangs himself on location, a spotlight is cast on the backwater Florida town of Cypress Knee. Your screen becomes a stage on which you investigate this mysterious suicide as three distinct characters: cheeky blogger Romana Teague, down-and-out local reporter Jack Bellet, and cynical private investigator K.C. Gaddis.

Each have been summoned to the town to uncover the story of Tag Kern's suicide, but are they prepared for the muck that lies beneath the town of Cypress Knee?

Headquartered in the beautiful state of North Carolina, the Prologue Games team starting making story-focused adventure games in 2014. The half-dozen-strong team has more than 40 years combined experience making games at places such as Unity, Icarus Studios, and Take 2. We're passionate about creating interactive stories that spotlight people, not puzzles.

Knee Deep has been Greenlit and is now listed in the Steam store. For the latest information, purchase options, and discussions for Knee Deep, please see it on the Steam Store or in the Steam Community.
Visit Store Page
For more details Visit Community Hub
For latest discussions
If you really, really want to, you can continue to the Greenlight page. Information on this page may be out of date, since all the action has moved to the areas noted above.