Greenlight > Games > 10tons's Workshop
Greenlight is being retired. For more information on how to submit games to steam, refer to this blog post.
This item has been removed from the community because it violates Steam Community & Content Guidelines. It is only visible to you. If you believe your item has been removed by mistake, please contact Steam Support.
This item is incompatible with Greenlight. Please see the instructions page for reasons why this item might not work within Greenlight.
Current visibility: Hidden
This item will only be visible to you, admins, and anyone marked as a creator.
Current visibility: Friends-only
This item will only be visible in searches to you, your friends, and admins.
Neon Chrome
Description Discussions2 Announcements6 Comments201

10tons
Offline
See all 30 collections (some may be hidden)

View Neon Chrome in the store

Neon Chrome was greenlit last night - a massive thank you to all! Meanwhile we've been working long hours towards the beta. At the moment it looks like we'll slip into January with the beta as we'd like to finalize some things before starting. Go to neonchromegame.com and leave us your e-mail for beta invites and other Neon Chrome news.

You can see the final stats from below. 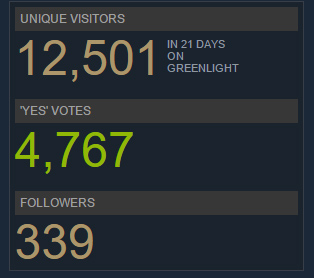 IndieDB is throwing an "Indie of the Year 2015" contest, and we'd really appreciate votes there too: Neon Chrome on IndieDB

Blast your way through walls with guns and cybernetic abilities and try alternate approaches with different roles like the Assassin or the Cyber Psycho. Upgrade your character stats, discover new cybernetic enhancements and build up strength to finally face the Overseer. Every death is a new beginning - the path to defeating the Overseer is never the same.

The cybernetic heart of Neon Chrome beats after each death and gives birth to a completely new path ending in a final battle. The Overseer controlling everything trusts his obedient minions to end the life of your asset before you reach him. Your path will be a mix of randomly generated futuristic environments and hand crafted challenges.

Your character will be a sum of your choices and a bit different each run. Visit your nearest CyberHance Express station and select from a choice of over four dozen cybernetic enhancements. The enhancements range from health and protection improvements to defense and assault systems - and far beyond.

Before each run you choose one of three randomized characters. In Neon Chrome we call these assets. Each one a bit different – everyone as good as dead. The asset is a unique combination of role, weapon, and ability. The sneaky assassin with mines or the robust corp soldier with incendiary grenades? The choice is up to you.

Almost everything in Neon Chrome can be destroyed with weapons or cybernetic abilities. You’ll shoot through walls, make rooms explode, and obliterate whole floors while blasting your way through the building.

Overcome the latest killing solutions ranging from armed security to lethal assault drones and cyborgs. The building hosts a small army and even devastating military robots. To make your way to the top you also need to overcome handcrafted combat and puzzle challenges.

If your local friends would like to help you bringing down the Overseer the backdoor to CryoNix corporation cryocenter allows the activation of multiple assets at once.

Armed with your skills, weapons, and cybernetic abilities you’ll have a fighting chance of defeating the Overseer. Go on, venture into the Neon Chrome and remember: Death is always a new procedurally generated beginning.


After voting you can go to www.neonchromegame.com and leave your e-mail to apply for beta access. We aim to have the game in beta in December 2015 and release early 2016.

Why no online multiplayer?
Darkness

javierucu Feb 11, 2016 @ 12:37am
Hi, I am a newbie soundtrack composer. I made a demo reel. Do you think my music is good enough for your game? https://www.youtube.com/watch?v=pA7fQzZ9gUU Thank you, sincerelly. cga.sound@gmail.com

10tons  [author] Feb 5, 2016 @ 12:22am
Yes, the game is progressing very well. We're starting to test it extensively on gamers outside the company to verify if the game is ready or not. A Q2 release is looking likely.

Neon Chrome has been Greenlit and is now listed in the Steam store. For the latest information, purchase options, and discussions for Neon Chrome, please see it on the Steam Store or in the Steam Community.
Visit Store Page
For more details Visit Community Hub
For latest discussions
If you really, really want to, you can continue to the Greenlight page. Information on this page may be out of date, since all the action has moved to the areas noted above.