Greenlight > Games > Spoonweaver's Workshop
Greenlight is being retired. For more information on how to submit games to steam, refer to this blog post.
This item has been removed from the community because it violates Steam Community & Content Guidelines. It is only visible to you. If you believe your item has been removed by mistake, please contact Steam Support.
This item is incompatible with Greenlight. Please see the instructions page for reasons why this item might not work within Greenlight.
Current visibility: Hidden
This item will only be visible to you, admins, and anyone marked as a creator.
Current visibility: Friends-only
This item will only be visible in searches to you, your friends, and admins.
Tim-Tim 2: "The Almighty Gnome"
Description Discussions0 Announcements1 Comments24 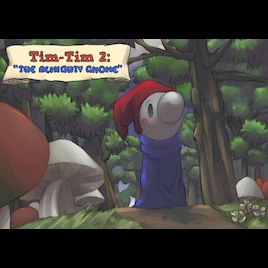 I'm trying to get things ready for a an end if the year release. Don't hold me to that though.

This is the sequel to the little known game, Tim-Tim "The Mighty Gnome". Tim-Tim began life as a D&D character but has since become better known as a video game character. This character has gain a bit of popularity in the game development community for the o.h.r.rpg.c.e. Despite this not being an rpg, it is made with an rpg creation engine. Why it wasn't made without another easier engine remains unknown even to the creator of the game.

Tim-Tim 2: "The Almighty Gnome" seeks to out do the original in every way. However, the original will likely still say a lot about what this game seeks to be. The original game is free to download for the PC and is also available on OUYA.

In this game, you play as Tim-Tim, a gnome wizard on a quest to battle Satan. Tim-Tim has to collect spells, items and gold in order to become powerful enough to stop the hordes of demon dinosaurs from overwhelming his home. Tim-Tim is sent from the clouds by a large bearded man to find out what has changed to cause all these demon related attacks.

Vitar Mar 25, 2015 @ 7:06am
this looks like something I would like with a weird skin over it. if you leave the voice over out of the final game I'm buying xD