Greenlight > Concepts > tj.townsend79's Workshop
Greenlight is being retired. For more information on how to submit games to steam, refer to this blog post.
This item has been removed from the community because it violates Steam Community & Content Guidelines. It is only visible to you. If you believe your item has been removed by mistake, please contact Steam Support.
This item is incompatible with Greenlight. Please see the instructions page for reasons why this item might not work within Greenlight.
Current visibility: Hidden
This item will only be visible to you, admins, and anyone marked as a creator.
Current visibility: Friends-only
This item will only be visible in searches to you, your friends, and admins.
Pythetron
Description Discussions0 Announcements1 Comments2 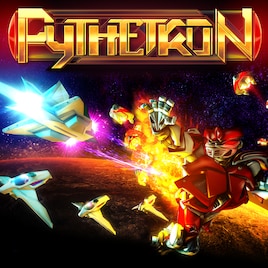 Read More
Description
Alpha version can be downloaded and played at the Pythetron website.

The Game
Pythetron is a new evolution in the old school 2d shoot'em up (or shmup) genre built on a modern game engine utilizing advanced physics and 3d environments, with detailed models, animation, and sound. Pythetron takes a new direction in gameplay by allowing the game's pacing to be controlled by the player and allowing the player to explore the galaxy in a non-linear manner by earning stars and unlocking new worlds.

During your journey across the galaxy you will earn coins to upgrade your ship's defense, speed, and offense, including many different projectile upgrade paths. You can progress through the game by perfecting speed strategies that earn multiple stars per run, or by exploring every corner of the galaxy in search of stars one at a time.