Greenlight > Games > dos's Workshop
Greenlight is being retired. For more information on how to submit games to steam, refer to this blog post.
This item has been removed from the community because it violates Steam Community & Content Guidelines. It is only visible to you. If you believe your item has been removed by mistake, please contact Steam Support.
This item is incompatible with Greenlight. Please see the instructions page for reasons why this item might not work within Greenlight.
Current visibility: Hidden
This item will only be visible to you, admins, and anyone marked as a creator.
Current visibility: Friends-only
This item will only be visible in searches to you, your friends, and admins.
The Secret of Tremendous Corporation
Description Discussions0 Announcements3 Comments65 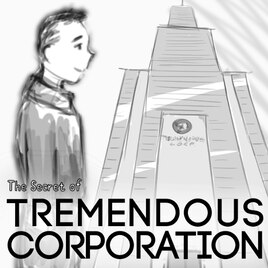 Klonrad
Offline
See all 10 collections (some may be hidden)

View The Secret of Tremendous Corporation in the store

With Tremendous Thanks
Tremendous Corporation and the devteam :)

You might have noticed the previous message from Tremendous Corporation. Don't trust them. That's just one of their typical brainwashing techniques.

It was tough, but we found a way to crack into Tremendous Corp's systems and regain the control on our game. Huge thanks to our friends from the Indie Rebel Movement for all the help!

There are two things Tremendous Corp. got right in their message. Yes, we got 500 yes votes, and yes, we planned to release this game as free software (a.k.a. open source). In fact, we still do!

Also, thanks for all of the support we've received so far! It definitely has boosted our egos! We didn't even know that it was possible to boost it any further!

However, in order to be greenlit, we still need more votes. If you like this game, share it to your friends so you can like it together. There's nothing more bounding than liking the same black and white, hand drawn point-and-click adventure game on Greenlight. It's like establishing a brotherhood. We're not kidding, try it by yourself!

Let's take Tremendous Corporation down and bring the gaming its full glory back.
¡Viva la Indievolución!

Read More
Description
Release date: It's released!
A game about games, secrets and stuff.
In the near future, thanks to copyright and patent law abuse, all of the gaming industry became controlled by one corporation, producing low quality but highly profitable casual freemium games and ceasing development of any other more ambitious genres. Any game development outside of the company became outlawed, ending the era of indie games.

Assist young Max Burton, a mighty gamedev wannabe and enthusiastic fresh intern on his first day at his first job in the only gamedev company out there in this short, (soon to be) award-winning free point-and-click adventure game. Explore the deepest SECRETs™ of the Tremendous Corporation®. Find out what happened to indie devs and save the gaming industry!

The first version of this game has been made during Global Game Jam 2015 under the name "The Game Jam Game About Games, Secrets and Stuff".
< >
65 Comments

dos  [author] Oct 16, 2015 @ 11:31am
Just Groupees. The early leaked announcement of what games will be included in the bundle was enough to create pageview spike that resulted in greenlighting :)

Also congrats on the greenlight :)

So 'lazy thumbnail sketch' is your game's aesthetic choice, you say?

The Secret of Tremendous Corporation has been Greenlit and is now listed in the Steam store. For the latest information, purchase options, and discussions for The Secret of Tremendous Corporation, please see it on the Steam Store or in the Steam Community.
Visit Store Page
For more details Visit Community Hub
For latest discussions
If you really, really want to, you can continue to the Greenlight page. Information on this page may be out of date, since all the action has moved to the areas noted above.