Greenlight > Games > Squad Dev Team's Workshop
Greenlight is being retired. For more information on how to submit games to steam, refer to this blog post.
This item has been removed from the community because it violates Steam Community & Content Guidelines. It is only visible to you. If you believe your item has been removed by mistake, please contact Steam Support.
This item is incompatible with Greenlight. Please see the instructions page for reasons why this item might not work within Greenlight.
Current visibility: Hidden
This item will only be visible to you, admins, and anyone marked as a creator.
Current visibility: Friends-only
This item will only be visible in searches to you, your friends, and admins.
Squad
Description Discussions215 Announcements36 Comments3137 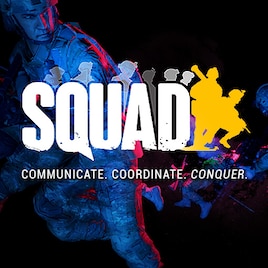 BuLL
Offline
See all 457 collections (some may be hidden)
Kickstarter

View Squad in the store

Heads up, a new version is inbound: Version 5.1! We’re back from hunting those pesky chocolate rabbits, and we bring some additional stability to Squad, in the form of client and server crashes, gameplay improvements, and revised UI elements.
Before we begin on the goodies we want to extend our thanks to all the people in the community, who have helped us fix some of these issues through sending us server logs, pictures of bugs, and improvement ideas, your help has been greatly appreciated.

Hi Squaddies,
Head up, a new version is inbound! Version 5.0 comes packed with a number of UI and quality of life improvements to help smooth out your experience in-game, as well as a number of balance and performance tweaks, not to mention a whole slew of additional expanded areas for maps that are currently in rotation. Read the full changelog below!

Read More
Description
Release date: Early 2016
ALONE ON THIS BATTLEFIELD, YOU WILL NOT SURVIVE.
Welcome to Squad.

Squad is an online, team-based military themed first-person-shooter where high levels of teamwork and communication are crucial to success.

Built from the ground up in the Unreal Engine 4, Squad pits teams of up to 50 players against each other in white knuckle modern day combined-arms combat scenarios, with both conventional and unconventional forces.

The players dictate how the scenarios unfold with base-building and interactive environments, intuitive squad command and management tools and large-scale warfare where strategy and leadership are just as important as a quick trigger finger.

VISIT SQUAD ONLINE
Join us at {LINK REMOVED}http://www.joinsquad.com for extensive coverage of the last year's worth of development, and jump into our forums to interact directly with the Dev Team. We've been reading and connecting with everyone in the forums for a year, and hope to see you join us in the conversations today.

FEATURES
IMMERSIVE, REALISTIC COMBAT. With advice from former and current service personnel, we aim to deliver a completely immersive combat experience like no other. You’ll hear the buzz of rounds pass nearby and almost feel the intense gut churning reality of combat.

ALL FOR ONE, ONE FOR ALL. The base unit of Squad is not the individual, but the 9-man squad. Gameplay systems honed over years of experience with the Project Reality series draw the focus away from the lone-wolf player and much more on the cooperation with other members of your squad.

OPEN, EXPANSIVE LEVELS. Most of our maps will come directly or be heavily inspired from real world locations through Geographic Information Systems (GIS) satellite data, where authenticity and total tactical freedom to roam will always be part of the game.

MASSIVE 100 PLAYER SERVERS. 50 on 50, in countless squad combinations, all vying for control over an expansive battlefield.

SCALABILITY. Squad can be enjoyed on a much smaller scale with more concentrated fighting areas and tighter player counts, but still offers the freedom, tactical maneuverability and opportunities for team-play that are the hallmarks of the game.

KIT ROLE SYSTEM, be it a machine gunner, sniper, grenadier, APC-crewman, helicopter pilot, squad-leadership, construction engineer, medic, forward observer or even a plain old rifleman, every role has a part to play in the battle. This clear division of responsibilities greatly helps the experience as no one soldier can possibly do the job of an entire army. Personal progression is not measured by how shiny your weapon is, but how flexible you are in mastering all the different battlefield professions.

PLAYER-DRIVEN SPAWN-POINT AND BASE-BUILDING, which makes the front-lines of every match a unique experience. Players who prefer to construct rather than destruct have the capability to build fortifications and strong points for the team, and often play as important if not greater role than the ones doing the shooting.

LOGISTICS AND RESUPPLY SYSTEM, realised through your team's network of player-placed Forward Operating Bases (FOBs) and Rally Points (RPs) to support your front-lines. Whether its ensuring a clear path between your main base and your forward bases, or risking the gauntlet and delivering supplies by helicopter or truck, a supply system controls what weapons are available at your Forward Operating Bases, and even how much you can fortify your spawn points. Defending friendly and eliminating enemy Supply Lines, FOBs and RPs become just as important as putting troops into the Objective Zones on the map.

COMBINED ARMS WARFARE. Join a tank crew, be an unstoppable force in a CAS helicopter with your co-pilot or even run logistics and build fortifications, there are many ways to make your mark on the battlefield. From grunts to motorcycles to APCs to attack helicopters and everything in between, we offer gameplay systems that make multilayered teamwork enjoyable and rewarding without the need to join private communities.

BALLISTICS AND SIGHTS. Server side, simulated Newtonian physics with our custom physics engine code. From small arms to grenade launchers, mounted machine guns to dumb-fire rockets, we aim to have working sights that significantly up the level of immersion when it comes to firing your weapon.

INTEGRATED POSITIONAL VOIP COMMUNICATION, no need for third party programs, we're using the most effective codecs in-game. Speaking to other squad leaders across the map, or even the man next to you couldn't be easier.

ALL THE TOOLS NEEDED FOR INTRA-SQUAD AND INTER-SQUAD COMMUNICATION built into the game. In the last ten years, the industry has moved away from providing proper command and communication features available out of the box. Squad will fix this.

TRUE FIRST PERSON CHARACTERS. (aka ‘body awareness’) character models, there won’t be walking gunheads here. Your first person movements will be the exact same as seen by other players in third person. There are no rigged 1P arms for your on screen infantry character, the entire character body is modeled and viewable at all times.

A MEDICAL SYSTEM REFINED through 10 years of gameplay history. A revival system balanced to make medics and casualty evacuation an extremely critical part of the game, and with features like dragging coming to Squad, saving your buddy in the midst of battle is an experience like no other.

ASSAULT AND SECURE, an objective zone based game mode that promotes a defined 'front-line' style of combat. The objectives also are regenerated every round, so no two sessions will ever play the same. We plan to have many more game modes to come!

ADMINS SPECTATOR MODES AND OVERVIEW PANELS to allow administration teams the tools required to own, operate, and oversee their servers.

REFINED MACHINIMA/FILMING TOOLS designed by film enthusiasts for ease of use, to allow for high quality machinima or gameplay videos.

SUPPORT FOR MODDERS AND MISSION DESIGNERS FROM DAY ONE of retail release. The Squad developers are paying it forward and will provide reference and frameworks for hobbyist modders and mission creators, and paid commissions for qualified mod teams.

SUPPORT FOR TEAM TOURNAMENTS AND LADDERS. Both large scale 50v50 matches for public and clan ladders, and 5v5 and 8v8 on specifically designed smaller maps, allowing tournaments that can take full advantage of the Unreal Engine 4 framework, animations, weapons and ballistics systems to challenge the competitive FPS standard for the last several years.

A DEVELOPMENT PROCESS OPEN TO EARLY BACKERS having direct access to the Dev Team during testing sessions and monthly live-streams. This was a mainstay of our decade of modding, and we're adding live-streaming to show off the process as we go, and will continue to be a way for the community to get direct access to the game as it develops and evolves, and for the Devs to get in the trenches and have some fun and get feedback on the gameplay as we implement and test planned features.
< >
3,137 Comments

Squad has been Greenlit and is now listed in the Steam store. For the latest information, purchase options, and discussions for Squad, please see it on the Steam Store or in the Steam Community.
Visit Store Page
For more details Visit Community Hub
For latest discussions
If you really, really want to, you can continue to the Greenlight page. Information on this page may be out of date, since all the action has moved to the areas noted above.