Greenlight > Games > milkbaggames's Workshop
Greenlight is being retired. For more information on how to submit games to steam, refer to this blog post.
This item has been removed from the community because it violates Steam Community & Content Guidelines. It is only visible to you. If you believe your item has been removed by mistake, please contact Steam Support.
This item is incompatible with Greenlight. Please see the instructions page for reasons why this item might not work within Greenlight.
Current visibility: Hidden
This item will only be visible to you, admins, and anyone marked as a creator.
Current visibility: Friends-only
This item will only be visible in searches to you, your friends, and admins.
FutureGrind
Description Discussions2 Announcements3 Comments178 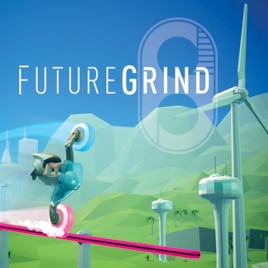 milkbaggames
Offline
See all 5 collections (some may be hidden)

View FutureGrind in the store

FutureGrind was Greenlit this morning! Thank you to everyone who voted for the game. We're excited to be able to bring the game to Steam when it's done!

Thanks again for all the votes and the amazing comments! Keep 'em coming! Tell your friends! :)

I thought I'd post a couple more awesome environment concepts done by Simon Kono. These are for environments not seen in the teaser video. So mysterious...

Read More
Description
Release date: Early 2016
The Game
FutureGrind is a game all about skill, tricks, and speed. We think it’s a bit like Uniracers meets OlliOlli. The game is played on a track made of rails that run through a 3D environment: some rails are blue, some are red, and some are white.

The Grinder
As the player, you control a futuristic, motorcycle-sized vehicle called a “grinder”. Your grinder has two wheels: one blue, and one red. You have to get from the start of the track to the end in one piece, while scoring the most points possible.

Skill-Based Gameplay
Survival is important in FutureGrind, but it’s really just the baseline. In order to succeed, you’ll need to get good at doing chains of tricks. Points are awarded to you based on how you grind on the rails. Balance on top of a rail for a Manual. Boost up into the bottom of a rail for an Undergrind. Dangle from the top of a rail for a Hanger, and so on. Rack up long grinds to increase your score. Do flips in the air for big points. Transfer between rails flawlessly to build your chain multiplier. Only skilled players will earn endorsements from The Sponsors and progress through the game.

Collaborations
We've been working with the amazingly talented bignic to write a full original soundtrack for FutureGrind. You can hear some of the music in the teaser video above. If you want to hear more, there's a brand new 4-track FutureGrind EP[bignic.bandcamp.com].

We've also been working with Simon Kono (the artist on Mushroom 11) to create concept art for the game. His art has helped shape the visual direction for the game and defined the style of the grinder. He has been doing amazing stuff!

Midgetastical Mar 10, 2015 @ 10:59pm
I suck at rythm/racing games, but this looks amazing, and from what I can gather will have a great soundtrack as well, which is a big thing in simple games like these. would definitely want.

FutureGrind has been Greenlit and is now listed in the Steam store. For the latest information, purchase options, and discussions for FutureGrind, please see it on the Steam Store or in the Steam Community.
Visit Store Page
For more details Visit Community Hub
For latest discussions
If you really, really want to, you can continue to the Greenlight page. Information on this page may be out of date, since all the action has moved to the areas noted above.