Greenlight > Games > Peter's Workshop
Greenlight is being retired. For more information on how to submit games to steam, refer to this blog post.
This item has been removed from the community because it violates Steam Community & Content Guidelines. It is only visible to you. If you believe your item has been removed by mistake, please contact Steam Support.
This item is incompatible with Greenlight. Please see the instructions page for reasons why this item might not work within Greenlight.
Current visibility: Hidden
This item will only be visible to you, admins, and anyone marked as a creator.
Current visibility: Friends-only
This item will only be visible in searches to you, your friends, and admins.
D.U.S.T.
Description Discussions14 Announcements8 Comments545 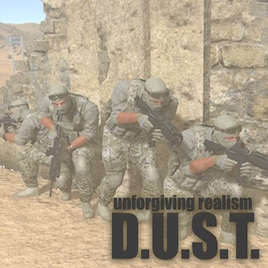 Peter
Offline
See all 34 collections (some may be hidden)

We released on the 19th October!

Thanks to everyone for supporting us!

So, another multiplayer FPS that claims to be "real", what's the deal?
There are hundreds of them and we all know that realism isn't really there. There are few that comes close, but not quite there. Hell, I was so into realism that I eventually decided to make one instead of looking. D.U.S.T. was not made to be better and more "real", it was made to do it right. So here is a brief feature list.


Total control weapon.
Pull the charging handle, slap the bolt catch. Turn the elevation dials and set the focus on scopes. Gone are the days of a weapon that is capable of reality bending physics. Our motto is, If you can do it real life, then you can also do it in DUST. If it is missing, even the smallest thing, let us know and we will add it.


Physics driven ballistics.
That means gravity, windage, coriolis effect, air resistance, ricochet, fragmentation etc. Everything should be there is there


One shot, one kill gameplay.
Gone are the days of health regeneration or a number driven health system. A bullet will and definitely kill you.


Unlimited view distance.
That means no more fogs, no more popping in enemies. There is just realistic atmospheric scatter.


Total Weapon Modification
Having the ability to change scopes and suppresors is not considered enough. D.U.S.T. allows you to change the barrel, twist ratio, thikness, trigger, bolt carrier group, scopes, grenade launchers, handles, rails, magazines, round grain types and so on. We are actively adding and widening the modification level.

NOTE: THIS GAME IS GOING CLOSED ALPHA AS OF FEB 14th

When and Where Can I Play DUST?
Simple. You can play it right now. Visit our website {LINK REMOVED}www.terapoly.com and download the game and play it.
We do this because we don't really have a reason to have this game developed in secret and released as a surprise. We really don't because a game like this needs many inputs and feedbacks from its playerbase throughout its entire game life. We can't really hear you guys if the game isn't accessible, can we?

Now, to be honest, as developers, we see that the game has reached a point where its basic infrustructures are set, and is entering a phase where it needs larger player base to improve further on. But this doesn't necessarily mean that the game is ready ready. It just means that it is ready to be reviewed and improve with constructive criticism. There is only so much a developer can do to make a multiplayer better without a player base.

By now, if you are a tactical shooter lover, then a download link is the logical step. Visit our website {LINK REMOVED}www.terapoly.com to donwload the game.

Also, make sure you read the field manuals before entering a game. I promise you, everybody needs training.
You can find the FMs here.

lastly, I will be super honest. The game will be full of bugs given that it was made by very small team and had no extensive testers. In fact, you guys are the game's testers...extend love and support for us. We will slowly evolve and get the game to a true AAA standard, but we need your support and playership.

We promise you, we will be just glad to hear your thoughts...

Say goodbye like you mean it Sep 30, 2017 @ 12:51am
Dude I just found this game and it said it had been removed from steam store. Is it possible that I can buy the game key from anywhere? I am so interested in your game and it just looks incredible. I feel sorry that I didn't find it and buy it earlier

Whopper Jr. Aug 16, 2015 @ 7:06pm
Since Receiver I dream with realistic gun handling in games, I just wish there are some handguns available :)

D.U.S.T. has been Greenlit and is now listed in the Steam store. For the latest information, purchase options, and discussions for D.U.S.T., please see it on the Steam Store or in the Steam Community.
Visit Store Page
For more details Visit Community Hub
For latest discussions
If you really, really want to, you can continue to the Greenlight page. Information on this page may be out of date, since all the action has moved to the areas noted above.