Store Page
Warframe > Guides > ⎛Odeusus.exe⎞'s Guides
This item has been removed from the community because it violates Steam Community & Content Guidelines. It is only visible to you. If you believe your item has been removed by mistake, please contact Steam Support.
This item is incompatible with Warframe. Please see the instructions page for reasons why this item might not work within Warframe.
Current visibility: Hidden
This item will only be visible to you, admins, and anyone marked as a creator.
Current visibility: Friends-only
This item will only be visible in searches to you, your friends, and admins.

How to Hek? (6 Forma)
By ⎛Odeusus.exe⎞
A build for Hek made to mow down entire squads of enemies down in a few shots.. :D

Comments
Description:
''The Hek is a powerful shotgun that fires its shots with a tight spread, making it efficient at medium range as long as its strong recoil is properly managed.'' - ingame description of the Hek.
The hek is a shotgun by grineer design and is also used on Councilor Vay Hek on the right arm of his battleframe. And is also used by a member of the Gustrag Three named Vem Tabook.
The Hek is one of the highest hitting shotguns ingame and has a smaller cone (thus less spread) then other shotguns, the only downside is it has only 4 shells each mag and takes some time to reload. 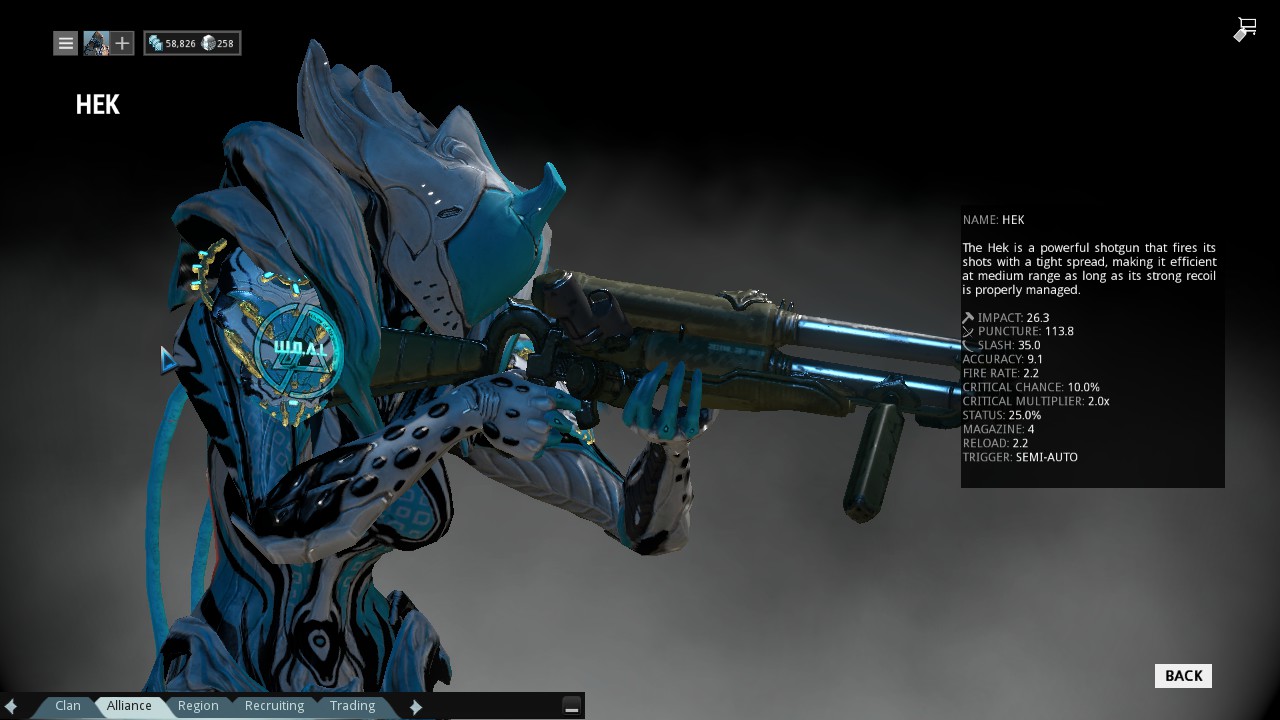 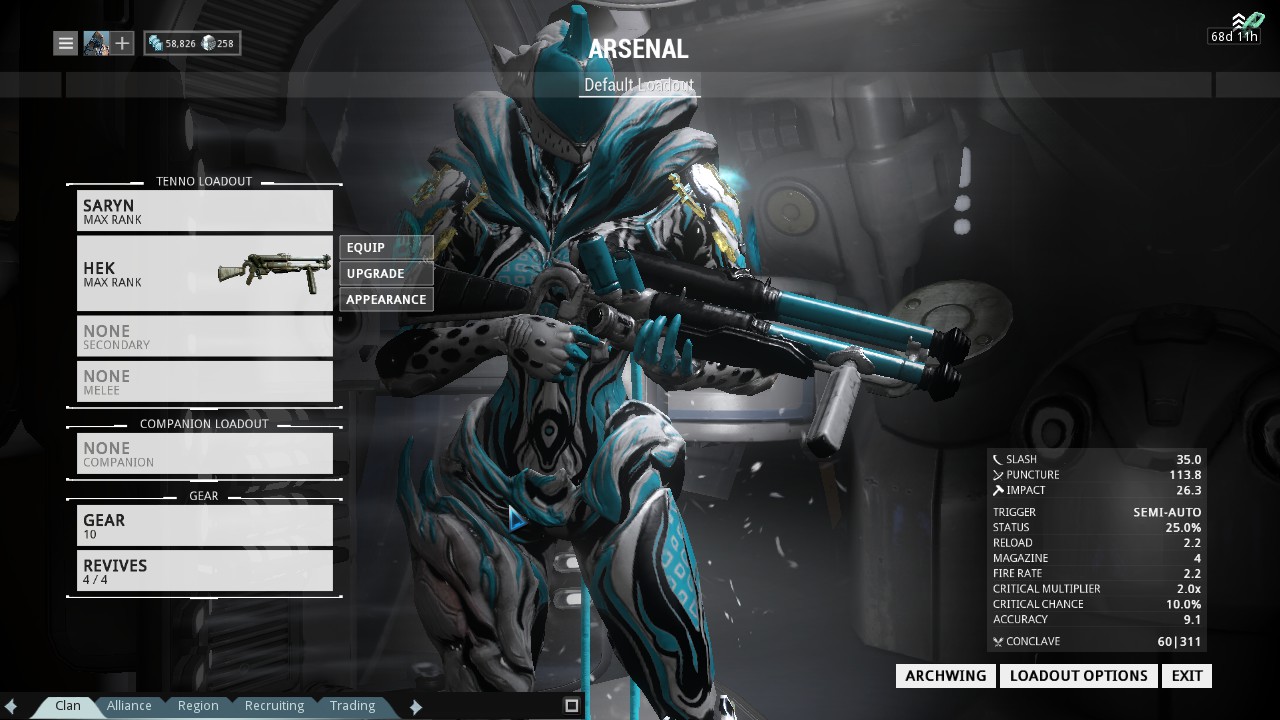 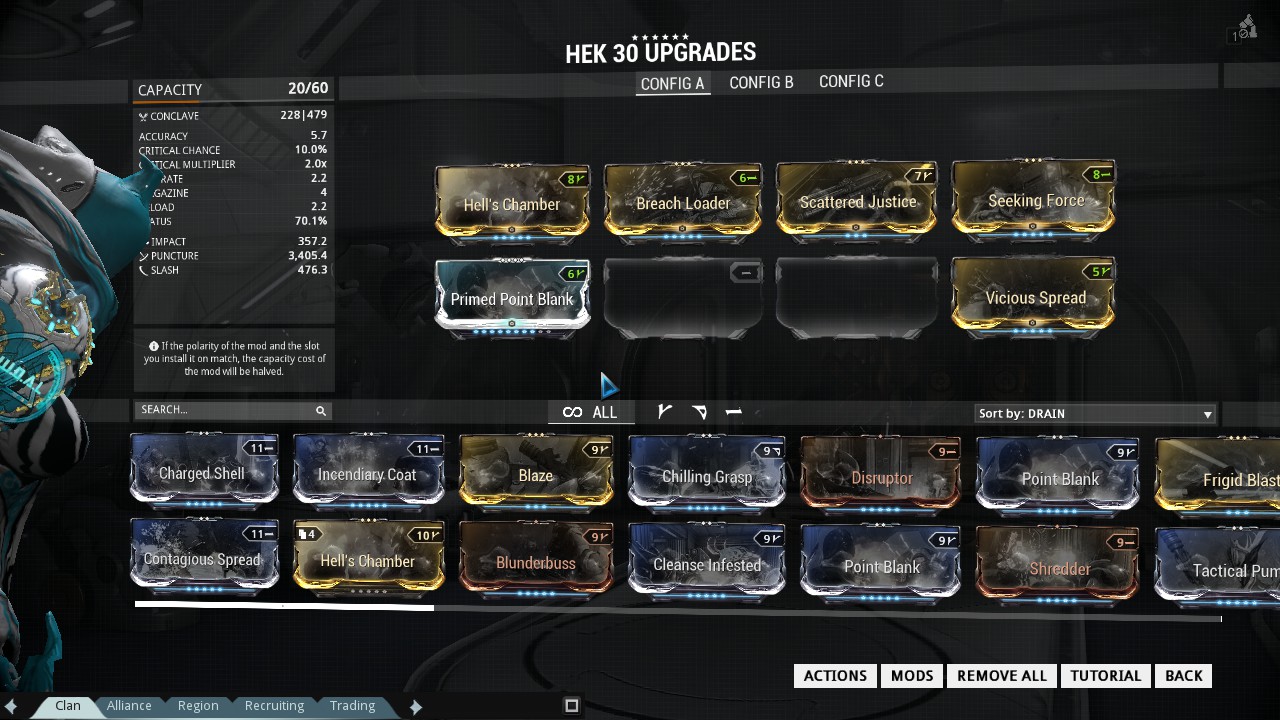 The 2 empty slots are for elements who switch according to the faction you're fighting.

- Maxed hell's chamber and scattered justice: to get a 320% multipshot, making every shot you fire have 29+ a 40% chance to fire a 30th pellet. Every pellet has it's own chance to cause status or a crit, so the more you have the more procs/crits :D. Scattered justice also makes you send out a pulse which restores 25% of your hp and temporarly increases your armor by 25% too, and deals 1000 blast damage to enemies and stuns them. The stun makes them vulnerable for a short time against finishers (like banshee's silence does) This effect occurs each time you get 2.000 affinity ingame while having the Hek out.

- Maxed breach loader: Adds 120% puncture damage, use this because Hek's primary damage is puncture so it will give you alot more damage.

Seeking force: Adds 2.1 punch through, so bullets penetrate targets and makes you hit other targets behind them. VERY usefull when there are alot of enemies in a small hallway all piled up on eachother, then you jsut charge in with your Hek and shoot a few times :D

- Maxed viscious spread Adds 90% damage increase and also adds 60% spread. Spread decreases the accuracy of the Hek, thus increasing the cone it fires. Because the hek fires so many pellets at once (28-29) low accuracy (big cone) can be a good thing. You will be able to hit alot of enemies at once, basicly you can close your eyes and fire since you will always hit something in a room :D. 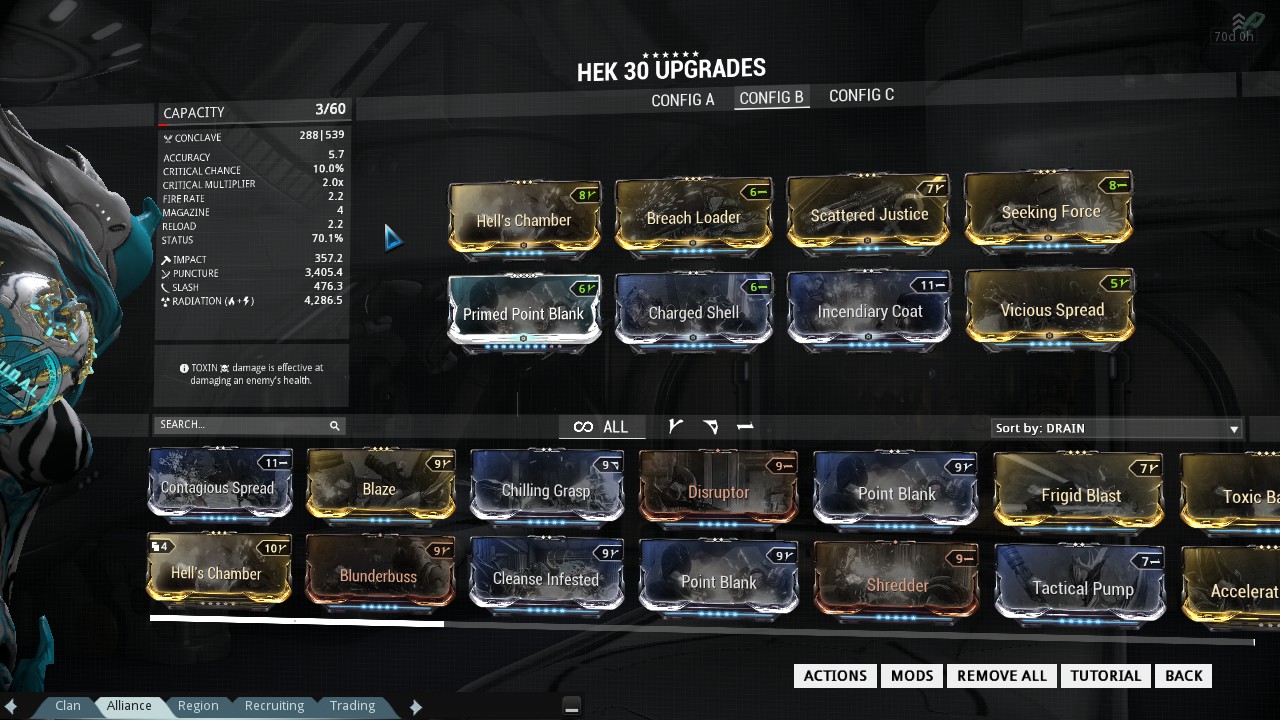 Add the following elements to the basic build:

Fire + electric: creates radiation which increases by 75% to bombards and napalms
Corpus build: 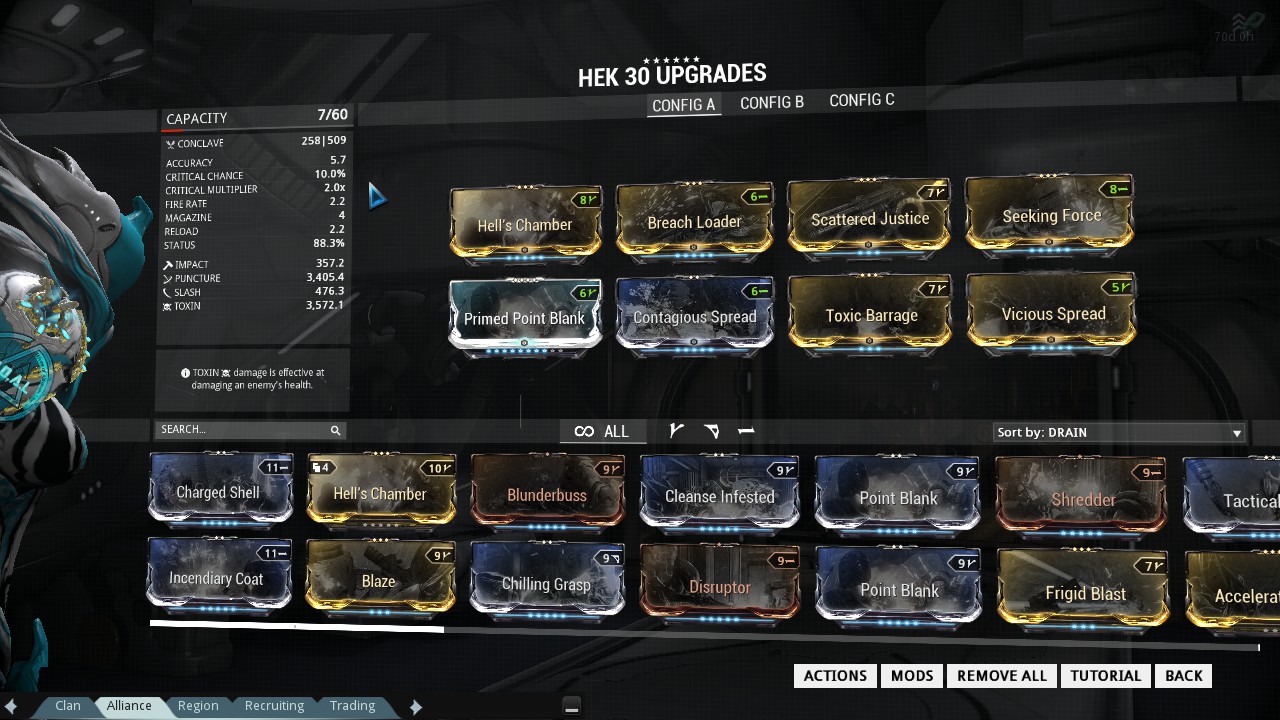 Then add the following element:

Toxin: Ignores shields and directly damages hp, making it highly effective against corpus, since they have high shields and low hp.
Infested build: 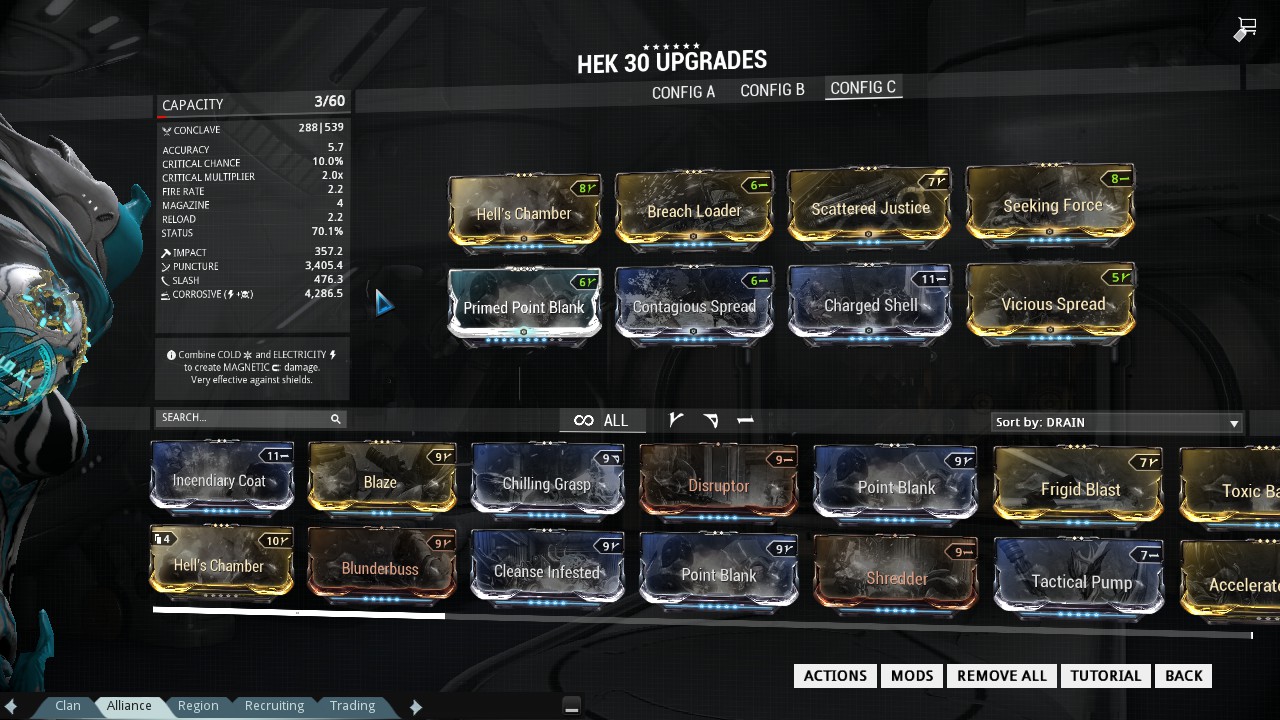 Add the following elements for infested:

Electric + toxin: creates corrosive, gives and 75% damage boost to any ancient infested which is the strongest enemy in the infested faction.
Void build:
Because of the new enemies that have been added to void it's really up to you which element you wanna use. Use corrosive (infested build) if you're having a hard time killing the heavy gunners and ancient healers. Or use radiation if you're struggeling with the bombards and MOA's (Grineer build). Personally I use radiation in void, I am having a hard time fighting dem bombards!!!
P.S.
If you feel like something is missing/wrong feel free to comment about it!
Also if you liked the guide/build or even better if you had to the reaction to it as in the video above, then it would be great if you could rate and favorite my guide/build^^
Because you gotta love those gold stars :D
Clan promotion:
We're a mountain clan called Acts of Honour with 110+ active members, and we're currently looking for new members! 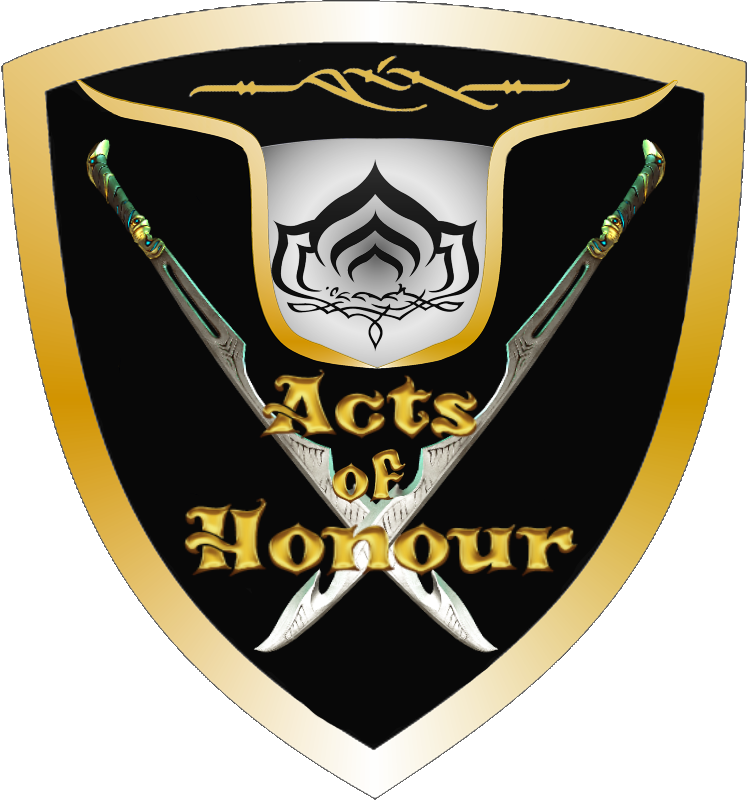 - Completely decorated and polychromed dojo with all rooms & research finished.
- No mastery rank or any other sort of requirement.
- No obligations such as donating (we're just here to have fun ^^).
- (very low) 5% clan tax to aid in future clan projects.
- Beautiful alliance & clan emblem
- A few high mastery players ready to helpyou out with w/e you need.
- Teamspeak 3 server for both clan and alliance members

So if you would like to join up with us, please join the public steam group linked below.
Once you're in just comment your username and make sure you're not in a clan already and you will be invited to the clan in warframe :D

http://steamcommunity.com/groups/Acts-of-Honour
Alliance promotion:
We've also got an alliance called Echoes of the Lost Age that's all about having fun together!

- No obligations or requirements needed, any clan of any rank & size is welcome to join ^^
- Teamspeak 3 server avaible for everyone in the alliance.
- Clan leaders get their own clan room in teamspeak complete with maximum admin power in that room.
- Nice alliance emblem for all to enjoy :D


So if you're interested in joining our alliance, join the public steam group linked below.
Just comment your clan name in the group, and make sure your clan isn't in an alliance already. You will get an invite in no-time :D

Kirbmyster Aug 29, 2016 @ 8:27am
Ok, let me make it clear then, My Old build didn't use status mods (I recently changed it to get that extra little bit of damage) and I did use status only mods (so specificly mods that only gave status chance) You have to excuse how the hell I said it, at the time it was like 6am and I'd been up quite a while. my bad on that part.

⎛Odeusus.exe⎞  [author] Aug 28, 2016 @ 11:46am
Yeah the stats are outdated (before the rework), and if you use the status mod you need little to none forma's. Tho the Hek doens't matter anymore now with the sancti tigris being here sadly...
< >