Greenlight > Games > 76561197999919255's Workshop
Greenlight is being retired. For more information on how to submit games to steam, refer to this blog post.
This item has been removed from the community because it violates Steam Community & Content Guidelines. It is only visible to you. If you believe your item has been removed by mistake, please contact Steam Support.
This item is incompatible with Greenlight. Please see the instructions page for reasons why this item might not work within Greenlight.
Current visibility: Hidden
This item will only be visible to you, admins, and anyone marked as a creator.
Current visibility: Friends-only
This item will only be visible in searches to you, your friends, and admins.
Five Nights at Freddy's 3
Description Discussions8762 Announcements5 Comments32767 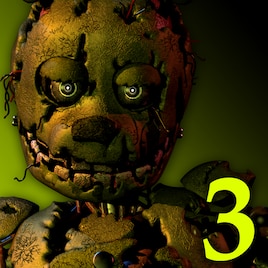 View Five Nights at Freddy's 3 in the store

Five Nights at Freddy's 3 had it's first round of beta-testing the other night. I have two faithful beta-testers who always help me out (mmost of yyou probably know who they are). The game still nneeds aa lot of work of course; it's still very bare bones at the mmomeent, but the game succeeded iin making my testerss jump out of their sseats. One of the features I didn't warn them about were the **************, which they found very effective. ;) PPlus "he" was much more aggrressiive than I'd annticipated and prevented my testers from ggetting past nightt 2. All in all, however, everrything went very well aand I'm on track to release the game as pplanned. :)

Read More
Description
Thirty years after Freddy Fazbear's Pizza closed it's doors, the events that took place there have become nothing more than a rumor and a childhood memory, but the owners of "Fazbear's Fright: The Horror Attraction" are determined to revive the legend and make the experience as authentic as possible for patrons, going to great lengths to find anything that might have survived decades of neglect and ruin.

At first there were only empty shells, a hand, a hook, an old paper-plate doll, but then a remarkable discovery was made...

Goldengabi(not spooky sponsored) Aug 19 @ 7:19am
when is this coming out

Five Nights at Freddy's 3 has been Greenlit and is now listed in the Steam store. For the latest information, purchase options, and discussions for Five Nights at Freddy's 3, please see it on the Steam Store or in the Steam Community.
Visit Store Page
For more details Visit Community Hub
For latest discussions
If you really, really want to, you can continue to the Greenlight page. Information on this page may be out of date, since all the action has moved to the areas noted above.