Greenlight > Games > XformGames's Workshop
Greenlight is being retired. For more information on how to submit games to steam, refer to this blog post.
This item has been removed from the community because it violates Steam Community & Content Guidelines. It is only visible to you. If you believe your item has been removed by mistake, please contact Steam Support.
This item is incompatible with Greenlight. Please see the instructions page for reasons why this item might not work within Greenlight.
Current visibility: Hidden
This item will only be visible to you, admins, and anyone marked as a creator.
Current visibility: Friends-only
This item will only be visible in searches to you, your friends, and admins.
Super Man Or Monster
Description Discussions7 Announcements2 Comments148 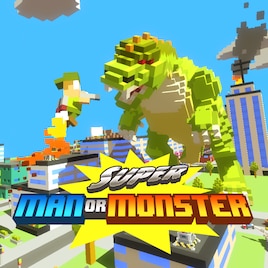 XformGames
Offline
See all 23 collections (some may be hidden)

View Super Man Or Monster in the store

Thanks for all your support so far!
We just uploaded some new screenshots and rearranged the video/screen order. You might get a better/faster look at (new) content.

More importantly we will be attending GamesCom 2015 with a playable build of the game!
If you are brave enough you can even try out a mission with the Oculus Rift! Get the feeling you are actually being stomped on!

We're at the Holland Pavilion in Hall 3!

You can now vote to get Super Man Or Monster on Steam! We hope you guys like the new footage and screenshots. We're busy working on new features and plan to anounce those soon. In the meantime: please share and support this game! Thanks!

P.S. Don't forget you can also check SuperManOrMonster.com for updates!

Read More
Description
Release date: 2017
What is it?
Super Man Or Monster is an exciting new 3D third person action game. The player chooses if he wants to fight with the humans to protect, or the monsters to destroy the world! As a man, it’s a great mix between a shooter and an RTS game: Build your army. Blast monsters and fly around with your jetpack. Kick ass. As a Monster, it’s a bash, stomp and beat ‘em up: Wreck the city. Bring chaos. Let your inner monster roam free.

History
The initial idea for Man Or Monster came from the guys over at Miniclip a while ago. They were really keen on doing a Minecraft-like style game. We examined that style closely, but realized that we didn’t want to just copy the look, style and feel. So we investigated how we could make it more our own thing. We kept the cubic style, got rid of the low-resolution textures and added a nice bright retro style to it. We’re big fans of 8 and 16 bit games and we hope that we created something that brings back those days, only now in 3D!

Super Man Or Monster has been Greenlit and is now listed in the Steam store. For the latest information, purchase options, and discussions for Super Man Or Monster, please see it on the Steam Store or in the Steam Community.
Visit Store Page
For more details Visit Community Hub
For latest discussions
If you really, really want to, you can continue to the Greenlight page. Information on this page may be out of date, since all the action has moved to the areas noted above.