Greenlight > Games > danbo's Workshop
Greenlight is being retired. For more information on how to submit games to steam, refer to this blog post.
This item has been removed from the community because it violates Steam Community & Content Guidelines. It is only visible to you. If you believe your item has been removed by mistake, please contact Steam Support.
This item is incompatible with Greenlight. Please see the instructions page for reasons why this item might not work within Greenlight.
Current visibility: Hidden
This item will only be visible to you, admins, and anyone marked as a creator.
Current visibility: Friends-only
This item will only be visible in searches to you, your friends, and admins.
BLUE REVOLVER
Description Discussions4 Announcements5 Comments125 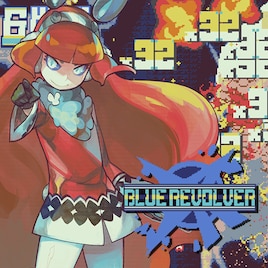 woof
Offline
See all 25 collections (some may be hidden)

View BLUE REVOLVER in the store

Hi everyone, and thanks for your patience regarding announcements.

As of a day or two ago, we're officially content complete and in the final phase of bugfixing and private beta playtesting. This has been a long time coming, but we think it's very close to being ready now.

You can read a bit more about the full game's features on our updated website : http://bluerevolvergame.com

We're putting the final tweaks on our trailer, and when that's done the store page will be live along with a final, confirmed release date.

We'll be releasing in October. This last phase of game development is often the most gruelling - constant pressure, stress and anxiety await us as we make sure everything about the game is "just so" for you folks.

So please bear with us just a little longer, and thanks for your patience!

Just going to show off a few things we've been working on in the last couple of months. First up is a peek at our adaptive difficulty, or RANK, system.

This ensures that no matter what your skill level, the game will adapt to suit you. Playing perfectly and getting a lot of x64s will crank up the rank level rather quickly, making bullet patterns faster and more furious - dying, on the other hand, will always decrease the rank level by at least 1.

Here's a peek at stage 4. The defining characteristic of this stage is a sheer density of enemies - players will have to be very proactive and aggressive to hold back the tide as they invade a complex, nightmarish base. You can also see a sneak peek of the second pilot character (and a familiar one at that...), as well as a defense special weapon. It takes a little bit of finesse to use, but allows you to turn some of these bullet patterns back on their owners!

Also - we've had to push the game's release back a little bit more, to Q1 2016. We want to ensure that we deliver the best game we can, up front, with a minimum of post-release patching. Sorry for any disappointment!

Read More
Description
Release date: October 2016
Blue Revolver is a fresh new manic shooter for PC, Mac and Linux. Inspired by the golden age of developers like CAVE and Raizing, we set out to create a challenging, interesting game for expert players - and to provide a set of special features to help new/casual players aspire to greatness.

Mae, bunny-eared technical genius, is pitted against the forces of “Blue Revolver” - a group seeking to confiscate or neutralize her volatile, dangerous creations by sending a few hundred volatile, dangerous enemies at her. Blasting off in a prototype ship armed with a fancy special weapon, she strikes back at the heart of their base!

Arcade-authentic, demanding "bullet hell" action!
5 stages of ferocity await you - inspired by the best and most fearsome the genre has to offer! For the true master players, a second loop is on offer - and a lot of the bosses will have a few new tricks up their sleeve...

Flourish system!
The scoring system for Blue Revolver is easy to understand - the trick is in figuring out where and how to apply it. Get an 8x chain, then destroy enemies with the special weapon for massive multipliers. Where will you build your chains? Will you save your ammo for tough enemies, or use it to max your score and chase an extra 1-up? Defense type weapon, Offense type or Finesse type? Can you figure out just the right way to crack a boss to get the BREAK bonuses?

Daily challenge!
Every day, a score target and a set of stages awaits you - with a special gameplay mode to spice things up. Boss rush! Special weapon only! Narrow vision mode! Time attack! Many more! How fast and how well can you crack the target?

Novice mode!
A novice mode is included for newcomers. The "autobomb" feature keeps you out of trouble, while the enemies go a little easier on you with simplified bullet patterns and less agressive behaviour.

Other features!
Replay support, player analysis, scoreboards, achievements, practice mode, extra modes, unlockable palette swaps, gallery mode and ship styles - we hope to make Blue Revolver one of the best and most comprehensive packages out there for both grizzled veterans and starry-eyed newcomers.

Thanks for your vote!
Popular Discussions View All (4)

Can you start a game from loop 2?
Cartography Dee

Diebuster Jan 27, 2016 @ 11:25am
this is neat, more indie games should go with arcade design instead of boring minimalism imo

BLUE REVOLVER has been Greenlit and is now listed in the Steam store. For the latest information, purchase options, and discussions for BLUE REVOLVER, please see it on the Steam Store or in the Steam Community.
Visit Store Page
For more details Visit Community Hub
For latest discussions
If you really, really want to, you can continue to the Greenlight page. Information on this page may be out of date, since all the action has moved to the areas noted above.