Greenlight > Games > Guerrilla Bandit's Workshop
Greenlight is being retired. For more information on how to submit games to steam, refer to this blog post.
This item has been removed from the community because it violates Steam Community & Content Guidelines. It is only visible to you. If you believe your item has been removed by mistake, please contact Steam Support.
This item is incompatible with Greenlight. Please see the instructions page for reasons why this item might not work within Greenlight.
Current visibility: Hidden
This item will only be visible to you, admins, and anyone marked as a creator.
Current visibility: Friends-only
This item will only be visible in searches to you, your friends, and admins.
ZombieRun
Description Discussions3 Announcements6 Comments98 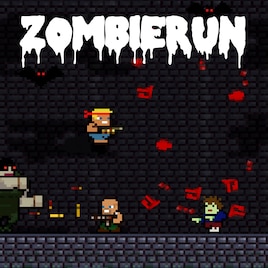 Guerrilla Bandit
Offline
See all 15 collections (some may be hidden)

View ZombieRun in the store

Store page
Recent Announcements View All (6)
ZombieRun is at 68% to the top 100 of Greenlight
February 23, 2015 - Guerrilla Bandit

Great news! ZombieRun is still moving forward in a steady pace. We are more than half way to the top. Keep em votes coming if you like ZombieRun!

Collecting healthy snacks in ZombieRun can give you powerful advantages agains the enemies. Here are the superpowers present in the game.

Doublejump will be your best friend in those hard to reach places. When activating the doublejump the player is able to jump two times in a row without touching the ground between the jumps. But be aware the doublejump is only active for 20 seconds so no time to wait start jumping right away.
DoubleJump can be activated with 10 carrots

So the gang of dead is closing in and your back is almost against the wall. What could stop them from getting you. Meet the freezer. You can freeze the herd of zombies and walk over them without getting a scratch.
Freeze can be activated with 20 carrots

If all else fails and you really need to set the score straight the SUPER is your man. When SUPER is activated you are invincible. The zombies burst to pieces when touching you and nothing can slow you down.
Super can be activated with 30 carrots

Oh noes so many zombies and there’s only one of you. How can you get past all the baddies if blasting away is not an option. Let’s meet Invisibility. Make yourself invisible and move safely among zombies without anyone bothering you.
Invisibility can be activated with 15 apples

Triggerfinger’s best friend. If you like blasting away all the zombies at once then activate bulletstorm. When bulletstorm is active you have unlimited supply of bullets so there’s no reason to lift the finger off the trigger. Just blast as long as there’s nothing to blast anymore.
BulletStorm can be activated with 30 apples

Read More
Description
ZombieRun is a retro platformer with the aim to bring sexy back to local multiplayer gaming. It's you, your friends and guns against all the living dead roaming around. If that's not enough there are also apples, carrots and superpowers in play.

Story
After a massive apocalyptic thunderstorm you find yourself in the middle of a forest graveyard with two zombies drooling over you. It seems that the thunder wasn’t the only thing that hit the world while you were out. It’s time to act fast, stay alive and get to the city for some answers. This is where it all begins it's you your fast reflexes and guns agains all the dead running around.

Features
The game features classical weapons, gang of living dead and superpowers. Yes, you have SUPERPOWERS. So get your cape on and start saving the world. ZombieRun has addictive single player mode and awesome local multiplayer games. Up to 4 players can play at the same time in either single screen co-op mode, where you have to work together as one or split screen competitive mode, where everyone's racing to the finish. And also there's the Battle mode where players can blast at each other with what they've got.

ZombieRun has controller support so dust of the old joypads and get cracking.

Game modes
So we’ve got intense solo mode where there’s only you against the world. Then we have co-op mode where up to 4 players can tackle the enemies as one team. And no we don’t leave anyone behind. Then there’s also the competitive mode that allows also up to 4 players to compete in split screen. Competitive mode is like a race to the finish. The one who’s first wins. Is it all already. No it’s not. I left my favorite to last. It’s the battle mode. This is straight up shoot everything that moves game mode. You go head to head with other players and only one can come out of the game as the winner. There are no limits in battle mode, everything is allowed, we actually encourage some elbow action when it seems that you might be losing.

Originally posted by John Bardinelli:
It's one part platformer, one part shooter, and one part reminder to eat your carrots and apples because they're sooooo good for you.

Originally posted by Vinny Parisi:
It’s not super often that I get an email that starts off asking me if I thought it was about time someone brought sexy back to local multiplayer gaming.

Guerrilla Bandit  [author] Feb 2, 2015 @ 6:02am
It seems I might have to add tanks to the game to win the tough crowd over. It's true that zombies in a platformer is nothing new these days. The main focus of my game is local co-op action. You can act as a team and back each other up in tough situations.

SaberViper Jan 31, 2015 @ 4:49pm
Wow...someone needs to fix the audio on the first video, I had my headphones off and damn near blew my ear drums out.

I'm not even looking at the game.
I'm sorry.
Enough of the zombies.
Use you imagination... burgening devs. You have one!

I have to save this comment, to post it every once and a while... greenlight's zombie problem is that bad.

ZombieRun has been Greenlit and is now listed in the Steam store. For the latest information, purchase options, and discussions for ZombieRun, please see it on the Steam Store or in the Steam Community.
Visit Store Page
For more details Visit Community Hub
For latest discussions
If you really, really want to, you can continue to the Greenlight page. Information on this page may be out of date, since all the action has moved to the areas noted above.