Greenlight > Games > drazavi's Workshop
Greenlight is being retired. For more information on how to submit games to steam, refer to this blog post.
This item has been removed from the community because it violates Steam Community & Content Guidelines. It is only visible to you. If you believe your item has been removed by mistake, please contact Steam Support.
This item is incompatible with Greenlight. Please see the instructions page for reasons why this item might not work within Greenlight.
Current visibility: Hidden
This item will only be visible to you, admins, and anyone marked as a creator.
Current visibility: Friends-only
This item will only be visible in searches to you, your friends, and admins.
Vidar
Description Discussions0 Announcements7 Comments98 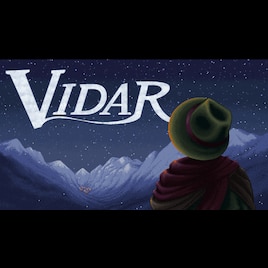 drazavi
Online
See all 5 collections (some may be hidden)
Kickstarter

View Vidar in the store

The Vidar store page is live on Steam, so this will be the last post over here on the Greenlight page. In theory, Steam will alert you to this fact if you're visiting this page, but if not, just search for Vidar in the search bar above and come check our new home (with a MUCH better video!)

Read More
Vidar Has Been Nominated for the '16 Bit Awards! (And Other Things)
December 7, 2016 - drazavi

Our friends over at Playcrafting have nominated Vidar for "Best PC/Console Game" of 2016!

This will definitely be an incredible event taking place on Thursday December 15, 2016. If you're in the New York area, we'd love to see you there. Tickets are limited so get them while you still can![www.eventbrite.com]

Here's a description taken from their Eventbrite page:

“Playcrafting is proud to present The '16 Bit Awards, a celebration of game developers!

In partnership with Parsons, the New School of Design, this event will include the award ceremony, including musical performances, special guests and surprises. Refreshments and drinks will be served before and after the event while a number of games will be playable onsite too. Attendees will also receive free download codes for participating nominated games."

We also have an official Early Access launch date - January 31! Mark your calendar, set several alarms, and keep track of our progress at the website and devblog.[www.vidarthegame.com]

"A brilliant and unique experience . . . Its complexity and mind-boggling depth can be seen even in a short 15-20 minute demo of the game." - Entertainment Buddha

"It hurts so good each time you play" - Indie Game Riot

"If there was one game I could ask that you vote yes on Greenlight for, this would be it." - TechRaptor

VIDAR IS DYING. The former capital of a kingdom is now reduced to a shell of a town. A city that once saw wealth and war sees now only storms, famine, sickness and death. Now a new threat has emerged, a terrible beast with an appetite for those who still live. So long as this Beast is left to feast on the remaining villagers, Vidar's days are numbered.

ABOUT VIDAR
Vidar is an RPG Puzzler focused on random story-telling and random puzzles. You play as the Stranger, a character who was lost in a snowstorm and made it into town at a time when no one can leave. Now trapped, the Stranger fights alongside the remaining townsfolk to stop the Beast before it kills every last person. Each night, another citizen is killed - you'll have only 24 days before Vidar is gone.

RANDOM STORY-TELLING
Each resident has their own stories to tell, their own quests to give the player, and their own relationships with each other. As their neighbors, lovers, friends, and family die, each is deeply affected by the loss - and their story arcs diverge accordingly. As the game progresses, the stories of the living change in response not just to what the player has done, but to who has died as well. Because the order of deaths in Vidar is random each playthrough, every game is a new story. In one playthrough, the priest may die the first night; in the next, he'll invite the remaining townsfolk to barricade themselves in the Church as a last effort to survive; in the next, he'll grieve the loss of a close friend and give up the cloth for good.

PUZZLE-DRIVEN EXPLORATION
To stop the Beast you will explore its den, filled with vast and varied environments. From frigid layers of ice to dusty boulders, each layer of this dungeon reveals more about Vidar's past as a once-thriving capital. You'll hear stories of a Boy King who went mad and abdicated the throne, or see ghosts trapped in reenacting the same war over and over until the end of time. You'll meet a lady-of-the-lake who has spent a millennium trying (and failing) to cultivate a religion around her persona. And of course, your mind will be put to the test in a series of challenging environmental puzzles.

The cave blends nostalgic dungeon-exploration mechanics (like frictionless ice, mirrors which reflect light, adjustable water levels, and more) with new twists. Your path through the dungeon is chosen at random, the rooms you explore are chosen at random, and each puzzle in each room is chosen at random from a bank of several hundred. If you want to come back and see a brand new story unfold, you won't be stuck playing puzzles you've already solved.
< >
98 Comments

drazavi  [author] Mar 5, 2015 @ 6:54am
Thank you so much, everyone, for your help and encouragement! I'll make sure to post occasional updates here, but the best way to keep in touch is on the dev blog. Come say hi at ironshoe.wordpress.com!

Leboism Feb 28, 2015 @ 9:32pm
Played it at Magfest. Fell in love with it instantly. Congrats on meeting your kickstarter goals!

mrbaddaddydragon Feb 26, 2015 @ 8:34pm
Love the demo - congrats on reaching your kickstarter goals, I am excited to see more from this team!

coiledrose Feb 26, 2015 @ 8:19pm
Voted up! Dean Razavi is an incredible developer, with a lot of heart. One of the best interviews I've ever done. Becca Bair is a rare talent, who deserves every penny the Kickstarter has raised, and now with the Greenlight, Vidar can become more accessible and reach an even wider audience! Congrats Vidar, let's give you the greenlight!

Vidar has been Greenlit and is now listed in the Steam store. For the latest information, purchase options, and discussions for Vidar, please see it on the Steam Store or in the Steam Community.
Visit Store Page
For more details Visit Community Hub
For latest discussions
If you really, really want to, you can continue to the Greenlight page. Information on this page may be out of date, since all the action has moved to the areas noted above.