Greenlight > Concepts > feiss's Workshop
Greenlight is being retired. For more information on how to submit games to steam, refer to this blog post.
This item has been removed from the community because it violates Steam Community & Content Guidelines. It is only visible to you. If you believe your item has been removed by mistake, please contact Steam Support.
This item is incompatible with Greenlight. Please see the instructions page for reasons why this item might not work within Greenlight.
Current visibility: Hidden
This item will only be visible to you, admins, and anyone marked as a creator.
Current visibility: Friends-only
This item will only be visible in searches to you, your friends, and admins.
Orion [working title]
Description Discussions1 Announcements1 Comments22 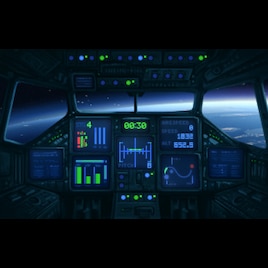 feiss
Offline
See all 4 collections (some may be hidden)
Recent Announcements View All (1)
Delayed :/
February 16, 2016 - feiss

I've just become a father, so my spare time got reduced to the minimum. Once my time returns, I should continue Orion!

Read More
Description
Orion is the prototype of a Spacecraft simulator in which you, in the role of the pilot and the captain, have to do all kind of tasks in order to complete the mission. The game puts strong emphasis in creating a special atmosphere and an emotional and engaging experience. Think of this game as "Tie Fighter meets NASA".

I made Orion for Ludum Dare 31 under the theme "Entire Game on One Screen". Please bear in mind that the current prototype has a very reduced gameplay and duration, it was done in 2 days .

Since it was very well received by players and media, I would like to know -with the help of the Steam community- whether it has potential to become a full game or not, if it really has an audience... and I'd love to receive feedback, features people would like, etc.

PLAY THE PROTOTYPE AT feiss.be

baseLeene Apr 3, 2016 @ 6:27pm
Played the freebie on Gamejolt and I really want to see the finished product. Good luck :)

Roy Batty Dec 25, 2014 @ 7:07pm
Has great potential. The only reason I thumbs down is that you need to be able to then have a set of mission objectives to build your skill level. So let's say landing at Edwwards or launch from the pad. If that was added in, this would be very cool.