Greenlight > Concepts > Planet Forge Games's Workshop
Greenlight is being retired. For more information on how to submit games to steam, refer to this blog post.
This item has been removed from the community because it violates Steam Community & Content Guidelines. It is only visible to you. If you believe your item has been removed by mistake, please contact Steam Support.
This item is incompatible with Greenlight. Please see the instructions page for reasons why this item might not work within Greenlight.
Current visibility: Hidden
This item will only be visible to you, admins, and anyone marked as a creator.
Current visibility: Friends-only
This item will only be visible in searches to you, your friends, and admins.
Dragon's Hoard: Domination
Description Discussions0 Announcements1 Comments8 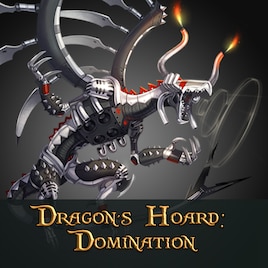 Download Alpha version a 1.02[s3-us-west-2.amazonaws.com]
Enjoy, share, give us feedback and support the development effort - your feedback builds the game! No, really!

Controls
World
W,A,S,D - Directional keys - double tap to dash,
S - Over your Lair will enter it,
Left/Right Click - Use the Ability from the Left/Right slot,
Scroll - Swap loadouts,
Hover - Displays overly explanatory help boxes,
Click - On the World Eater Eye (middle of the UI) will drop down the Den Unit display (shows when minions get spawned).

Lair
W - Will exit the Lair,
Scroll Down - Zooms out,
Click - Focuses on selected room.
Click & hold on the orb in the World Crusher room to destroy the world and choose a new destination (at a Domination Energy penalty)

What You Can Do

Version Changes
Planned Changes
Read More
Description
THE GAME IN A NUTSHELL
In this side-scrolling Action RPG, you take the role of a World Eater which travels through The Void smashing and burrowing into unsuspecting worlds. There you can:
• take control of a summoned Dragon which can be equipped and customized for maximum mayhem and destruction,
• command minions to assassinate, pillage, spy and terraform,
• defend against Settlement Armies, Thieves, Heroes and Slayers,
• fight other dragons for supremacy and new abilities,
• forge armors and abilities,
• obliterate entire worlds on a whim,
• and more....

Experience a dynamic world where Settlements react to Dragon presence by:
• boosting each-other via Loot Caravans,
• scouting around for Loot that may have been dropped by Dragons,
• summoning Armies and Heroes to steal from the Dragon's Lair,
• summoning Dragon Slayers to hunt down Dragons.

Experience the randomness of a world where biomes and their settlements, settlement armies and their abilities, events and... pretty much everything related to the world will be randomized on every new game.

This game lets you mod just about anything from how everything looks to what everything uses to attack you with.
• Steampunk Dragons? - no problem!
• Units firing sheep as projectiles ? – done!
• Biomes made of cake? - already there!

In this epic domination contest will you survive long enough to become Ruler of The Void?

THE WORLD EATERS
This universe is populated by countless worlds teeming with life and a seemingly infinite biome variety.

In what seems like an all you can eat buffet, space faring entities known only as World Eaters travel from planet to planet in order to devour resources and life force. They turn the life force into Domination Energy which they use to summon Dragons as their heralds of doom.

Although capable of unimaginable destruction, they’re vulnerable to the insects that inhabit the worlds. The Settlers will rush to a World Eater’s core to steal its life force which also happens to be a mountain of precious stones and metals. To protect themselves, the World Eaters collect Dragon Cores which they use to summon Dragons of different shapes, sizes and types.

THE DRAGONS
Their mere presence terraforms the land to a draconic landscape disrupting a region’s income and their Call can command armies of minions to destroy or infiltrate settlements, overrun or assassinate enemies, build defenses, recover dropped treasures or permanently terraform regions.

Dragons have access to various facilities that allow them to dominate worlds including the Armor Forge, Ability Forge and Domination Engine.

World Eaters can gain new Dragon Cores by defeating other World Eaters. Each Dragon having unique traits and visuals.

THE SETTLERS
The local settlers are none too happy about their Dragon neighbors. In preparation for the encounter, they will start gathering resources, help each-other grow by sending Loot Caravans from one-another and will send Thieves to loot the nearby Dragon Lairs.

Once their wealth allows it, they’ll be able to summon Hero Parties, Armies or even Dragon Slayers. The Thieves Guild will make its services available for the Settlers allowing them to send Thieves to stealthily steal from the Dragon’s Lair.

THE CONFLICT
Occasionally players may find that other Dragons inhabit the same planet and they will have to use all their strength to defeat these foes; the prize being new abilities which they can upgrade to deal more damage and to have new effects added.

Specialized Dragon Slayers will relentlessly hunt down Dragons using exotic abilities and their presence will boost the morale of all other enemies.

THE OTHERS
Occasional Mysterious Traders will appear offering resources, abilities and a safe haven for Dragons.

Settlements will send Caravans to boost each-other’s economy or to save their fortune in case they’re facing certain doom.

Random Encounters will have Dragons engage in various challenge events.

THE END?
World Eaters can choose to change planets at any time destroying the current one in the process. Each new planetary impact will result in the seamless procedural generation of a whole world.

THE CHALLENGES
Each time World Eaters land on a planet, a random list of Dynamic Challenges will be given, which Dragons have to go out of their way to complete. Challenges will offer various rewards which range from Domination Energy to Armor Set pieces and blueprints
< >
8 Comments

Fate (-{SoH}-) Dec 13, 2015 @ 4:29pm
Suggestions:
Remove the chew toy sound,
Add ingame instructions.
And post some news or something as you havent touched this game in over a year.

Planet Forge Games  [author] Nov 3, 2014 @ 1:41pm
We will post an open beta when it reaches that stage - until then, the only ones allowed to play the beta and early stages are the Crowdfunding Backers