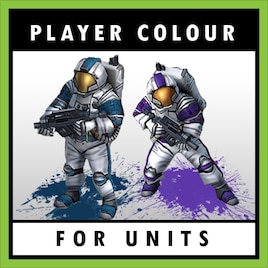 SaintDaveUK
Offline
See all 226 collections (some may be hidden)

This item has been added to your Subscriptions. Some games will require you to relaunch them before the item will be downloaded.
Description
It annoyed me that every unit in the game has the same red colouring, so I made this mod which applies a sponsor's national color onto its units, so it is easier to tell which civilization owns which unit.

Sorry to say that I have abandoned this mod and won't be updating it for Rising Tide or any future expansion.

Features
The following units (for all civs) have been given dynamic coloring;
Future
The ultimate goal of this mod is to eventually give dynamic colouring to all units in the game. So far this is proving pretty difficult to test with the later units, as it is not easy to spawn them to test.

Zack Nov 28, 2020 @ 8:39am
This isn't ever getting updated, as the description says. The author posted it, updated it a few days later and never touched it again. Clearly, they don't intend to come back to it.

Jackmino May 2, 2019 @ 1:55pm
An RT update would need to add colours for the new units, and new colours for the new factions. Do you use the In Game Editor to spawn in units, or do you have to play through the whole game to unlock all of them, just to test

"Sorry to say that I have abandoned this mod and won't be updating it for Rising Tide or any future expansion."