Greenlight > Games > Sebastian's Workshop
Greenlight is being retired. For more information on how to submit games to steam, refer to this blog post.
This item has been removed from the community because it violates Steam Community & Content Guidelines. It is only visible to you. If you believe your item has been removed by mistake, please contact Steam Support.
This item is incompatible with Greenlight. Please see the instructions page for reasons why this item might not work within Greenlight.
Current visibility: Hidden
This item will only be visible to you, admins, and anyone marked as a creator.
Current visibility: Friends-only
This item will only be visible in searches to you, your friends, and admins.
Damnation City of Death
Description Discussions0 Announcements9 Comments277 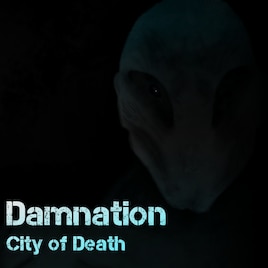 Junkerdale
Offline
See all 23 collections (some may be hidden)

View Damnation City of Death in the store

Damnation City of Death is going into Steam Early Access on 3rd of March!
a Large launch patch coming as well!

Damnation City of Death has been successfully Greenlit and is coming soon to Steam!
a Huge thanks for all who voted for the game!

Originally posted by William Goldman, The Princess Bride:
“We’ll never survive!”
“Nonsense. You’re only saying that because no one ever has.”

Damnation - City of Death is a survival game set in a procedurally generated city filled with content. Search vital items for your survival and deal with a load of zombies & monsters at the same time. But you don't have to do all of this alone! Join forces with other survivors and start to secure your surroundings. You can find everything you need to survive from the city. You just have to have the willpower to make the climb and start to gather your supplies.
Surviving is a choice you make.

Game modes
Survival:
Survive in the randomly generated city against monsters and other players. Find & create shelter and fight against cold, hunger and thirst.

Nuke:
A Nuke has been set in the city to destroy it. The infection threat has been succesfully contained and a strike is no longer required. The bomb location is unknown in the city as the team guarding it disappeared and the bombs location transmitter turned off. The civilian casualties are enourmous if it goes off. You and your team have to disarm the bomb before it explodes and get in time to the rescue chopper.

Alien Threat:
a Giant monster roams in the city. Military has ordered a special team to neutralize the threat before it gets out of the city and releases all the horrors that have been blocked away from the rest of the world.

Rescue:
The President has approved a plan to exterminate all living things from the city. Your team has been given the final chance to rescue all remaining civilians from the city before airstrike hits and destroys every single living thing that walks in the city.

About
The game is being developed by Antiproto. We are a small indie-studio from Finland.

Early access version is already available on our website and in Desura and will hopefully be soon in Steam. The Full game will be released in early 2015. The game is updated frequently and we are putting a great effort in the game.

Damnation City of Death has been Greenlit and is now listed in the Steam store. For the latest information, purchase options, and discussions for Damnation City of Death, please see it on the Steam Store or in the Steam Community.
Visit Store Page
For more details Visit Community Hub
For latest discussions
If you really, really want to, you can continue to the Greenlight page. Information on this page may be out of date, since all the action has moved to the areas noted above.