Greenlight > Games > Tio Atum's Workshop
Greenlight is being retired. For more information on how to submit games to steam, refer to this blog post.
This item has been removed from the community because it violates Steam Community & Content Guidelines. It is only visible to you. If you believe your item has been removed by mistake, please contact Steam Support.
This item is incompatible with Greenlight. Please see the instructions page for reasons why this item might not work within Greenlight.
Current visibility: Hidden
This item will only be visible to you, admins, and anyone marked as a creator.
Current visibility: Friends-only
This item will only be visible in searches to you, your friends, and admins.
Greedy Guns
Description Discussions1 Announcements15 Comments152 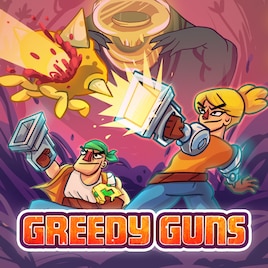 View Greedy Guns in the store

Store page
Recent Announcements View All (15)
WE ARE BACK! New jumps and kickstarter updates
March 25, 2017 - atum_ramirez
Good Weekend everyone!
We are ramping up testing here @ Tio Atum. A lot of juicy feedback and the occasional rage quit are helping us make Greedy Guns better with each pass. So let me show you all what we've been up to!

ALSO - for more updates got to either ou BLOG[www.tioatum.com] Kickstarter Page - Facebook[www.facebook.com]

Jump you fools!
We keep having people say there's something wrong with the way our heroes jump. They can't really put their fingers on it, but something is off.

We can see it when they miss a jump they were sure they were going to land. We came to the conclusion that it was a mix of a poor animation (didn't quite show where the feet of the character were while airborn) and somewhat randomly placed platforms, that seemed possible but were a bit tricky to gauge the distance and adequate jump needed to clear it.

What can we do to fix it? Well, change the animation and make sure the platforms all fall into a few standards of distance and height. That means going throw all 130 something rooms or levels and fixing that (ouch!). But we are on it!

We already did some tweaks to the animations. Here's the classic before and after.

Now for the new one!

Can you tell the difference? Let's us know what you think in the comments

Our characters now raise the legs, parallel feet, so you can better gauge how high you can actually go. It feels much better but the proof is in the pudding. We'll have to wait for the next round of tests for that!

The latest test session
Mid this week we had our good friend and game designer Edgar Jesus (@edgarajesus) to come and test Greedy Guns for a couple of hours. If you are on the twitterverse just follow that man cause we can't thank him enough for all his feedback and help.

Tio Atum at Rezzed!
I'll be parading my Greedy Guns gear at Rezzed in London next week. If you don't know Rezzed it a cool gaming event full of indies and great people that love games.

During the campaign, we got three Stretch Goals!!

New Weapon
Unlock a powerful new weapon! What will it be? Check our updates and find out!


Not just your standard set of achievements! Can you finish the game with one life? How about only killing the least amount of enemies possible? Can you defeat all the secret bosses?


Play the game all over again. This time harder, with more secrets and with all the weapons unlocked!

DID YOU MISSED OUR CAMPAIGN? WE GOT YOUR BACK!!
If you missed our campaign, you can still back us trough PayPal! Just go to the Greedy Guns site [greedyguns.com] and choose your reward!!

What is it?
Greedy Guns is a colorful, joyful, platformer that sprinkles elements of exploration. Prepare yourself for tears flowing down your face, while being crushed by its arcady dual stick shooter apocalypse.

Inspired by the shooters of old like Gunstar Heroes, Metal Slug and Contra, Greedy Guns adds to it exploration elements and upgradable abilities.

Can a ubiquitous corporation ever be evil? Of course not, profit is beyond ethics! That’s why HOLO CORP isn’t shy of sending mercenaries to explore and preventively attack alien worlds. In return they get artifacts and DNA that they can use for much needed research. The Greedy Guns team is happy to work for HOLO CORP as long as they pay well. And do they ever. Too bad they also sell them their guns.


Stay tuned to get the latest updates.
Popular Discussions View All (1)

Irokusito Jan 7, 2016 @ 12:15pm
Absolutely amazing game! I played it at ComicCon Portugal and it was AWESOME.
Just cant wait to play it!

Greedy Guns has been Greenlit and is now listed in the Steam store. For the latest information, purchase options, and discussions for Greedy Guns, please see it on the Steam Store or in the Steam Community.
Visit Store Page
For more details Visit Community Hub
For latest discussions
If you really, really want to, you can continue to the Greenlight page. Information on this page may be out of date, since all the action has moved to the areas noted above.