Greenlight > Games > Digi_Ent's Workshop
Greenlight is being retired. For more information on how to submit games to steam, refer to this blog post.
This item has been removed from the community because it violates Steam Community & Content Guidelines. It is only visible to you. If you believe your item has been removed by mistake, please contact Steam Support.
This item is incompatible with Greenlight. Please see the instructions page for reasons why this item might not work within Greenlight.
Current visibility: Hidden
This item will only be visible to you, admins, and anyone marked as a creator.
Current visibility: Friends-only
This item will only be visible in searches to you, your friends, and admins.
Apollo4x
Description Discussions1 Announcements14 Comments102 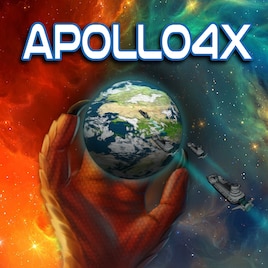 Digi_Ent
Offline
See all 15 collections (some may be hidden)

View Apollo4x in the store

If you have yet to notice we're available on the Steam Store, check us out now!

Check us out - HERE

Here's a statistic - 7900 visitors to our Greenlight campaign. 96% of that happened on the first 3 days of the game being on Greenlight. No matter how much press we get, nothing can have the impact that getting the game to the top of the Greenlight page will. The sacrifice is that we have to reset the yes-vote counter to zero again. We've long had an internal debate about if it's worth it to do that or not.

We've arrived at "yes, it is." Here's why... The game is about 2 weeks from being done, sans minor bug fixing and ongoing balancing that we can only do once we have sufficient numbers of people playing it. As of now, however, we have customers playing it right now and things are looking good.

So, that's as "done" as a game can get. We hate Early Access. We hate crowdfunding. We didn't do any crowdfunding, you may have noticed. It's a curse on the market and turning it into a used car lot. What we DID do is build a game we like to play.

So, now that we have a game that is able to stand on its own merit, that's a LOT more credible than a Greenlight of an early alpha like we had in Sept. It's our sincere hope that if we reboot the Greenlight and show the world what the game is like TODAY, then that plus a campaign to get Youtubers and regular folks like yourselves to talk about it and bring people here will hopefully be sufficient to power it through this dank swampy mire that Greenlight has become.

Here's something you probably haven't seen before... DON'T vote for this game on Greenlight right now. Wait until we re-launch it, and then come back and vote, because we don't want you to waste your time doing it now just to have the counter reset in a couple weeks. Then again, go ahead and vote it up if you want, and maybe we'll get Greenlit. Who knows? We would like to at least.

One final note: THANK YOU VALVE for finally stating that the bribery of free games in return for astroturfing yes votes in here is unethical. We hope they go after the guys who bundle un-greenlit games next. They have betrayed the spirit of gaming.

Apollo4x: Interstellar Trade Imperialism
Apollo4x is a turn-based science-fiction business, trade, and governance simulation. You colonize three starting worlds, place industries on them, and ship exports between worlds for profit. Expand to new planets to increase your trade routes, and spend the approval and political clout on the homeworld to ally with nations and unlock their unique bonus powers. Raise an army to defend your colonies from the barbaric alien hordes in a card-based combat system quite unlike any other. The game can be won via expansion, political influence, or elimination of all enemy worlds.

There is no "set it and forget it" business here. Each turn, the available goods on the market can change multiple times requiring you to reconsider your trade routes. The market is dynamic, and reacts to your business and political manipulations. Apollo4X is built to be easily accessible to the casual crowd, and you can play through a game quickly on easy difficulties -- but for the experienced player we have given ample tools to tweak the difficulty to your personal tastes, for a challenging 4X business puzzle that will always generate a new and interesting scenario. Play on a flat 2D galaxy map, or switch the map into a 3D cloud of planets.

The Colonists Are Restless!

Barbarians At The Gate!
Popular Discussions View All (1)

Digi_Ent  [author] Mar 30, 2015 @ 6:58am
@Bernstein.Harvey. Yep. Just show proof of purchase with our contact email and we will hand out Steam keys on an informal basis. After release.

dustoff Mar 24, 2015 @ 11:46am
Just occured to me that a Dev Paradox could possibly be a win-win with exposure to wide startegy audience.

Obviously not a simple decision, and good luck with the release!!!

Seaswolf Mar 22, 2015 @ 10:51am
Wow... I loved. It reminds me the old game that you colonize planets and develop it. What surprised me is the way of defending and attacking. Like Magic de Gathering.

We will also be offering a release version soon...
< >

Apollo4x has been Greenlit and is now listed in the Steam store. For the latest information, purchase options, and discussions for Apollo4x, please see it on the Steam Store or in the Steam Community.
Visit Store Page
For more details Visit Community Hub
For latest discussions
If you really, really want to, you can continue to the Greenlight page. Information on this page may be out of date, since all the action has moved to the areas noted above.