Greenlight > Concepts > Ice-Pick Lodge's Workshop
Greenlight is being retired. For more information on how to submit games to steam, refer to this blog post.
This item has been removed from the community because it violates Steam Community & Content Guidelines. It is only visible to you. If you believe your item has been removed by mistake, please contact Steam Support.
This item is incompatible with Greenlight. Please see the instructions page for reasons why this item might not work within Greenlight.
Current visibility: Hidden
This item will only be visible to you, admins, and anyone marked as a creator.
Current visibility: Friends-only
This item will only be visible in searches to you, your friends, and admins.
Pathologic (Мор.Утопия)
Description Discussions0 Announcements6 Comments272 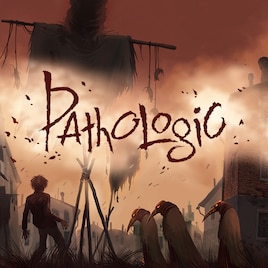 Xsnusmumrik
Offline
See all 56 collections (some may be hidden)
Kickstarter
Recent Announcements View All (6)
Pathologic on Steam
August 23, 2016 - Demonocrat

http://store.steampowered.com/app/505230/
The not-yet-real existence of the new Pathologic has just found additional tangibility: the game has a Steam page now. If you want to keep an eye on the game’s progress and news, there’s no better way of doing so than following said page.

And you may need to do the eye-keeping for a bit longer than we were hoping. The game’s release will be postponed until Autumn, 2017. Why? Basically, Pathologic has grown in scope and ambitiousness since its inception, so it demands additional time and man-hours now. Find out more here[pathologic-game.com].

But hey, at least it has a Steam page.

http://store.steampowered.com/app/384110
Pathologic Classic HD arrives on Steam, GOG, and Humble Store on October, 29; just in time to revisit the game while the autumn is still golden.

If you're a Kickstarter backer eligible for a copy of Pathologic Classic HD (OLD AND NEW tier or higher), you can already redeem the code on the Backer Portal, although we encourage you to double-check your reward choices, since taking the code will make downgrading the tier impossible.
Find more facts, figures, details, and Caps Lock in our recent update!
https://www.kickstarter.com/projects/1535515364/pathologic/posts/1390639

12 days in a town devoured by plague. It's an enemy you can't kill. It's a game where you can’t save everyone.
It’s a game that’s being Kickstarted right now!

Premise
A plague breaks out in a remote steppe town full of weird local traditions. Three healers try to fight it: a scientist from the Capital, the son of a local shaman, and a half-crazed girl. Each of them has their own idea of how the terrible disease came to be, and what is real magic to one of them becomes backwards superstitions to another. Taking on the role of any of these doctors, you’ll try to overcome the invisible evil while doing your best not to succumb to the disease, to bandits, hunger, and fatigue; scavenging and bartering for pills, bread, and milk. But it’s hard to survive in Pathologic—the remake of a ruthless and critically acclaimed Russian survival adventure game from 2005!

DIGI Oct 25, 2016 @ 5:13pm
sounds promising but I'm worried its going to be another 'the void'
The void sucked, bad. I'm sorry but there is a line between entertainment and torture. and the void crossed that line with its tedious farming and brutal logic.

why should I back this project with that game in your past and this one just as simular in basic design?