Greenlight > Games > crazymonkeystudios's Workshop
Greenlight is being retired. For more information on how to submit games to steam, refer to this blog post.
This item has been removed from the community because it violates Steam Community & Content Guidelines. It is only visible to you. If you believe your item has been removed by mistake, please contact Steam Support.
This item is incompatible with Greenlight. Please see the instructions page for reasons why this item might not work within Greenlight.
Current visibility: Hidden
This item will only be visible to you, admins, and anyone marked as a creator.
Current visibility: Friends-only
This item will only be visible in searches to you, your friends, and admins.
Guns, Gore & Cannoli
Description Discussions12 Announcements5 Comments579

crazymonkeystudios
Offline
See all 84 collections (some may be hidden) 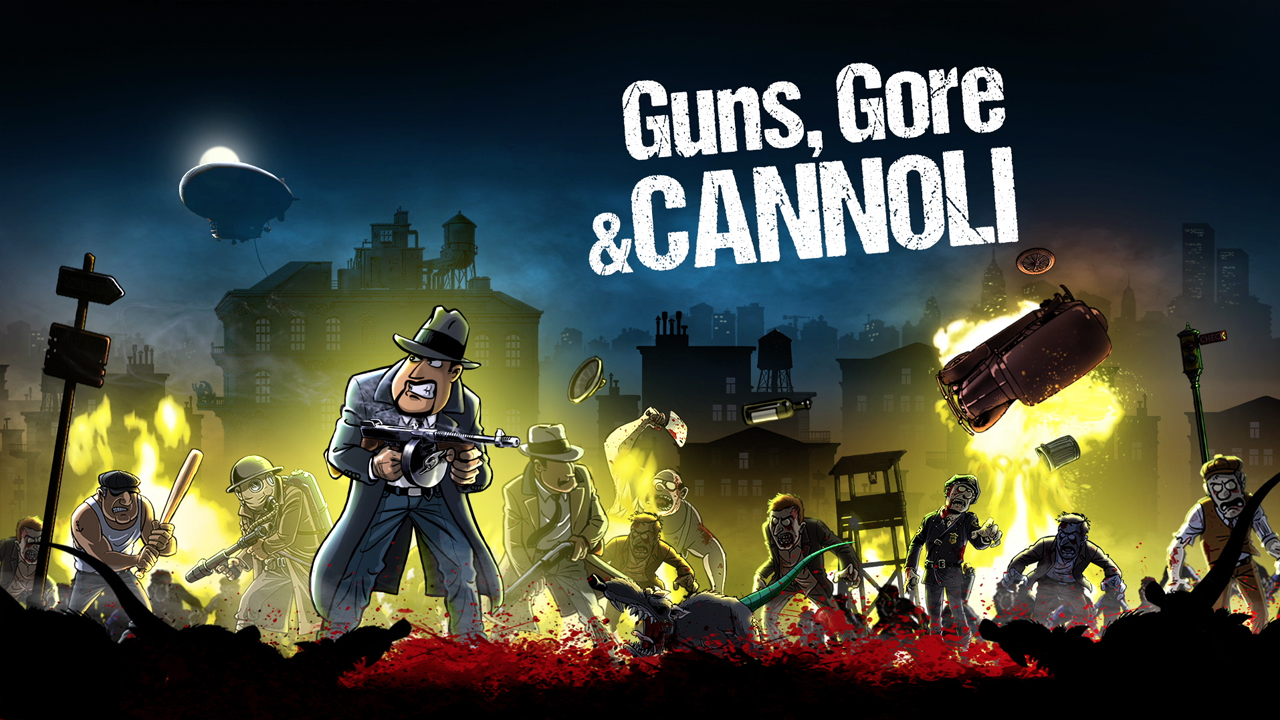 After a year of hard work we finally released this baby into the wide world! Action, humor, mobsters, zombies, badass flame-throwing soldiers, mutant rats and a lot more.

We also added cool trading cards and beautiful backgrounds for the collectors.

Check out our official Steam page here and buy the game now!... and most of all, enjoy this spicy-meat-a-ball of a game!

Thanks all for the support, pals!
the Dev-team

Hi Guys,
Check out our official Steam page: here
We are counting down for release, only 3 weeks left...
Stay tuned!

Read More
Description
Release date: Early 2015
Imagine The Godfather playing Metal Slug on the Night of the Living Dead.
Guns, Gore & Cannoli is an over-the-top, comical, fast-paced action game with hand drawn graphics set in the Roaring Twenties.
Meet Vinnie Cannoli, a hard-boiled gangster who comes to Thugtown, to find a goodfella who’s gone missing.
Nothing that can't be solved with a kind word with the local gangsters though. Especially when you're packing a Tommy gun and a double barrel shotgun to be a little more persuasive. There's only one thing that's holding him back… Every friggin' lowlife in the city turned into a flesh-eating maniac.
This is survival horror, wiseguy style... Capiche?

Key Features:
Action-Packed Gameplay
Prepare yourself for a non-stop, action-packed, completely over-the-top, platform game where you have to fight, shoot, blast and kick your way through a deeply engrossing story. Not only will you have to take on the undead, but also rivalling gangsters and government officials.

Epic Gangster Story
Beneath the city overrun by zombies, there's a dark story of conspiracy and betrayal. Unravel the sneaky mafia ways and government conspiracy while you try to look for your lost pal and for answers about the zombie-outbreak.

Immersive World and Period
Despite Prohibition and the imminent Depression, people are ready to drink themselves to (un)dead. Every inch of the game is like a picture straight from the Prohibition era. The cars, the furniture, the Speakeasy clubs, the music and the weaponry reflect the turbulent days of the roaring twenties.

Co-op mode
Partner up with friends and unravel the mystery together.

Current Status
Guns, Gore & Cannoli is currently in development and set to launch Early 2015 on PC, Mac, Xbox One, PS4 and Wii U.

Guns, Gore & Cannoli has been Greenlit and is now listed in the Steam store. For the latest information, purchase options, and discussions for Guns, Gore & Cannoli, please see it on the Steam Store or in the Steam Community.
Visit Store Page
For more details Visit Community Hub
For latest discussions
If you really, really want to, you can continue to the Greenlight page. Information on this page may be out of date, since all the action has moved to the areas noted above.