Greenlight > Games > scott_harber's Workshop
Greenlight is being retired. For more information on how to submit games to steam, refer to this blog post.
This item has been removed from the community because it violates Steam Community & Content Guidelines. It is only visible to you. If you believe your item has been removed by mistake, please contact Steam Support.
This item is incompatible with Greenlight. Please see the instructions page for reasons why this item might not work within Greenlight.
Current visibility: Hidden
This item will only be visible to you, admins, and anyone marked as a creator.
Current visibility: Friends-only
This item will only be visible in searches to you, your friends, and admins.
The Ingenious Machine: New and Improved Edition
Description Discussions0 Announcements1 Comments176 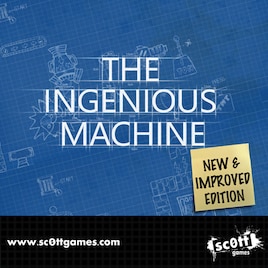 scott_harber
Offline
See all 18 collections (some may be hidden)

View The Ingenious Machine: New and Improved Edition in the store

After a successful Greenlight campaign and a run on three separate bundles, The Ingenious Machine is now available for PC and MacOS via Steam.

As an added bonus, the Steam version features exclusive new content, designed to help prevent the game from becoming too repetitive. It includes an entirely new soundtrack, with a modified theme tune, and three in-game background tunes. Also, the characteristic blueprint-style background changes as you play, becoming increasingly distressed and grimy with every failed attempt at completing each level.

Read More
Description
Release date: August 2014
About
The Ingenious Machine is a single-player, physics-driven puzzle game for Windows and Mac.

The player is presented with a series of light bulbs, and occasionally some obstacles. The goal of each level is to switch on the light bulbs by creating an elaborate machine out of a pre-defined array of gadgets. The gadgets range from sensible items (such as fans, magnets and conveyor belts) to more extreme items (such as flame-throwers, dynamite and lasers).

For each level, points are awarded for creativity - The more elaborate your machine, the higher your score. However, your score is halved with each failed attempt at constructing a working machine, making this game the ultimate trade-off between creativity and practicality.

In terms of design, there are some clear parallels between this and similar titles such as The Incredible Machine, Amazing Alex, Crazy Machines, et al. However, The Ingenious Machine stands out by offering a more free-form approach to gameplay. For example, while each level is presented in ascending order of difficulty, they can all be solved in multiple ways. The player has access to all of the gadgets at all times, and they are not limited by how many they can place (there's something strangely satisfying about filling the entire screen with dynamite!). The Ingenious Machine is less about solving the puzzle, and more about solving the puzzle in the most stylish way possible.

The Ingenious Machine was originally released for smartphones. It was well-received on those platforms, and was previously a featured app on the Windows Phone store. However, this "New and Improved Edition" is far from a lazy mobile port. It has been rebuilt to offer more options to the PC/Mac audience. There are double the number of levels of the mobile edition, with improved music, re-authored graphics, and four exclusive new gadget types:


This game is all about user-generated content and creative problem-solving. And also dynamite. ;)

Critic Quotes
"How much do you like Rube Goldberg machines? If it's quite a lot, then you'll want to check out a new physics-based puzzler called The Ingenious Machine." - PocketGamer.com

The Ingenious Machine: New and Improved Edition has been Greenlit and is now listed in the Steam store. For the latest information, purchase options, and discussions for The Ingenious Machine: New and Improved Edition, please see it on the Steam Store or in the Steam Community.
Visit Store Page
For more details Visit Community Hub
For latest discussions
If you really, really want to, you can continue to the Greenlight page. Information on this page may be out of date, since all the action has moved to the areas noted above.