Greenlight > Games > Zarkonnen's Workshop
Greenlight is being retired. For more information on how to submit games to steam, refer to this blog post.
This item has been removed from the community because it violates Steam Community & Content Guidelines. It is only visible to you. If you believe your item has been removed by mistake, please contact Steam Support.
This item is incompatible with Greenlight. Please see the instructions page for reasons why this item might not work within Greenlight.
Current visibility: Hidden
This item will only be visible to you, admins, and anyone marked as a creator.
Current visibility: Friends-only
This item will only be visible in searches to you, your friends, and admins.
Airships: Conquer the Skies
Description Discussions2 Announcements21 Comments289 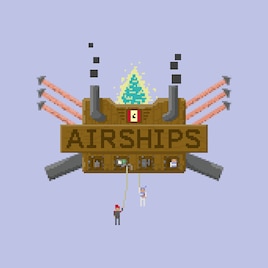 Zarkonnen
Offline
See all 23 collections (some may be hidden)

View Airships: Conquer the Skies in the store

It's out on Steam too, which means this finely crafted link now brings you to the Steam store page.

First and foremost, with new players coming in, there's sure to be new bugs discovered. So my first priority is likely going to be putting out some bugfix patches. After that, I want to spend some time on game performance. The new fancy graphics take their toll on the graphics card, and while you can switch them off, it would be much nicer if everyone could enjoy them.

Improving performance means restructuring how airships are drawn from the ground up, which is why I didn't want to risk it in the week going up to version 6. The core problem is that graphics card really hate it when you do lots of small draw calls, and currently that's exactly what's happening. You might think that a 2D game shouldn't tax the GPU that much, but when you have hundreds of airsailors on-screen and make a separate draw call for each of their limbs - it's quite bad.

The solution is to organize drawing into layers. Instead of drawing one ship, one crewmember, after the other, the game will draw all the back walls, then all the modules, then all the gun barrel, then all the crew limbs, and so on. Each of these layers can be a single draw call, collapsing hundreds of them into one.

OK, so that's the immediate plan, but what about new features? What's coming between now and the final release? Well, the development plan[www.zarkonnen.com] I laid out months ago is still more or less correct, though which feature comes in which version is subject to change. There are five major additions I have in mind:

The boarding stuff is cool and works really well, but it took such a long time that I stopped working on it as soon as I had something to show. Which means that there's some... odd missing bits: Crew stranded on the ground just stand there and are unable to move anywhere. Fixing that would pave the way for having ground troops fighting amongst one another and attacking buildings and ships. Most importantly, they can then be trod on by...

Okay, yes, the name of the game is "Airships". But landships, war stompers, steam mechs: totally cool, right? And they're basically the same as a ship or a building, they just have a different method of propulsion. The slightly hard bit here is getting their limbs and tracks to interact properly with the ground.

As it stands, the strategic mode is really very simple. It could be a lot more interesting. I'm still working on figuring how best to do this. There's a lot I could add, but it's important to pick additions that make the gameplay deeper rather than just more complicated. More detail on this in a later post.

I used to insist that Airships was totally a "Steam/Dieselpunk" game. This will finally become sort of true when diesel engines are introduced. These will be much more powerful and lightweight, and won't require manual supply of fuel, but they'll also be expensive and quite prone to catching fire in a bad way. The reference time period for Airships is about 1860 to 1940, so we'll see a bunch of slightly more modern things cropping up.

Last but not least, the game needs monsters. There's actually dragons in the game now, but only ever seen in the distance, flying past at high speed. Dragons, Turtledoves, Air Krakens, Sentient Floatweed, Giant Spiders, Mechanical Ducks! Some of them you must fight, others might be useful to your own side.

The intent with Airships v6 is very much to improve its visuals without making much of a change to the gameplay. However, in some cases, the visuals go hand-in-hand with new gameplay.

One of the major visual improvements is a lighting engine, and it would be a shame to underuse it, which means night and day, sunrise and sunset. Light conditions influence gameplay: it's harder to aim at night, and also pretty hard when you have the sun in your eyes.

Weather is the next obvious set of environmental factors to influence combat: rain puts out fires, lightning strikes create them, and low-lying fog can act as cover. I also considered wind, but there's an unsolved issue: what happens if the wind blows a ship outside of the combat area? It's something I'll revisit later.

In terms of implementation, this resulted in a list of times of day and weather effects with different lighting and sky backgrounds. In terms of visuals, well, here's some screenshots:

That's it for today! These changes will get pushed to testers shortly, and then there's really only performance optimization and more minor graphical adjustments and bugfixes left - we're on track for the February 25 release.

Read More
Description
Release date: Early Access released now. Final version in 2015.
Airships is a real-time strategy game where you design airships and then fight with them.

Ships are put together out of modules, and the layout of modules matters a great deal: everything on board is done by individual airsailors who need to run around, ferrying coal, ammunition, water and repair tools - and sometimes their fallen comrades.

You can command fleets of airships both against other players across the Internet and in single-player strategic mode, where you use your fleet to conquer city after city, unlocking new modules and bonuses with each of them.

The game has an authentic-ish system of heraldry where you can create your own coat of arms, and register it with the game forums as unique to you.

The game's currently in development and available as an early access version from its website[zarkonnen.com]. Future plans include: boarding combat, a graphical upgrade (animation, lighting fx, etc.), a more detailed single-player campaign - and dragons...
Popular Discussions View All (2)

Airships: Conquer the Skies has been Greenlit and is now listed in the Steam store. For the latest information, purchase options, and discussions for Airships: Conquer the Skies, please see it on the Steam Store or in the Steam Community.
Visit Store Page
For more details Visit Community Hub
For latest discussions
If you really, really want to, you can continue to the Greenlight page. Information on this page may be out of date, since all the action has moved to the areas noted above.