Greenlight > Games > L.S.Clark's Workshop
Greenlight is being retired. For more information on how to submit games to steam, refer to this blog post.
This item has been removed from the community because it violates Steam Community & Content Guidelines. It is only visible to you. If you believe your item has been removed by mistake, please contact Steam Support.
This item is incompatible with Greenlight. Please see the instructions page for reasons why this item might not work within Greenlight.
Current visibility: Hidden
This item will only be visible to you, admins, and anyone marked as a creator.
Current visibility: Friends-only
This item will only be visible in searches to you, your friends, and admins.
Rooftop Cop
Description Discussions1 Announcements1 Comments34 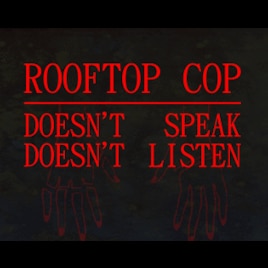 L.S.Clark
Offline
See all 5 collections (some may be hidden)

View Rooftop Cop in the store

Hey, thanks for all the votes/comments so far! There have been a number of folks saying the video/screenshots are too opaque or misleading -- I added a bit of info on general controls in the description, but won't go much further. At risk of underselling myself, I think it's worth keeping much of the game obscure because I think that's where the joy lies, and others have told me that as well.

Regarding the "English only" tag, there is very very little text in the game. None of it is *crucial* to being able to play, it is mostly there as ornament. So although I don't have plans to localize, I don't think it will be as much an issue as it might seem!

It is five *completely different* games, which are fairly short experiences on their own but add up to something greater. :)

Read More
Description
Release date: FALL 2014
A world of Police that have forgotten what, and why, they are policing. Rooftop Cop is a collection of five endless vignette games and a 7-track album. Each game visits a different point on a loose timeline as the Cops slowly lose their way; largely a mood piece, the gameplay ranges from atmospheric wandering to arcade-style action.

Each game has a different control scheme and an important part of the game is determining what to do and how to do it.

THE GAMES
I: A Proud History -- top-down movement, and mouse, manage the resources of two tiers in a power struggle
II: Capture the Flag, for One -- move left, right, or climb, and try to capture flags
III: The Datamines -- run left and right to gather evidence, fall through floors
IV: God Bles Everyone -- RTS-style select&move, explore surroundings
V: Palace of the Organizer -- click-to-move, carry objects around, explore

WHY GREENLIGHT?
This was initially my MFA Thesis project, and I've finished a release version which is currently only available through itch.io. The games are non-traditional, and varied; Parts 1,2, and 5 are more of a mood focus, while Part 3 could be played as a score-attack game. They are all endless and non-linear, and Part 1 even has you playing both sides of a conflict as a performance.
Although originally an art project, I think there are certainly folks on Steam who might appreciate this format! Included in the release is an album version of the game, which is the music from Rooftop Cop plus some additional material.

You can find more info at: rooftopcop.com
Or reach me on twitter @stephen__clark
Thank you!!
Popular Discussions View All (1)

Atlas Aug 14, 2014 @ 1:35am
Vote yes! Of course there would be someone not understanding what it is because there is nothing like this ever made. Art should not be explained - itself is the presentation.

eeease Aug 4, 2014 @ 3:41pm
Voted yes to support NYU Game Center, where I may be MFA-ing next fall. Also, I love me a good abstract, atmospheric game!

What on earth made you think that enfuriating mess was a good idea to be the first introduction to your game? o.0

All it does is it makes me want to lit a bag of poop on fire outside your door.

It made me reluctant to watch the other videos to get an idea what your game is about... and after watching those two I still do not know what is happening in them or what you as a player is supposed to do in your game.

As of this paragraph I've finally read the description, I'm still annoyed about that first video which just seems like a horrid mess trying to clusterfuck my senses of sight and hearing. But at least the other 2 vids makes a bit more sense (but still not enought).

I would suggest making a video where you talk to the viewer about what is going on on the screen.

Rooftop Cop has been Greenlit and is now listed in the Steam store. For the latest information, purchase options, and discussions for Rooftop Cop, please see it on the Steam Store or in the Steam Community.
Visit Store Page
For more details Visit Community Hub
For latest discussions
If you really, really want to, you can continue to the Greenlight page. Information on this page may be out of date, since all the action has moved to the areas noted above.