Greenlight > Games > AngryTomato's Workshop
Greenlight is being retired. For more information on how to submit games to steam, refer to this blog post.
This item has been removed from the community because it violates Steam Community & Content Guidelines. It is only visible to you. If you believe your item has been removed by mistake, please contact Steam Support.
This item is incompatible with Greenlight. Please see the instructions page for reasons why this item might not work within Greenlight.
Current visibility: Hidden
This item will only be visible to you, admins, and anyone marked as a creator.
Current visibility: Friends-only
This item will only be visible in searches to you, your friends, and admins.
Engauge
Description Discussions2 Announcements4 Comments175 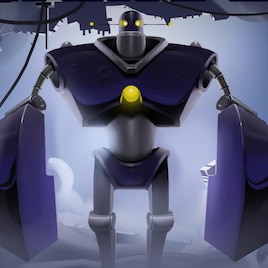 I know it's been a while since our last update, but I wanted to let everybody who cares about Engauge know that we're still alive and kicking!

We've changed quite a lot of Engauge since you last saw us. So, let's get started right away.
NOTE: I put the link underneath each picture, since the pictures don't seem to show up in the Steam Client. They do show up on your favorite browser, though!

This here is our friend, Mad Mo. He's not actually mad, he just looks that way.

Progress on Engauge is slow but steady. This past week I worked on Mainbots Melee Core. If you don't know, Mainbot (our hero) will travel the world and acquire Cores along the way. Cores are just a bunch of abilities rolled into one. They work much like in Smash Brothers. The Up-B, for example, launches Mainbot in the air. Side-B makes him spin like a tornado. Down-B makes him cannonball into the ground. Neutral-B is a charged super-punch.

We've got all four mechanics of the first core working, although this is just the first iteration. I can already tell that his Side-B will need to move Mainbot horizontally and that his Neutral-B requires a much better punch animation.

We've also got several enemies in there that actually run around and try to murder you. They're not quite as smart as this behavior tree would lead you to believe, although they do have some basic pathfinding.

We've also been working on some different ways to move around the world, such as the vines. For anybody who cares, they're made up of a series of HinjeJoint2Ds with angle limits. The player (or any character, such as an AI) can push on the vine. This is just a simple horizontal Impulse force.

The mesh is built dynamically. Under the hood, it's actually just a SkinnedMeshRenderer with a custom Mesh and weights. Each dot is a HingeJoint2D (controlled by Rope Length and Rope Length Per Segment). The Rope Width is just how wide the mesh is. It actually was pretty painful to make sure the mesh was not saved by Unity.

Here you can see the ropes in action. Observe how Mainbot effortlessly flies through the air! Ignore the random screenshakes. It's our friend Mad Mo. He's a little upset that he didn't get to show off in this webm.

That's all for this update. There's a countless other things we've worked on since the last update, but I don't really remember all of them. It doesn't help that my commit messages are probably not too accurate.

So, until next time!

Hey Greenlight!
Thanks for all of the support of all you wonderful folks out there! Thanks to you, we're already at 50% on Kickstarter!

Here at the Toastie Republic, we believe in being swell guys. This means recognizing the other fantastic projects that exist in the world, namely "Jotun" and "Aegis Defenders"!

But most of all, don't forget to brush your teeth before going to bed. Wouldn't want to have bad breath in the morning, would ya?

About Engauge
Engauge is a 2-D action platformer set in a vibrant world of buzzing machinery.

You adventure as a hulking robot known as X1S. X1S isn't exactly the talkative type but thanks to your razor-sharp intuition we know that X1S is searching for objects he lost long ago.

Though it's been awhile since he last moved, X1S is still well-equipped for high adventure. His powerful, mechanical body smashes through enemies with ease and his trusty power-core allows him to assimilate with new technologies!

Follow us on our blog at http://www.toastierepublic.com/
Check out Engauges official website for more information at http://engaugegame.com/
Popular Discussions View All (2)

AngryTomato  [author] Mar 9, 2017 @ 7:08pm
Hey Gorlom[Swe], Engauge is still alive and kicking!
In fact, we'll be posting an update this Friday on Kickstarter.
Thanks for having faith!

Gorlom[Swe] Jun 21, 2016 @ 7:20am
Ok, it seems a lot has happened (judgeing by the screenshots and videos on the kickstarter page and website). the updates are few and far between though :(

And now Tostie Republic has changed name to "angry Tomatoe"? Why?

Anyway: How is it going guys? and why did you change the design on the playercharacter? I liked the one shown here on Greenlight rather than the new one... The new one looks like he clashes a bit with everything else easthetically. He looks like he is trying to be 3D rather than painted. :(
Oh well you've put in a lot of work on the new one so I'll have to get used to that I guess.

I'd love to hear some more from you guys I'm still looking forward to Engauge a lot!

Gorlom[Swe] Sep 13, 2015 @ 5:54pm
argh missed the kickstarter. I thought it was going to be this month. :(
Oh well, at least the game is still alive and well. I just realized the devs of another game I was hoping for had stopped communicating a while back. Much to my dismay :(

Gorlom[Swe] Jan 24, 2015 @ 2:02am
@danielb_99 what is the problem? Games take a while to develop. I'd rather they take their time and make a good game than rush out crap.
This has the potential to be magical, epic, awesome, wonderful, aweinspireing etc etc.

Everything they have shown so far is impressive and I am sure the end product will be more than worth the wait.

AngryTomato  [author] Nov 3, 2014 @ 1:28pm
Hey there Gorlom! We're still working on it. At the moment there isn't much nice and polished stuff to show off, but we have been posting some concept art at our Twitter (twitter.com/toastierepublic)!
< >