Store Page
Crysis Wars > Guides > [Sco] Cooper Kid's Guides
This item has been removed from the community because it violates Steam Community & Content Guidelines. It is only visible to you. If you believe your item has been removed by mistake, please contact Steam Support.
This item is incompatible with Crysis Wars. Please see the instructions page for reasons why this item might not work within Crysis Wars.
Current visibility: Hidden
This item will only be visible to you, admins, and anyone marked as a creator.
Current visibility: Friends-only
This item will only be visible in searches to you, your friends, and admins.

How to: Crysis Wars Multiplayer Mod
By [Sco] Cooper Kid
Since July 2014, Gamespy has stopped supporting servers for many games, including Crysis Wars. This means that multiplayer games are no longer officially supported. However, all is not lost - a mod has been developed which enables multiplayer games through a different set of servers, so we can keep playing this awesome game.

Comments
Introduction
This mod allows you to play online multiplayer in Crysis Wars without using the now inactive GameSpy servers.

The mod requires the installation of the Crysis Wars Extended mod, which itself includes many new features, such as additional maps, tweaked gameplay mechanics and even new game modes.

Disclaimer: I am not the creator, nor am I affiliated with the creators of any of these mods. Full credit goes to the guys at OM Studios[www.om-studios.com] for the Crysis Wars Extended mod and multiplayer mod. A shout out as well to DieAerzte94[germancrysis.com] on the German Crysis forum, who presented the first guide on installing the mods. This guide is a somewhat more comprehensive version for anyone using Crysis Wars on Steam.
Requirements
Before going any further, you should check that your version of Crysis Wars is up-to-date. Steam should of course do this for you, but it never hurts to be certain, and could save some trouble later on.

Open Crysis Wars, and double-check the version number in the bottom-right corner. It should say 1.1.1.6729 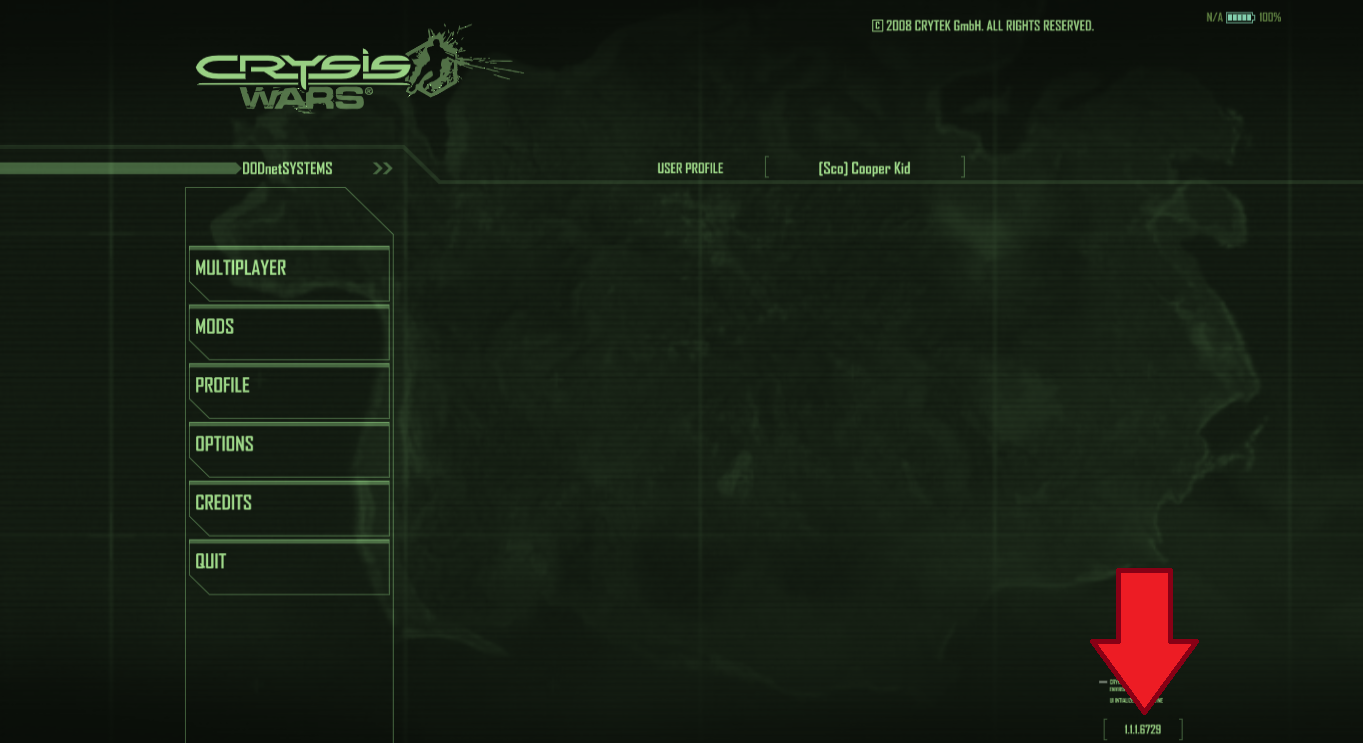 If your version of the game is up-to-date, we're all good. If not, exit and make sure Steam has updated the game to the latest version. Verifying the game cache can fix most issues if a game isn't updating itself.
Install Crysis Wars Ex Mod
Before we can install the multiplayer mod, the Crysis Wars Extended mod has to be installed. Download the file crysis_wars_ex_final.exe from one of the mirrors below:
It's a fairly sizeable file (~400MB) so could take a little while. Once you've got it, simply open it and the installer will jump into action.

Work your way through the installer's instructions. When the option arrives to choose a destination folder, you need to select your Crysis Wars root folder. On most systems, this will be:
C:/Program Files (x86)/Steam/steamapps/common/Crysis Wars.

Now, just let the installer do its thing. Once finished, it should have added a new folder called Mods in your Crysis Wars directory. If that's there, then the mod has installed successfully. Congratulations! We're ready for the next step.
Install Multiplayer Mod
Now we need to install the mod that actually enables online play. Once again, download the file (CrysisWarsEX_1_1_4.exe) from one of the mirrors I've provided below:


This file is around 50MB in size. Once you have the file, run it as with the last one, and the installer will start up. Once again, we need to change the installation location to your Crysis Wars directory:
C:/Program Files (x86)/Steam/steamapps/common/Crysis Wars 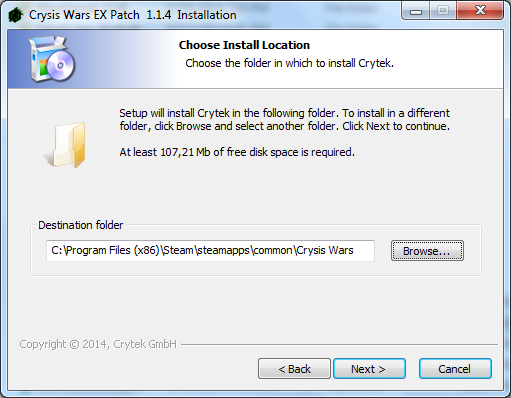 With the mods installed, it's now time to get the game running.
Enable Mod
Now, we need to enable the mod that we've installed. Open Crysis Wars through Steam as usual, then click the Mods button on the main menu. 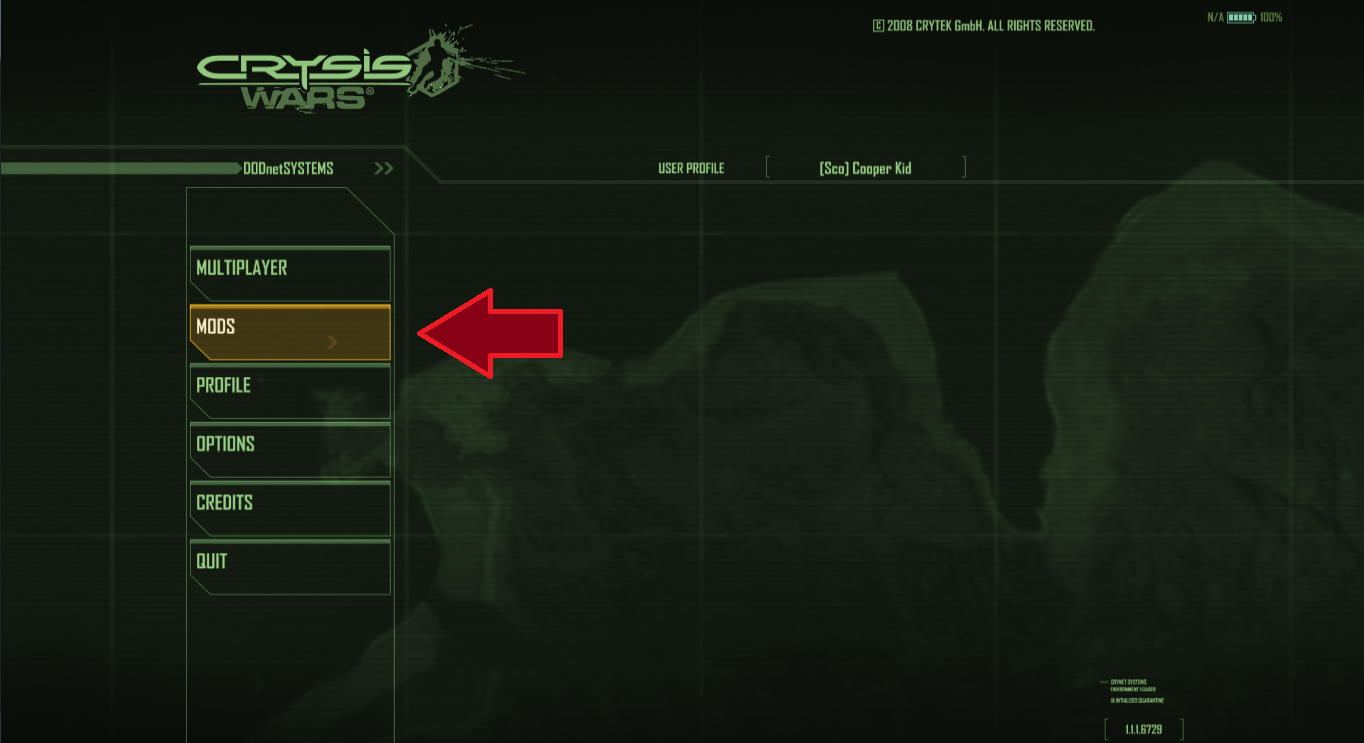 The Crysis Wars Ex mod should now be listed on the right. Make sure it's selected, then hit Load. 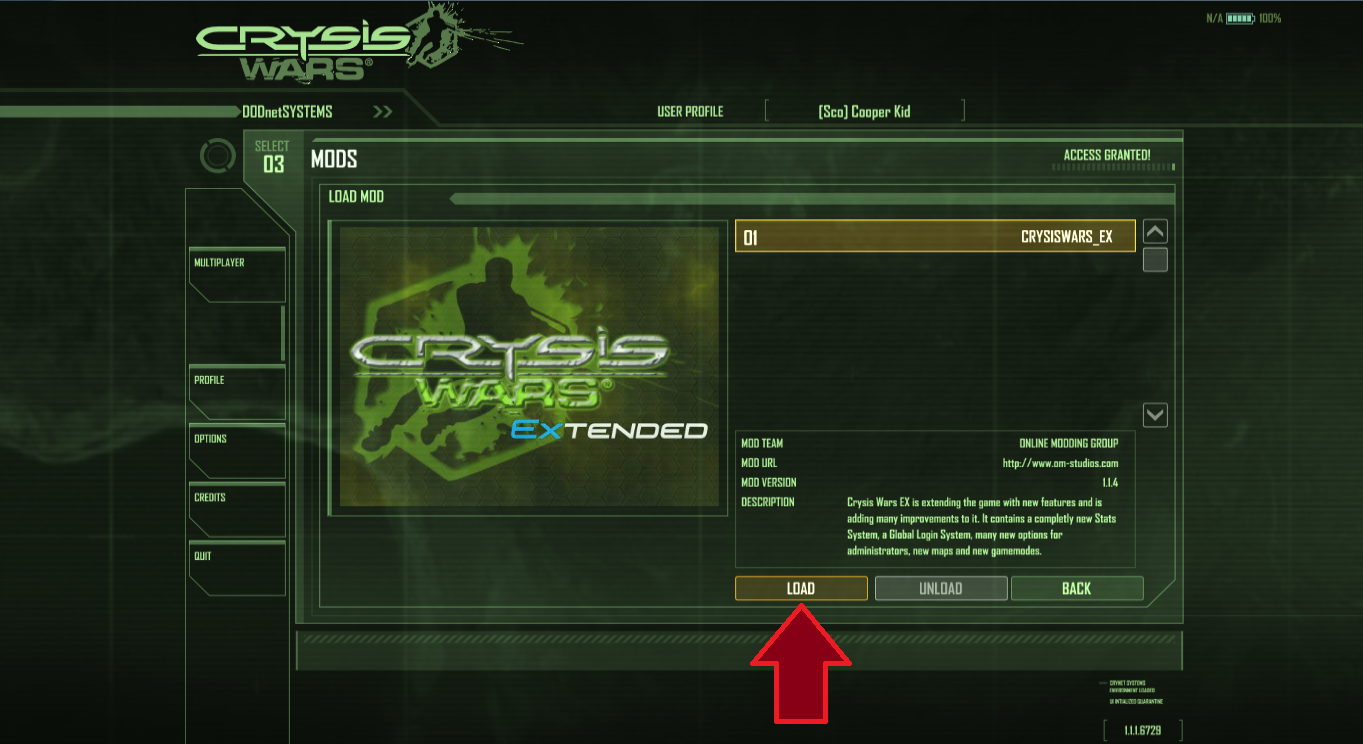 A warning will pop up asking you to restart the game. Click yes, and the game will restart on its own. Don't try to re-open it yourself - just be patient. 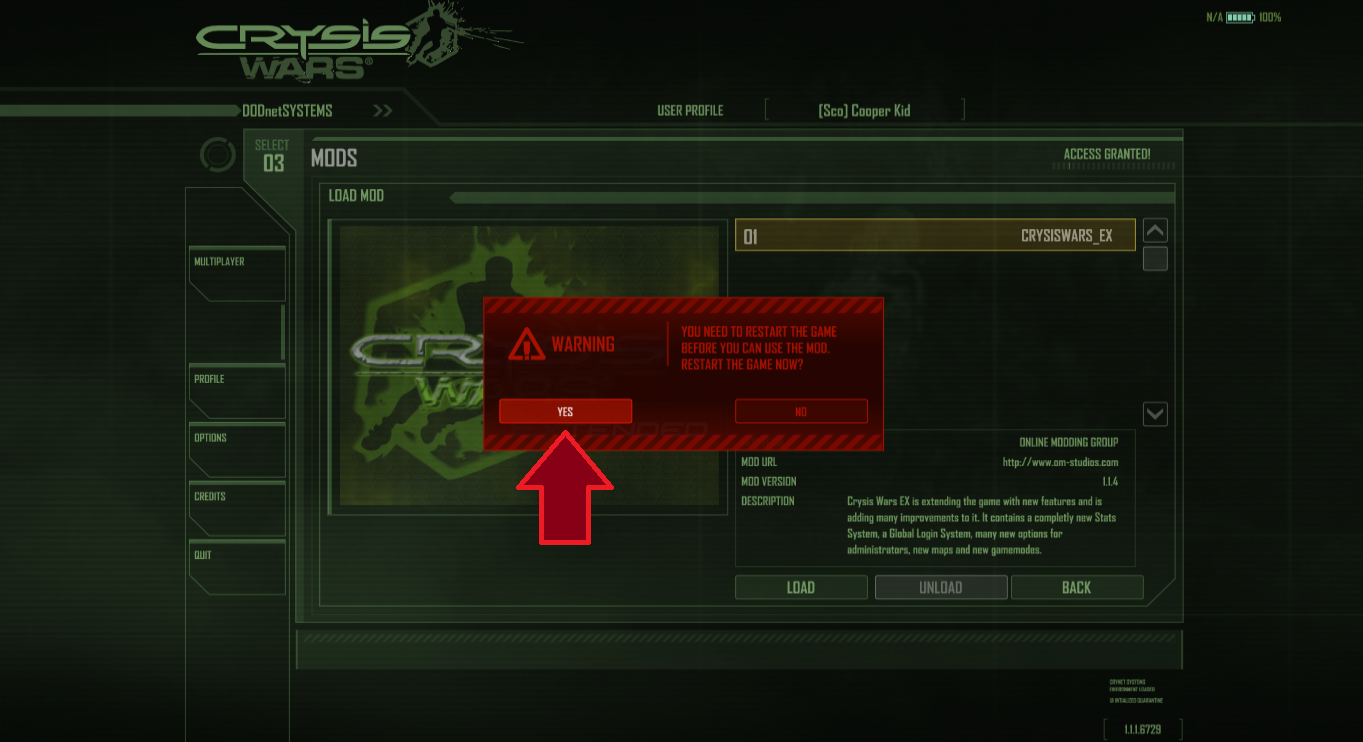 Once the game restarts, we should be greeted by some changes to the main menu. The logo at the top should have changed to Crysis Wars Ex, and down at the bottom-right of the screen next to the version, there should be some yellow text indicating the mod that's running. 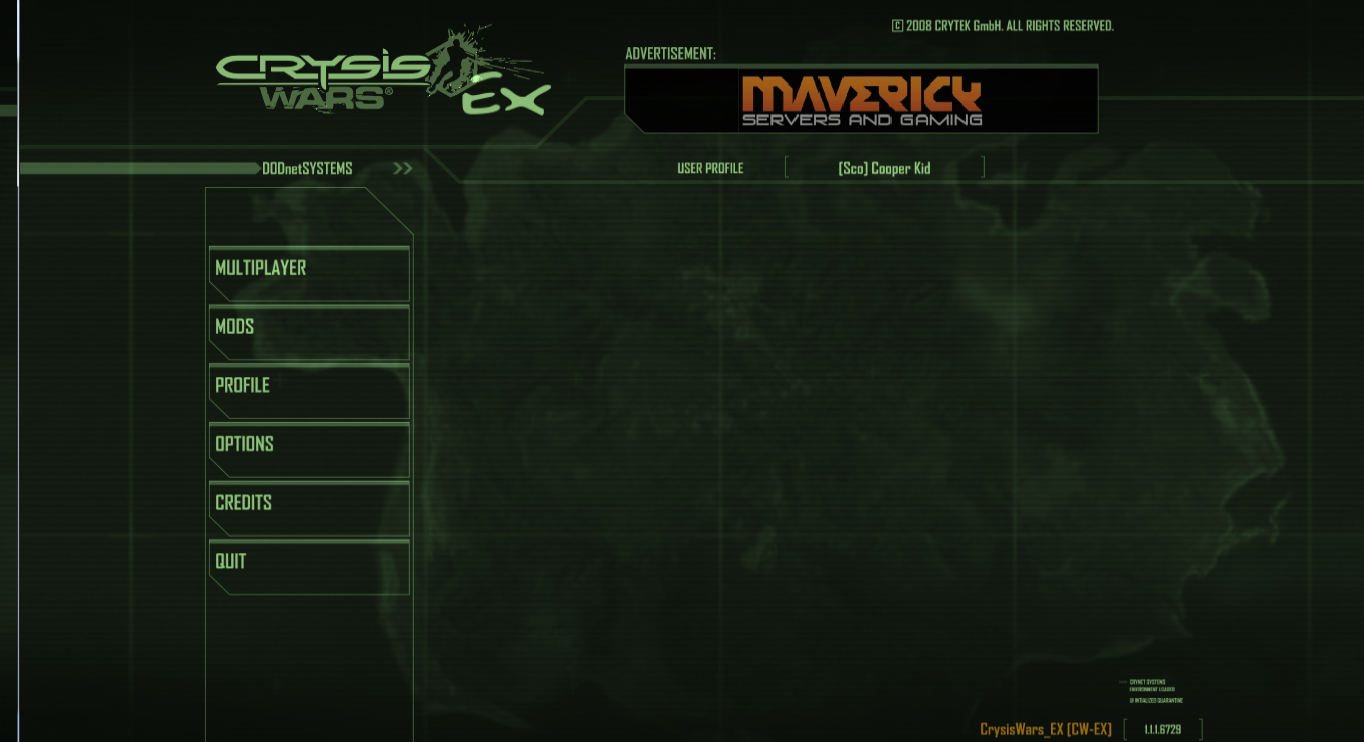 With everything in order, let's get online!
Logging In
First things first - start up multiplayer the usual way: Click the Multiplayer button in the main menu, then click on Internet Game. A pop-up box will say Contacting Crynet Systems Server. THIS WILL TAKE UP TO 30 SECONDS. Don't close it! Just let it take its time. 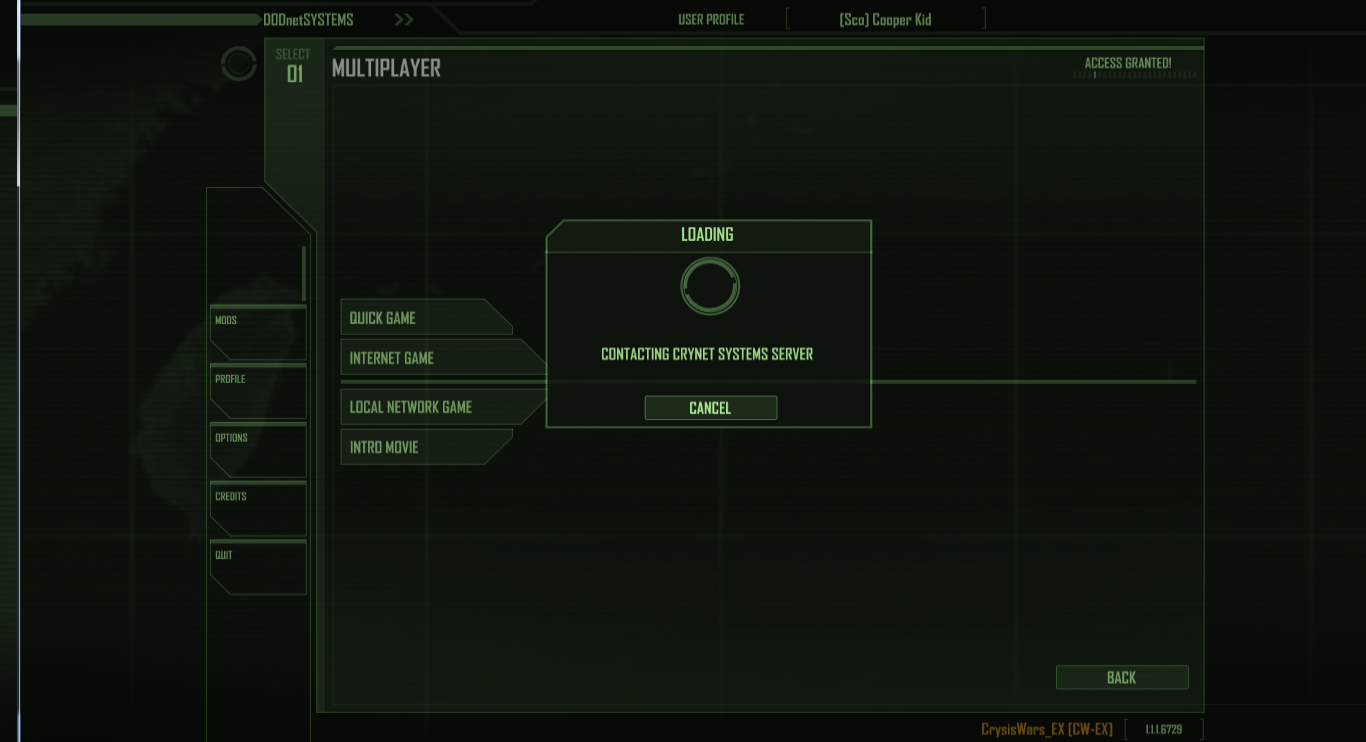 After a short while, you'll be greeted with the usual CryNet login window. Here's where things are going to get a little different - Gamespy is no longer active so you can't use your old Gamespy account. Type in the username you want (anything will do), and use crysis as your password. Then click login.

You'll be greeted with a second login window - this one for the new OMG! servers. Click Create new account and fill in your details as desired. Then click login, and you're done. After a quick load, you should have a list of servers.

We're done! You're back online and can keep playing this awesome game with players from around the globe. Although the servers are fairly barren at the moment, as more people hear about this mod soon player numbers will rise again.

It's up to people like you and me to spread the word and keep Crysis Wars alive!

Any queries or problems, please comment below and I'll do my best to answer.
< >
177 Comments

junglewacheechy Jun 17, 2022 @ 5:37pm
Realistic Bots Scripted into game will be cool like CSGO

paul.mountain3 Jun 1, 2022 @ 8:59am
Followed the tutorial exactly and got OMG stats connection error. Tried the youtube link below - it says the account has been closed.

Goodboy Aug 6, 2020 @ 12:07pm
hey, i have a problem, i click on mods to load the mod version, game switching to this mod version and im getting a crash and game closing itself

desislava.net Jan 17, 2020 @ 10:22am
The programmer will try to answer to your question Hitman72ita in GermanCrysis.com forum