Greenlight > Games > Gnomic Studios's Workshop
Greenlight is being retired. For more information on how to submit games to steam, refer to this blog post.
This item has been removed from the community because it violates Steam Community & Content Guidelines. It is only visible to you. If you believe your item has been removed by mistake, please contact Steam Support.
This item is incompatible with Greenlight. Please see the instructions page for reasons why this item might not work within Greenlight.
Current visibility: Hidden
This item will only be visible to you, admins, and anyone marked as a creator.
Current visibility: Friends-only
This item will only be visible in searches to you, your friends, and admins.
Square Heroes
Description Discussions8 Announcements13 Comments763 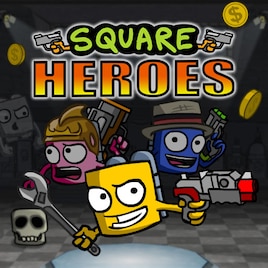 Gnomic Studios
Offline
See all 27 collections (some may be hidden)

View Square Heroes in the store

Thanks for being patient everyone. We're expecting to have the Steam version publicly available in March now. It's taken longer than expected as we decided not to rush the launch and instead add a few more features. Being a multiplayer focussed game, it's vitally important that Square Heroes can sustain a decent user base (ie you!). The features we're adding are based on this:

We're also still deciding how exactly to integrate Steam leaderboards. One idea is to have monthly seasons where the amount of XP you earn is essentially your score. I'd be interested to hear other ideas though.

- Aranda
Read More
Description
Release date: OUT NOW! www.squareheroes.com
Square Heroes is a hardcore comical arena shooter featuring Online, LAN, Co-op and local multiplayer gameplay, a single player Tournament and an arsenal of weapons to blast your friends out of the sky!

The Square Avengers are proving their credentials in the Galactic Hero's Tournament. Hone your skills and level-up your character in the local single-player tournament, or skip straight to the main event and challenge your friends in one of the hilarious and frantic online skirmish modes.

Game mechanic
Square Heroes features a unique gameplay mechanic: choose your available weapons at the start of a round and unlock them by collecting loot. Rounds begin with Melee combat and progress through weapon categories of Light, Heavy, Explosive and Special. This mechanic ensures gameplay variety so each match is never the same. Strategically choose your load-out to defeat your foes!

RPG elements
Earn experience points during gameplay to level-up your character. Reaching a new level rewards you with an awesome new weapon or a stylish new hat. Enhance your character's statistics by choosing from the unlocked melee weapons and hats.

Other Features
Platforms
PC, Linux and Mac. There are also plans to port Square Heroes to consoles.

Languages - which languages (other than English) would you like to see Square Heroes in?
markmnl

Square Heroes has been Greenlit and is now listed in the Steam store. For the latest information, purchase options, and discussions for Square Heroes, please see it on the Steam Store or in the Steam Community.
Visit Store Page
For more details Visit Community Hub
For latest discussions
If you really, really want to, you can continue to the Greenlight page. Information on this page may be out of date, since all the action has moved to the areas noted above.