Greenlight > Games > v4corg's Workshop
Greenlight is being retired. For more information on how to submit games to steam, refer to this blog post.
This item has been removed from the community because it violates Steam Community & Content Guidelines. It is only visible to you. If you believe your item has been removed by mistake, please contact Steam Support.
This item is incompatible with Greenlight. Please see the instructions page for reasons why this item might not work within Greenlight.
Current visibility: Hidden
This item will only be visible to you, admins, and anyone marked as a creator.
Current visibility: Friends-only
This item will only be visible in searches to you, your friends, and admins.
SunAge: Battle for Elysium
Description Discussions5 Announcements6 Comments467 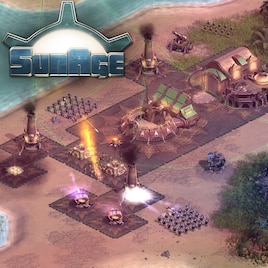 v4corg
Offline
See all 25 collections (some may be hidden)

View SunAge: Battle for Elysium in the store

It's finally done. I can haz release candidate. And I have to say I really really like what I did to SunAge in the last few months.
Thanx to your feedback (and that of the steam beta group ofc.) there's a ton of improvements in all areas.

So now I have to get some final things ready (press release, contacting reviewers, aso.)

We totally did it !!! Thanks for all your fantastic support.

Next on the roadmap:
A closed beta with some selected members of the community here to find out about the most common preferences. Focussing will be mainly on the multiplayer part of the game, and some minor handling/controlling questions.

With Earth teetering on the brink of extinction, the human Federals and mutant-gene Raak-Zun are battling for control of its dwindling resources. Into this savage conflict step the mysterious Sentinel, exploiting superior technology that opens gateways to an alien and resource-rich planet.

SunAge: Battle for Elysium is the remastered version of a new-breed classic-feel RTS featuring:

SunAge is a return to the roots of real-time strategy, providing beautiful 2D visuals combined with all the features that we came to expect from old school classics.

This remastered version is a culmination of all the fixes and improvements since release including new features that were implemented based upon suggestions and requests from the community.
< >
467 Comments

v4corg  [author] Dec 3, 2014 @ 3:20am
Besides achievements the release version is going to be finished today. Press release is going out begin of next week. ETA of release: 15th of december.

SunAge: Battle for Elysium has been Greenlit and is now listed in the Steam store. For the latest information, purchase options, and discussions for SunAge: Battle for Elysium, please see it on the Steam Store or in the Steam Community.
Visit Store Page
For more details Visit Community Hub
For latest discussions
If you really, really want to, you can continue to the Greenlight page. Information on this page may be out of date, since all the action has moved to the areas noted above.