Store Page
Tabletop Simulator>  Workshop > Lirius Games's Workshop
This item has been removed from the community because it violates Steam Community & Content Guidelines. It is only visible to you. If you believe your item has been removed by mistake, please contact Steam Support.
This item is incompatible with Tabletop Simulator. Please see the instructions page for reasons why this item might not work within Tabletop Simulator.
Current visibility: Hidden
This item will only be visible to you, admins, and anyone marked as a creator.
Current visibility: Friends-only
This item will only be visible in searches to you, your friends, and admins. 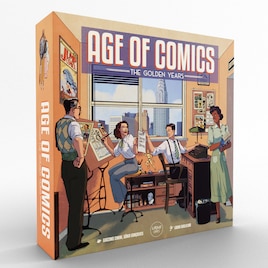 This item has been added to your Subscriptions. Some games will require you to relaunch them before the item will be downloaded.
Description
Age of Comics: The Golden Years (soon on Kickstarter) is a workers placement strategy game with a deck building element. You will play the role of a comic book publishing company during the Golden Age of comic books (1938-54). Hire artists & writers, publish amazing comic books, and compete on the ground to get the best newsstands to distribute them, build your fan base and create your comic book empire.

GOAL
The goal of the game is to achieve the most victory points (VP) through publishing the best comic books, collecting fans, rankings on the chart and earning money.