Greenlight > Games > Game4Phone.com's Workshop
Greenlight is being retired. For more information on how to submit games to steam, refer to this blog post.
This item has been removed from the community because it violates Steam Community & Content Guidelines. It is only visible to you. If you believe your item has been removed by mistake, please contact Steam Support.
This item is incompatible with Greenlight. Please see the instructions page for reasons why this item might not work within Greenlight.
Current visibility: Hidden
This item will only be visible to you, admins, and anyone marked as a creator.
Current visibility: Friends-only
This item will only be visible in searches to you, your friends, and admins.
Angry Driver
Description Discussions3 Announcements1 Comments164 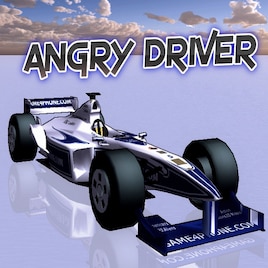 Game4Phone.com
Offline
See all 5 collections (some may be hidden)
Recent Announcements View All (1)
Many thanks for supporting Angry Driver on Steam
May 14, 2015 - Game4Phone.com

I would like to thank you for getting Angry Driver approved on Steam. It looks like I have some reading of documents and signing of paperwork. I will endeavour to keep all the Angry Driver followers updates as to the progress. Thanks again. Regards Kevin.

Read More
Description
Angry Driver
by www.Game4Phone.com
Brings you the best in racing games. Super fast action A design based on a mix of the best of the worlds racing tracks and racing drivers opinions. Superb graphics, racing music, drifting into the bends. Race against other drivers and knock them off the race track. Your car is the heaviest on the race circuit so throw it about and use it to your advantage! Control the hills to gain maximum momentum, hurling yourself into the corners. Challenge for the pole position in this gripping race. Once your gripped you'll love the dynamic action.

Angry Driver has 2 tracks the one which is shown in the screenshots here as well as a Stadium track with different graphics and layout.

The game is currently released on Blackberry and the Apple Mac store as well as iPhone and iPad under the name ( Racing Revs Extreme Driver ) you can read more as to why my game had to change its name here (There is no real reason which makes it all the more mysterious ) :

Yes you are right the name Angry Driver is much better than Racing Revs Extreme Driver!
For those platforms you can get all the links from :

Given the chance to release on Steam for PC and possibly Linux I would increase the sound quality, increase the graphics quality and
make use of whatever bringing this game to a PC platform may open up for me.

I have drawn on the retro games of the eighties 80s and made the fastest driving game I could.

So by supporting this game I thank you for being so kind in supporting me and increasing my pleasure in creating games for Steam for PC's and the existing platforms where Angry Driver is already released.