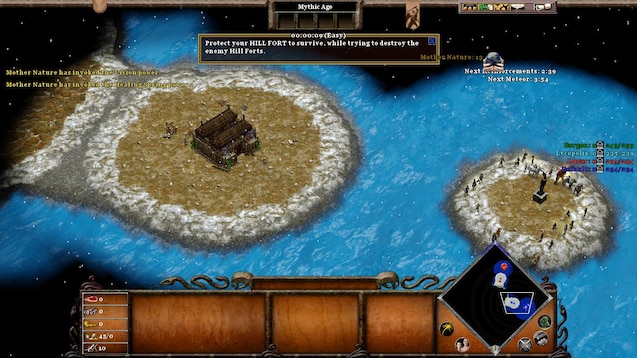 See all 15 collections (some may be hidden)

This item has been added to your Subscriptions. Some games will require you to relaunch them before the item will be downloaded.
Description
NORSE WARS 9 (With superbonus)


This script uses a lot of advanced features to create a randomly generated blood-style map with buyable units, technologies and god powers using favor from kills. Players start in small bases around a circular arena with a Healing Spring in the middle and must battle for the favor of the gods to get soldiers or buy myth units, upgrades and god powers. The three major gods get different bonuses, and each game, there are many paths to victory - you must choose wisely what strategy you will use to dominate your opponents.

Version 6.0 adds the following new features:
- Two new environments: Tundra and Marsh, with the new terrains and units in The Titans expansion pack.
- New Large Map Mode: on Large size maps, the center of the map is a large maze with many forests. There are multiple Healing Springs, which grant a steady trickle of favor to the player who controls them. Furthermore, players can build Towers (50 favor) and Sky Passages (40 favor). The game plays out more like a Supremacy game with raiding, map control, and scouting, leading to large, epic battles.
- Limited each god power to only one use at a time, to prevent some of the bugs that were happening with powers like Flaming Weapons.
- Removed Restoration. You can now repair your Hill Fort with Norse infantry by just rightclicking it. This costs favor from your stockpile.
- New god powers: Implode, Spider Lair, Carnivora, Plague of Serpents, and more. On each map there are now 2 random environment-based powers.
- New rewards for kills, to add new strategies and choices. When you reach 100, 300, 600 and 1000 kills, you recieve a choice of 3 rewards on a small island at the bottom of the map. These are major rewards and they get bigger as you gain more kills. The choices include +50% Myth Unit Speed, Super Hersirs, Omniscience, a mighty Titan, and more.
- New maximum caps and ramping costs on the upgrades.
- Many balance changes.

- Every player controls a Hill Fort, and they lose if it is destroyed
- Players are all Norse and get favor when their human units fight
- Human units spawn for each player at their Hill Fort. The player can choose between Archers, Infantry or Cavalry using the Flag Bearer on his island. The more favor a player has, the better the units he gets become.
- Favor may be paid on the store island behind players' bases to:
- Buy a god power (available powers depend on the map)
- Upgrade weapons, armor or shields (the price increases each time you buy upgrade, and the maximum cap is 7 of each)
- Buy a myth unit or hero (available units depend on the map)
- Buy your god's unique unit
- Favor may also be used to repair your Hill Fort; just task a Norse infantry to it by rightclicking.
- When you reach 100, 300, 600 and 1000 kills, you recieve a choice of 3 rewards on a small island at the bottom of the map.
- Every 3 minutes, players recieve Reinforcements (units and a bonus) based on god choice, and every 4 minutes, the center is Meteored
- On Large maps, the following changes are present:
- The center of the map is a maze of forests containing several Healing Springs (one between every two players and one in the center).
- Each Healing Spring you control gives you 10 free favor per minute
- Players may use infantry to build Towers for 50 favor, or Houses, which are converted to Sky Passages, for 40 favor.
- Upgrades cost more and have a higher cap, and Hill Forts are more powerful.

- Very fast download time due to small file size
- Supports anywhere from 2 to 12 players
- Six random skins: Greek, Egyptian, Norse, Underworld, Tundra and Marsh with different terrains, random buyable god powers and random buyable units based on thos environments
- Many strategies for victory: will you hoard favor to get more auto-spawning soldiers, buy weapons/armor to upgrade your troops, field an army of myth units, control the Healing Spring in the center, or make use of god powers to defeat your opponents?
- Unique civilization bonuses and units make the three major gods balanced yet radically different
- Random fast-paced battle music to keep you on your toes
- Every map generated is different and requires players to adapt
- Countless hours of fast-paced fun! There will be swords clanging, arrows whizzing, monsters roaring and units flying through the air from the first minute onward.


HOW TO HOST A GAME:

- Norse Wars should be played mutiplayer with human players, as computer players don't know how to use favor to buy things.
- Host a game using ESO Advanced Setup or LAN/DirectIP.
- Select Supremacy under Game Type.
- Click Select Map and choose Norse Wars 6.0 from the list.
- Choose either Normal size or Large size (Normal is for free-for-all's and shorter, faster games; Large is great for intense team battles and big struggles for control).
- All players must be Norse to get favor from fighting.
- If you want to play in the Norse Wars Ladder, you can sign up and report games at www.NorseWars.com.

- You are free to use this script or parts of it in your own work, but PLEASE GIVE CREDIT TO THE ORIGINAL AUTHOR (MATEI) IF YOU DO SO! Use a script comment and an in-game text message.
- If you want to edit the map, PLEASE DO NOT MODIFY THIS FILE. Copy the file and rename it, so that there aren't any file name conflicts with people who don't have your edited version.
- If you have any questions about the map, post them in the Woad Creations forums at www.woadcreations.com.

I would like to thank the following people:
- The members of Woad Creations, especially Shiva and Yhagoro, for their playtesting and their excellent advice on all aspects of the map
- The NW and Phoenix clans, for organizing www.NorseWars.com (the NW ladder and forums)
- The VinaCIS clan, for some of the balance suggestions for Norse Wars
- The makers of SCNPunk's Troy Massacre, where I got the random battle music idea from (Troy Massacre is really a blast to play!)
- Wolfenhex, for the trigonometry functions in his map, "The Void"
- TwentyOneScore, for his posts on using custom triggers in RM scripts
- And last but not least, all the Norse Wars fans on ESO. It's great to see that people enjoy playing this map as much as I enjoyed making it :)
< >
31 Comments

It's a me! Just downloaded AOM EE

nottud  [author] May 3, 2020 @ 9:26am
9.1 update:
I have fixed the OP range on Throwing Axemen of Loki and set it back to what it should be. I have added message showing what the show items are when you select them saying what the item is and the current price - this should make the game much easier to understand for new players.

Pascal Dec 25, 2015 @ 12:05am
nottud good job. So did you just break those strings into two chat messages or even more for that matter? Also if your change log is correct then this was not based off Matei's last version of Norse Wars which was version 6.0. That version is still available at AOMH. But likely due to the same issue you fixed here, it just hangs in EE. I am curious how you tracked down the problem without a functioning rms debugger?

AoMH is a thing, you know. AFAIK al maps and such form there SHOULD still be compatible with this version, as it's little more than a graphical update, really...