Greenlight > Games > Nonadecimal's Workshop
Greenlight is being retired. For more information on how to submit games to steam, refer to this blog post.
This item has been removed from the community because it violates Steam Community & Content Guidelines. It is only visible to you. If you believe your item has been removed by mistake, please contact Steam Support.
This item is incompatible with Greenlight. Please see the instructions page for reasons why this item might not work within Greenlight.
Current visibility: Hidden
This item will only be visible to you, admins, and anyone marked as a creator.
Current visibility: Friends-only
This item will only be visible in searches to you, your friends, and admins.
Social Justice Warriors
Description Discussions16 Announcements8 Comments567 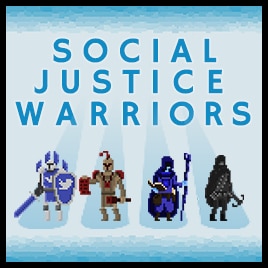 Nonadecimal
Offline
See all 50 collections (some may be hidden)

As you may have noticed by now, Social Justice Warriors has been greenlit by the community (and released on Steam!)! After 10 months of ups and downs, thousands of comments that resembled the game itself, two major content updates, and raising $200 for charity[nonadecimal.com], the game is finally coming to Steam! 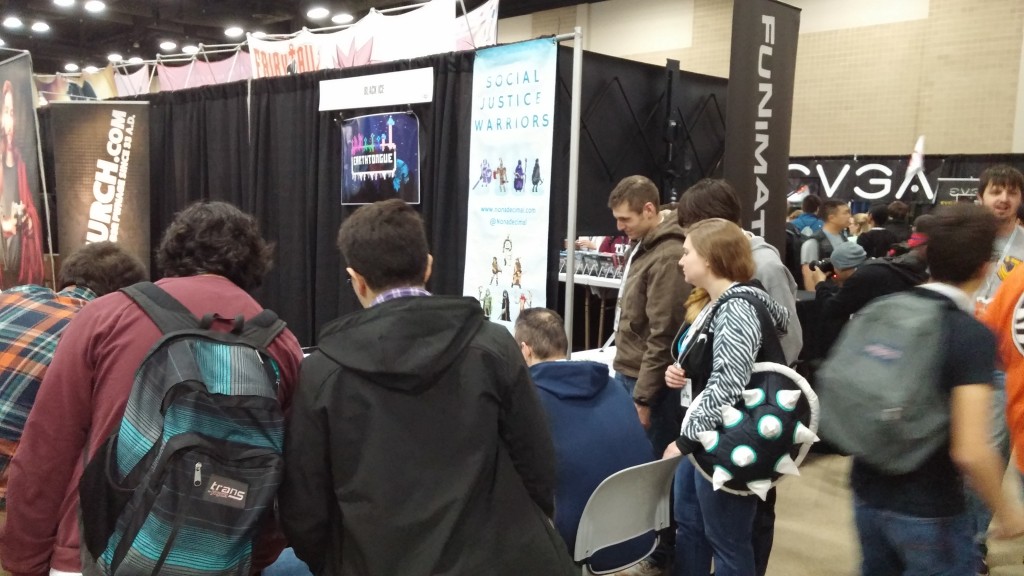 Social Justice Warriors had a great showing at PAX South a few weeks ago. Not only was it greenlit that weekend, but it received some high praise from IGN in their PAX feature "Why We Need Games Like Social Justice Warriors." I had the wonderful opportunity to show the game to thousands of people and hear why the game was important to them. It was incredibly rewarding to see the game actually making a difference. You can read more about the PAX South booth for SJW here.[nonadecimal.com]

But you're probably more interested in the upcoming Steam release. The good news is that it's launching February 27th! That's like... this Friday.That means you can add it to your wishlist today and get immediate notification when it releases. Check out the store page! And don't forget to tell your friends! 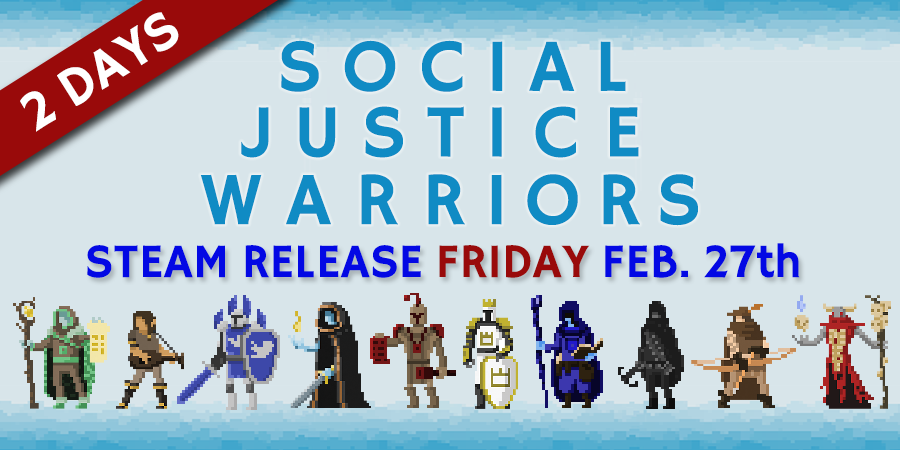 Last April, I made the Social Justice Warriors[www.nonadecimal.com] to express my frustration with how people were using dismissive labels in an attempt to discredit and silence each other. The core message of the game was that no matter what social values you have, attacking and ridiculing other people not only fails to achieve progress but has an additional effect of escalating the conflict while wearing you down in the process.

The videogame community is no stranger to depression. The back-and-forth online harassment and public shaming only exacerbate these problems, ruining lives and driving people away. While the game’s message resonated with some people and convinced them to change their behavior, I feel like it hasn’t done enough.

For that reason, all the money Nonadecimal Creative receives from Social Justice Warriors sales for the month of December will be donated to the American Foundation for Suicide Prevention[www.afsp.org] to help fund research into causes and treatments. The AFSP was chosen for their financial transparency and because they not only engage in advocacy and support measures that help people in the short-term but also fund research that could potentially alleviate these problems on a larger scale in the long-term.

You can purchase Social Justice Warriors for $3 (or more) on itch[nonadecimal.itch.io], Indie Game Stand[indiegamestand.com], or Humble.[www.nonadecimal.com] Or you can donate directly to the AFSP here.[afsp.donordrive.com]

In January, Nonadecimal will donate an amount equal to the funds due from itch.io, IndieGameStand, Desura, and Humble for sales of the Social Justice Warriors game from December 1st through December 31st.

UPDATE: Thanks to your generous purchases, Nonadecimal donated $200 to the American Foundation for Suicide Prevention. Read more here.[nonadecimal.com]

GET THE GAME ON STEAM

The warriors and their opponents fight and fall by the measure of their Sanity and Reputation meters. Trolls confound your sanity with logical fallacies and ad hominem attacks while actively working to destroy your reputation with wild accusations and photoshopped evidence of your misdeeds. How you choose to respond to these attacks is up to you. Relying solely on logical arguments to change minds doesn’t work very well online, but resorting to personal attacks and mudslinging will erode your moral high ground.

You can try it and form your own impressions by purchasing the game for $8 on Steam.

Sedge Nov 2, 2015 @ 11:00pm
I have so much buyer's remorse about this game. I could have spent $1 on it, but I ended up giving them $5, just because I thought it was about mocking social justice warriors-- you know, since SJW isn't exactly a positive label (and not really associated with actual social justice). But not only is the gameplay boring, bland, and repetitive, it seems like it's actually pro-SJWs, based on what the dev's said. Ffff.

plutes_boots Jul 10, 2015 @ 9:24pm
Okay so you donated money to the Suicide Prevention Hotline, but you only mentioned depressed people and you use a freaking Sanity meter. Hypocritical much or do you just not care about us "insane" mentally ill people ? Signed, someone who hallucinates and has delusions, thanks.

eifelkenny Feb 28, 2015 @ 4:21am
Why you declined my friends request? That's not a good service. Nevermind... When the keys for Indiegala Greenlight #4 will be added?

I'm Pam and I'm Here to Jam Feb 27, 2015 @ 5:51pm
hello ive read about this videogame and i am extermely angry - please read this long-winded post on why your videogaem makes me angry

Nonadecimal  [author] Feb 22, 2015 @ 9:27pm
Thanks fatbeer85! I fixed that bug earlier today in preparation for the Steam release on February 27th. I'll have an official announcement up as soon as I get this final build ready. I've temporarily disabled purchases on the other stores until I can upload the update with all these bug fixes.
*working hard*

fatbeer85 Feb 22, 2015 @ 8:12pm
So I bought the game from your website. I really like it so far, though i wish there was a bit more variety. I really liked how if your stats get high enough you can elevate the "trolls" out of the fight by maxing out their sanity or rep.
I did have an unusual bug (if it is a bug) where as the mage, after using the bottom option (writing a big blog or something, takes 2 turns) I can no longer select my attacks. everytime I push enter, it will select and carry out a command that i never got to chose. I died once because it kept spamming the first option. The other times, if I won it would go back to normal.
It has only happened a couple times and I still really dig the game!
< >

Social Justice Warriors has been Greenlit and is now listed in the Steam store. For the latest information, purchase options, and discussions for Social Justice Warriors, please see it on the Steam Store or in the Steam Community.
Visit Store Page
For more details Visit Community Hub
For latest discussions
If you really, really want to, you can continue to the Greenlight page. Information on this page may be out of date, since all the action has moved to the areas noted above.