Greenlight > Games > twotimingpete's Workshop
Greenlight is being retired. For more information on how to submit games to steam, refer to this blog post.
This item has been removed from the community because it violates Steam Community & Content Guidelines. It is only visible to you. If you believe your item has been removed by mistake, please contact Steam Support.
This item is incompatible with Greenlight. Please see the instructions page for reasons why this item might not work within Greenlight.
Current visibility: Hidden
This item will only be visible to you, admins, and anyone marked as a creator.
Current visibility: Friends-only
This item will only be visible in searches to you, your friends, and admins.
Ghost Song
Description Discussions12 Announcements6 Comments589 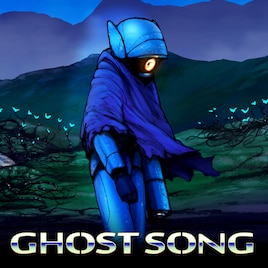 twotimingpete
Online
See all 76 collections (some may be hidden)
Kickstarter
Recent Announcements View All (6)
Beta Has Begun
November 10, 2014 - twotimingpete

The current beta build is up, and keys are being sent to backers. This build is only a portion of the game, and may contain bugs or other issues! It's an early look.

If you backed and haven't received your key yet, please email me at twotimingpete@gmail.com with your info and I'll get you one asap! please be sure to include "beta" in the subject.

If you want to back the game, then you can still do so here: http://www.ghostsonggame.com/gs/store/

As you can see, I've signed up my Steam infos, downloaded the SDK, read some of the relevant documentation, and the game is ready to be distributed via Steam keys! Simple and clean. I'm excited about this -- There's something really satisfying about seeing your own game on Steam!

The game will be available, for now, on Windows machines only and it's highly recommended you have an Xbox 360 or Xbox One gamepad. These are the gamepads the game is being developed on and for. Other controllers that emulate these may also work, and while it's technically possible to play on the keyboard, it's not optimal at all due to the number of buttons in use.

The build will be available to backers who have backed at the $50 level or higher. In retrospect I wish I had lowered this number, but I have to stick by what I established or else it'd be unfair to all of the backers who did back that much. If you are eager to check out the game as soon as possible, it's still possible to back the game by going to the website[www.ghostsonggame.com], and clicking the "back by paypal" option. If you don't want to do this or don't think it's worth it, that's completely cool too, and I hope you consider buying the final game for $15 when it comes out sometime next year!

Press
In addition to the "beta tier" backers, some testers and press will be invited to receive keys on an individual basis. If you have a youtube channel or a blog or otherwise work for a gaming related website and want to cover the game, email me at twotimingpete@gmail.com with your inquiry. You don't need to have a million views, I'm grateful people are out there covering games and doing videos and am taking a very liberal stance on this matter.

The Roundup
Here's a recap of some of the stuff I've been doing, as usual, in gif form! Please note that gifs run at lower framerates than the game itself -- The game runs at 60 fps on most decently modern desktops (no specific specs yet, don't have a broad enough sample pool).

Since this game is so frequently marketed via gifs, I present to you the world's first-ever (maybe) straight to gif trailer.

(Click the preview image for the full 30 second gif)


Thanks again guys for all your comments and support. If you have any questions I'd be happy to answer.

An Open World
Ghost Song is a 2D action platformer set in an open world. It takes inspiration from classics such as Super Metroid and modern classics like Dark Souls.

Explore a treacherous map, filled with wonders and dangers.. Piece together a deep story by finding clues and meeting npcs. Learn the secrets of the world and discover your own purpose.

Discoveries Await
Be rewarded for your exploration. Find new powers and abilities, many of which are not required to finish the game. Find strange creatures and stranger characters, each with a story of their own.

A Journey of Hope
Embark on an emotional quest to find closure for those you love and for yourself.

Thanks for checking out the game, let me know what you think in the comments. I'll be here to answer your questions if you have any. If you want to preorder the game, there's a Humble Bundle preorder widget on the home page: {LINK REMOVED}http://www.ghostsonggame.com

Raxendyl Mar 16, 2017 @ 12:14am
Just wanted to say I've been looking forward to this game for quite a while. The artwork + gameplay looks amazing. Can't wait to get to play it! Good luck :D

twotimingpete  [author] Jun 24, 2016 @ 3:22pm
I mean the game page here on steam. It's easier to keep things in order especially since I have a Q&A thread there already.

Wig Bang Jun 24, 2016 @ 2:51pm
That's annoying and inefficient. Many of us watch lots of games in development and Steam is a great standardized streamlined way of checking up.

Just update a few bits of data here and save people a lot of trouble.