Greenlight > Games > Vision Riders Entertainment's Workshop
Greenlight is being retired. For more information on how to submit games to steam, refer to this blog post.
This item has been removed from the community because it violates Steam Community & Content Guidelines. It is only visible to you. If you believe your item has been removed by mistake, please contact Steam Support.
This item is incompatible with Greenlight. Please see the instructions page for reasons why this item might not work within Greenlight.
Current visibility: Hidden
This item will only be visible to you, admins, and anyone marked as a creator.
Current visibility: Friends-only
This item will only be visible in searches to you, your friends, and admins.
Another Star
Description Discussions0 Announcements7 Comments131 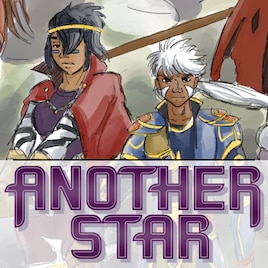 View Another Star in the store

It's Official! Another Star finally launches on Steam on July 28th! This release will be the new version 3, with updated enemy graphics and 32 achievements to seek out and earn.

Another Star will soon arrive on the Steam storefront, thanks to the time and effort of everyone who up-voted the game. It may seem like a small thing, but every single vote put the game that much closer to this moment. A huge "Thank You" to all of you!

And don't forget: if you've already bought the game through any other outlet, you will receive a Steam key once it becomes available.

Read More
Description
Release date: March 20, 2014
Another Star is a console-style RPG with a fast-paced battle system and a world that encourages players to explore and discover hidden areas as they lead their party on a journey across a fantasy world. While clearly influenced by the style and gameplay of the past, the game also implements innovations and ideas from the present. Random battles are less intrusive than classic console RPGs, alerting the player when enemies have been encountered, but giving them the choice to accept and fight, or ignore and continue exploring.

Inspired by the 26th Ludum Dare competition theme of Minimalism, Another Star uses a single 128 × 128 tile sheet to craft a vast and varied world for players to experience. While some retro games focus on parody and humor, Another Star lets its plot play out on its own weight to evoke the atmosphere of storytelling in an age when storage space was tight and every word had to count.

The game is presented using an optional CRT filter to emulate the look and feel of classic eight bit consoles. Additionally, the game's soundtrack is composed using samples from the Yamaha YM2413, a budget-priced FM that was built into or used as an add-on in several systems of the era.

Another Star is currently available for Windows and Linux, with planned support for Mac in the near future.

The game is currently available for sale through Desura[www.desura.com], IndieGameStand[indiegamestand.com], and via the Humble Widget on the game's website[visionriders.com].

Tachi is the inexperienced prince of Clan Minas, eager to prove himself as a warrior. Under his father's orders, Tachi is sent on a mission to retrieve a fallen star in the hopes that it will bring power and glory to his clan. But before long, Tachi's quest spirals out of control with clans betraying each other in the hope of getting the star's power for themselves. Thus begins a chain of events that will set Tachi on a journey across the entire planet, eventually learning the true nature of the fallen star he had once hoped to harness.

scifidude79 Feb 17, 2015 @ 12:09pm
@TheGrandHero: True, there is a lot of saturation in the RPG market right now from indie makers. But, I love you guys for it because RPG and FPS are my favorite genres. I can't stand the newer MMO garbage, so I really enjoy these indie projects that are not of that vein. Plus, I love the retro graphics and how you took it a step further by limiting yourself to 128 X 128 tiles. (what can I say, I was an '80s kid) The fact that it's not an RPG Maker game really cements it for me. Though, done correctly, I can live with RPG Maker games.

Well, if it's not Greenlit soon, I'm just going to buy it on Desura. I have an account there too. I ran the demo yesterday and it confirmed 2 things for me:

1. I WANT this!
2. It runs great on Kubuntu with the mono-complete package installed through the Ubuntu repositories. :)

Indie RPGs are a fairly crowded niche genre at the moment. It's hard to stand out, even with a non-RPG Maker game like this.

scifidude79 Feb 15, 2015 @ 11:47pm
How is this not Greenlit already? It looks awesome. I really enjoyed your video where you explained things.

wrathofsocrus Jan 23, 2015 @ 8:18pm
EPIC! I beat all 4 NES Dragon Warrior games on the original cartridges. This style with Linux support is fantastic!

Zeebrax the Astral Lifejacket Jan 13, 2015 @ 4:57pm
How is this doing in the voting? I bought this a long time ago and really want to playing this cool game on steam.

Another Star has been Greenlit and is now listed in the Steam store. For the latest information, purchase options, and discussions for Another Star, please see it on the Steam Store or in the Steam Community.
Visit Store Page
For more details Visit Community Hub
For latest discussions
If you really, really want to, you can continue to the Greenlight page. Information on this page may be out of date, since all the action has moved to the areas noted above.