Greenlight > Games > Tetragrammaton's Workshop
Greenlight is being retired. For more information on how to submit games to steam, refer to this blog post.
This item has been removed from the community because it violates Steam Community & Content Guidelines. It is only visible to you. If you believe your item has been removed by mistake, please contact Steam Support.
This item is incompatible with Greenlight. Please see the instructions page for reasons why this item might not work within Greenlight.
Current visibility: Hidden
This item will only be visible to you, admins, and anyone marked as a creator.
Current visibility: Friends-only
This item will only be visible in searches to you, your friends, and admins.
Darknet
Description Discussions2 Comments134 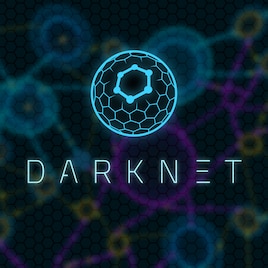 Tetragrammaton
Offline
See all 24 collections (some may be hidden)

View Darknet in the store

Store page
Description
Release date: Oculus Rift Launch
Darknet is a strategic hacking game set in a Virtual Reality cyberspace.
"The job is simple: break through the firewall and retrieve the data. But the net can be a dangerous place."

Inspired by classic cyberpunk fiction such as Ghost in the Shell, Johnny Mnemonic, and The Lawnmower Man, Darknet casts the player as an elite hacker in cyberspace. Zip between the nodes of a vibrant neon network, breaking ICE, slinging viruses, and tunneling through layer upon layer of cybersecurity on your way to the data.

Originally posted by Jason Johnson - Kill Screen:
"Darknet lets you pretty much live out Neuromancer, minus the neural damage."

The gameplay combines aspects of strategy, puzzle, action, and roguelike games. Each network contains dozens of interconnected servers, and each server contains a mind-bending, randomly-generated challenge. Scan the network, plan your attack, acquire software, and reach the data before time runs out!

To get a better sense of the gameplay, check out Cymatic Bruce's playthrough of the Darknet demo.

Darknet is the expanded version of Ciess, the winner of the 2013 Oculus VR Jam, and is designed from the ground up for the Oculus Rift.

Originally posted by Ben Kuchera - Polygon:
"Could be one of the Oculus Rift's best launch titles... One of the Rift's killer apps."

Raspek Da 'Blum Dec 28, 2014 @ 6:24pm
Reminds me of the in-the-computer scenes of movies like Hackers, Lawnmower Man, and Johnny Mnemonic.

Darknet has been Greenlit and is now listed in the Steam store. For the latest information, purchase options, and discussions for Darknet, please see it on the Steam Store or in the Steam Community.
Visit Store Page
For more details Visit Community Hub
For latest discussions
If you really, really want to, you can continue to the Greenlight page. Information on this page may be out of date, since all the action has moved to the areas noted above.