Greenlight > Games > Fancy Fish Games's Workshop
Greenlight is being retired. For more information on how to submit games to steam, refer to this blog post.
This item has been removed from the community because it violates Steam Community & Content Guidelines. It is only visible to you. If you believe your item has been removed by mistake, please contact Steam Support.
This item is incompatible with Greenlight. Please see the instructions page for reasons why this item might not work within Greenlight.
Current visibility: Hidden
This item will only be visible to you, admins, and anyone marked as a creator.
Current visibility: Friends-only
This item will only be visible in searches to you, your friends, and admins.
Deity Quest
Description Discussions3 Announcements3 Comments106 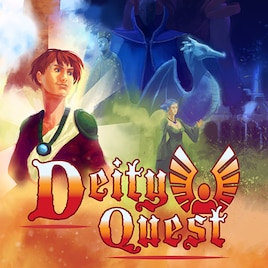 View Deity Quest in the store

After releasing Deity Quest and getting lots of feedback, one thing became blatantly clear - while the game was fun for a lot of people, a large number of people didn't understand the mechanics (and sometimes did very poorly and quit). Even those who eventually figured out the mechanics did so by trial and error, taking a long time before they could really get in to the game. From a very long list of feedback and requests, I have polished and tweaked Deity Quest to solve these problems, and finally released Deity Quest v1.1.5! 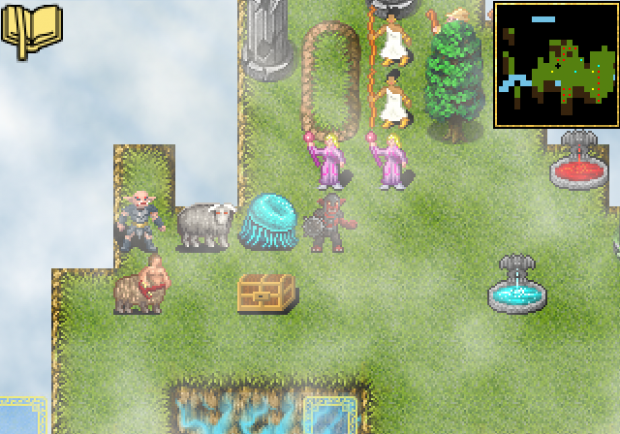 The main goal of this update was to add information where it was needed - things like the follower's current range (without having to look at skills and equipment), notifications explaining why a follower was not attacking, and a battle log that gives way more information than you probably need (but is still cool, and helpful if you are learning the game). 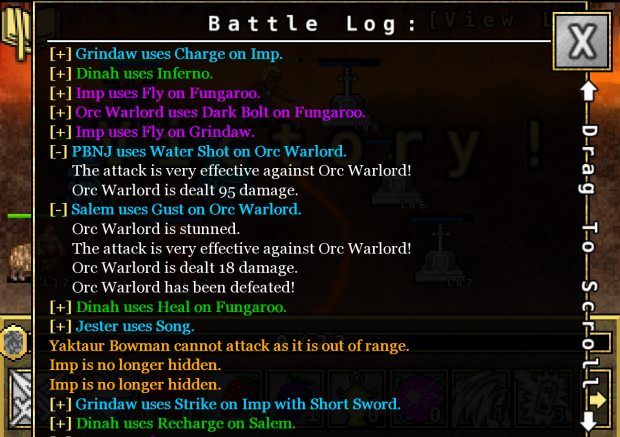 In addition to making the game clearer, I also added some new features that people had been asking for. There's now a mini-map so that you don't get lost (and can find that darn health fountain that you passed just a minute ago). I also added new items so that you don't have to go through 50 apples to heal your followers later in the game. There are now checkpoints that save your progress within a location, so if you lose the game or need to quit, you don't have to start the entire location over. There's also a second hotbar now so that so that you can quickly access more spells and items to support your followers during battle! 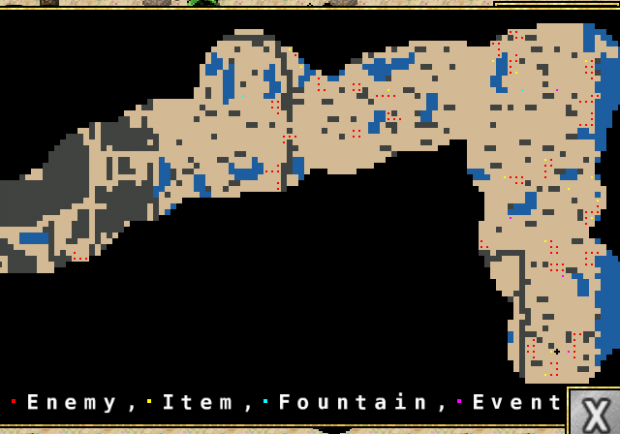 Whether you're a new player or not, this update greatly improves the game and answers a lot of questions that players have been having. If you already have the game, simply re-download it from the storefront you bought it from and make sure the game says v1.1.5 on the title page (if not, please send me a message). To transfer your save files over to the new version, simply copy the saves directory into the Deity Quest v1.1.5 folder (or use DQDB/Net to upload and download the saves). Note that areas you've already explored in the save will not change (no added checkpoints, etc). 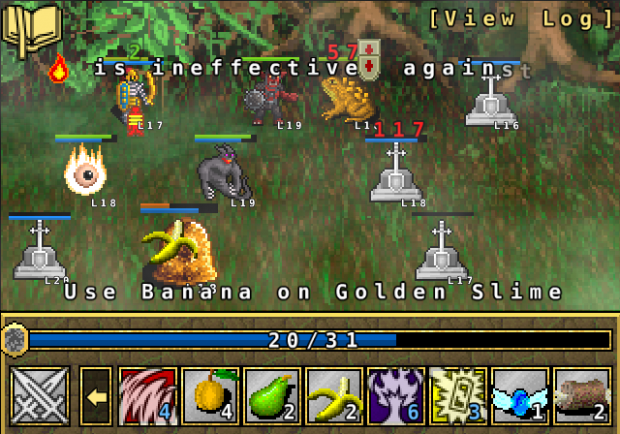 Finally, I'm afraid to say that my public server went down (and it is unclear when it will be back up). However, you can still host servers and play LAN games by following this tutorial: http://fancyfishgames.com/DeityQuest/server.html (and trading still works too). I also added a crash logger thanks to @larsiusprime's Crash Dumper[github.com]! If the game crashes, a logs folder will be created in the same directory where you extracted Deity Quest, and sending me those logs will make debugging much easier. 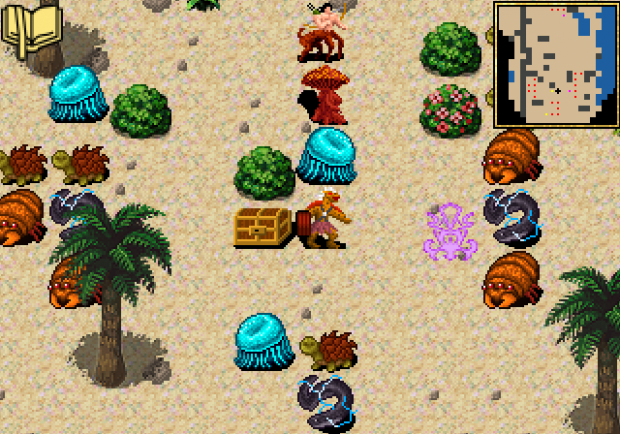 If you haven't picked up Deity Quest yet, you can get it in the Groupees Build a Greenlight Bundle[groupees.com]! Yes, Steam Keys will be given to everyone who buys the bundle should we get greenlit. The bundle only includes the basic edition, but if you want the extended edition, you can get it on our website[sites.fastspring.com] for $3 (usually $15) using the coupon code GROUPEES!

I hope you enjoy all the new features in this update, and please keep sending me feedback, as it really helps me improve the game!

So, Deity Quest has been out for almost a month, and we've been getting a lot of great feedback! Using many player suggestions, we have developed Deity Quest v1.1.4 - the first major update since launch! One of the biggest problems players had was figuring out what was going on during battles - with many followers attacking at the same time, the battlefield becomes chaotic. Additionally, type modifiers end up being forgotten, as it's just too hard to see which type is strong against which other types with everything going on at once.

The main improvement to Deity Quest v1.1.4 was to reduce the chaos of battles by displaying no more than one attack at a time. If two attacks happen simultaneously, it will show one attack after the other, allowing you to see exactly who used what skill on who. This mode can be enabled/disabled in the options menu (it is called "Show Every Attack"), and is enabled by default. While this does slow down battles, the battle speed can be adjusted in the options menu, so you can balance between sequential attacks happening quickly, or simultaneous attacks happening slowly, to get a mode that is perfect for you! You can view a video showing two battles, the first with Show Every Attack enabled, and the second with it disabled here: Show Every Attack Mode on IndieDB

Unfortunately, because of the way multiplayer battles work, this mode will not be available during multiplayer battles. Speaking of multiplayer battles, I have finally set up a public server! There are two - one called "David's Sever v1.1.3" and "David's Server v1.1.4". The servers will only accept clients of the same version, as there have been some balancing changes. However, the v1.1.3 server will remain up indefinitely in case people are still using an old version. Anyone with the extended edition, feel free to log in to the server and fight friends without having to set up your own server or LAN party. I've also put some of my mid-level followers up for trade, including one unique follower (the Demon Princess)! You can view trades by clicking on DQDB/Net in the extended edition and then clicking "View Open Trades." 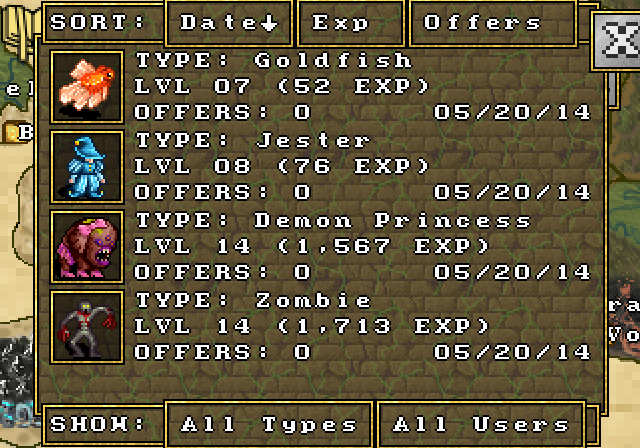 Why doesn't anyone want my Demon Princess? Isn't she cute?

As for showing type modifiers, when "Show Every Attack" is enabled, a message is displayed whenever an attack is effective or ineffective! Only one of these messages will show at a time, so if your follower uses an area of effect attack or the attack is effective against BOTH enemy types (for 4x damage), it will only show one of the messages. However, this really helps players figure out what is strong against what, and if you notice the enemy getting a lot of "effective" hits, you may want to rearrange your followers!

There have also been some smaller tweaks, improvements and balancing. For example, the Vagrant Shroom and Angel now start with non-mana consuming attacks. While they still get awesome mana-using attacks when they level up, this ensures that your starter follower will always be able to attack even if you run out of mana (which happens quite frequently when you use Divine followers). Additionally, some people were having trouble with the decimal points, so I multiplied all of the stats (except mana) by 10. And lets face it, dealing 25 damage sounds a lot cooler than dealing 2.5 damage anyways! 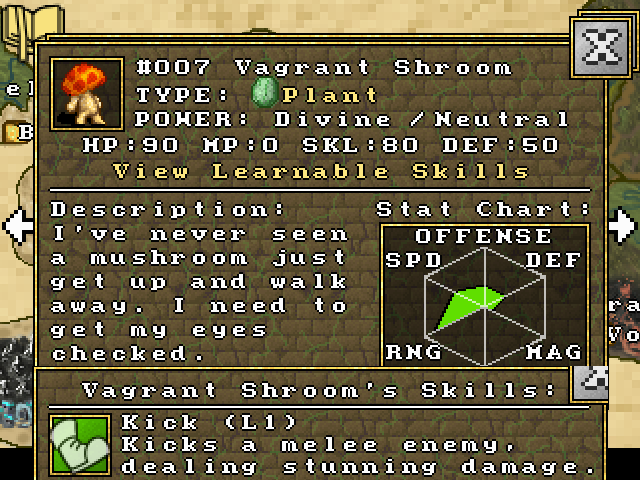 If you already bought Deity Quest, I strongly recommend you update to v1.1.4 - don't worry, your save files will still work (just make sure you copy over your saves directory or use the DQDB save upload). To update, simply re-download the game from the site where you purchased it.

If you haven't picked up Deity Quest yet, I strongly recommend you do so now :P! I've just put the game on sale for 50% off for Desura's Cheap End event, which is the best deal yet (with the previous sale being only 20% off). You can buy the game from out Desura page[www.desura.com]!

I hope you enjoy the update! And if you're not quite ready to buy yet, you can download the Deity Quest v1.1.4 demo on our IndieDB Downloads page!

Read More
Description
Release date: May, 2014
Deity Quest is a light-hearted, pokemon-inspired RPG where you play as an ambitious young god, recently assigned to a world - Aberos - to convert followers and gain power. Your goal is to become the Overgod, the highest position among the many gods of Aberos. Develop your divine magic, support your followers in fast-paced 6 vs. 6 battles, adventure through locations, and compete with other deities in your quest to reach the top!

BluRobotHero May 16, 2014 @ 9:12am
Be greenlit! No, wait, hoston trontrixonum bara bomrox! Darn! I thought a random magical spell would help!

Marsh Apr 17, 2014 @ 7:45am
Looks fun. Very old school. I don't know why everyone's freaking out about pokemon. I can see the inspiration, but it's not really anything close to a Pokemon game.

You have my vote.

punch lunch Apr 15, 2014 @ 7:39am
I like that you can convert a jellyfish to your religion. However, it looks like a fairly generic Pokemon-esque RPG.
< >

Deity Quest has been Greenlit and is now listed in the Steam store. For the latest information, purchase options, and discussions for Deity Quest, please see it on the Steam Store or in the Steam Community.
Visit Store Page
For more details Visit Community Hub
For latest discussions
If you really, really want to, you can continue to the Greenlight page. Information on this page may be out of date, since all the action has moved to the areas noted above.