Greenlight > Games > encomplotgames's Workshop
Greenlight is being retired. For more information on how to submit games to steam, refer to this blog post.
This item has been removed from the community because it violates Steam Community & Content Guidelines. It is only visible to you. If you believe your item has been removed by mistake, please contact Steam Support.
This item is incompatible with Greenlight. Please see the instructions page for reasons why this item might not work within Greenlight.
Current visibility: Hidden
This item will only be visible to you, admins, and anyone marked as a creator.
Current visibility: Friends-only
This item will only be visible in searches to you, your friends, and admins.
The Season of the Warlock
Description Discussions2 Comments210 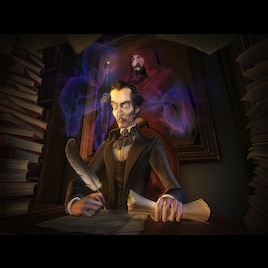 encomplotgames
Offline
See all 29 collections (some may be hidden)

View The Season of the Warlock in the store

Store page
Description
Release date: Q4 2015
The Season of the Warlock, previously known as The Weird Story of Waldemar The Warlock, is a classic point and click adventure game which combines vintage horror with dark humour. Mostly 2D, with very detailed and artistically painted backgrounds. It is our contribution to a genre that we believe in and enjoy.

The (Weird) Story in a nutshell
Our adventure is set in the fictitious realm of Groldavia. Once upon a time ruled by a fiendish feudal lord (Starosta) called Waldemar Gorobec, this is a country steeped in legends.

One of the myths surrounding Waldemar is that he was a warlock of unimaginable power and cruelty, until finally he was betrayed by his closest apprentices and burned at the pyre by a frenzied populace…

Centuries later, his life and work form the subject of devoted study for Alistair Ainsworth, an english lord obsessed with the occult. He is so immersed in his research that he has set up his living quarters at the old castle that used to belong to the fabled necromancer, with the sole company of Nigel, his loyal, if somewhat rascally, butler.

Both of them will soon be up to their noses in the mysteries hidden within the ancient walls of the castle which seem to emanate from the imposing and compelling portrait of the warlock himself. This painting appears to be the depositary of Waldemar´s errant soul, a soul that is still yearning to carry out its grisly vengeance and that will present Lord Alistair with an offer he will not be able to resist.. or will he?
Popular Discussions View All (2)

Will you support Linux (SteamOS)?
LinuxGamesTV

Xphero Oct 18, 2015 @ 12:47pm
I have to agree with Nozomi, the previous title had a ring to it and said a little bit about the game. "The season of the Warlock" sounds so generic. Nontheless I'm still looking forward to this game and I hope the developers will do a great job :) It looks amazing :D

Nozomi Oct 13, 2015 @ 9:38pm
I have to confess that the title "The Weird Story of Waldemar, the Warlock" was the thing that caught my attention and made me follow this game. I will miss that title

Anyway, nice job are you doing there with the art.

Just wanted to let you know that we posted a new update at Kickstarter: https://www.kickstarter.com/projects/encomplot/the-weird-story-of-waldemar-the-warlock/posts/1215123

Everything is explained right there, but as a summary: we changed the name of the game and we updated the art!

Thank you for your support. As soon as we have important information we will be posting a notice.

encomplotgames  [author] May 7, 2015 @ 9:00am
We are pretty confident that there will be a Linux version. There is no confirmation yet, we have to thoroughly test builds to get sure it works smoothly, but it is looking good so far.

The Season of the Warlock has been Greenlit and is now listed in the Steam store. For the latest information, purchase options, and discussions for The Season of the Warlock, please see it on the Steam Store or in the Steam Community.
Visit Store Page
For more details Visit Community Hub
For latest discussions
If you really, really want to, you can continue to the Greenlight page. Information on this page may be out of date, since all the action has moved to the areas noted above.