Greenlight > Games > kriswd40's Workshop
Greenlight is being retired. For more information on how to submit games to steam, refer to this blog post.
This item has been removed from the community because it violates Steam Community & Content Guidelines. It is only visible to you. If you believe your item has been removed by mistake, please contact Steam Support.
This item is incompatible with Greenlight. Please see the instructions page for reasons why this item might not work within Greenlight.
Current visibility: Hidden
This item will only be visible to you, admins, and anyone marked as a creator.
Current visibility: Friends-only
This item will only be visible in searches to you, your friends, and admins.
Hypership Out of Control 2
Description Discussions0 Comments68 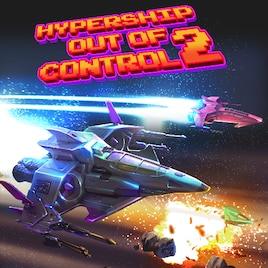 kriswd40
Online
See all 3 collections (some may be hidden)

View Hypership Out of Control 2 in the store

Store page
Description
Hypership Out of Control is a work in progress. It is planned for release on PC, Ouya, iOS, and Android. Potentially we will release it on next generation consoles like XBox One, PS4, and WiiU as well. As this game is in development, expect the look to change as things progress. Feel free to leave comments about what you think of the game and we will work to address any criticisms that we can. And before someone tells me the sound effects suck, please note that all current sound effects are ALL placeholders.

Hypership Out of Control 2 places you in an ship with no brakes, rocketing through space with wreck-less abandon. The longer you survive, the faster you will go. The game features several game modes and global high scores so you can compete with friends, family, and strangers to see who is the best Hypership pilot out there. Hypership 2 is non-stop action that will test all your reflexes and keep your heart racing.

The original Hypership Out of Control was released on XBox Live Indie Games (XBLIG), Windows Phone 7 (WP7), and iOS. It is rated 4.5 stars on the AppStore, was nominated by PocketGamer.UK for Best Arcade Game of the Year, and Complex.com ranked Hypership Out of Control as the best game on XBLIG. There was also a semi-sequel Hypership Still Out of Control released for iOS and XBLIG that adds new levels and updated graphics. Free demos are available for XBLIG and WP7 and a free Lite version is available on the AppStore. If you're on the fence about voting up the sequel, I encourage you to try the original game yourself.

Hypership 2 will build on what made the original great. Better graphics and music are just the tip of the iceberg. New items, branching levels, uniquely themed levels, and several new mechanics will make Hypership 2 everything and more that the original was.
< >
68 Comments

don_nasri_karam Aug 19, 2014 @ 1:10pm
The title screen looks like one of the most awesome pictures ever (I want a poster of it) but the game looks the complete opposite.

Hypership Out of Control 2 has been Greenlit and is now listed in the Steam store. For the latest information, purchase options, and discussions for Hypership Out of Control 2, please see it on the Steam Store or in the Steam Community.
Visit Store Page
For more details Visit Community Hub
For latest discussions
If you really, really want to, you can continue to the Greenlight page. Information on this page may be out of date, since all the action has moved to the areas noted above.