Greenlight > Games > Fictiorama Studios's Workshop
Greenlight is being retired. For more information on how to submit games to steam, refer to this blog post.
This item has been removed from the community because it violates Steam Community & Content Guidelines. It is only visible to you. If you believe your item has been removed by mistake, please contact Steam Support.
This item is incompatible with Greenlight. Please see the instructions page for reasons why this item might not work within Greenlight.
Current visibility: Hidden
This item will only be visible to you, admins, and anyone marked as a creator.
Current visibility: Friends-only
This item will only be visible in searches to you, your friends, and admins.
Dead Synchronicity: Tomorrow comes Today
Description Discussions9 Announcements6 Comments399 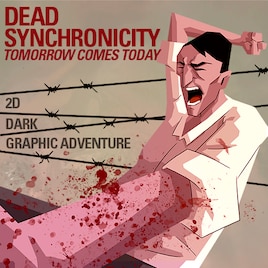 We are trying to merge this Greenlight page with the Store page. Meanwhile, you can access the game through this link:


Thanks SO MUCH to everyone who upvoted the game on Steam Greenlight! Your support is awesome!

It means the game will feature full English and German professional voice over, and texts in Spanish, English, German, French, Italian and Russian! Isn’t it GREAT???

In case you have some doubts about what this means for the game and regarding the Kickstarter campaign we run a few months ago, we have just posted an update with some FAQ. Feel free to ask!

And, of course, do not worry: the game will be on Steam, though published by Daedalic. Thanks SO MUCH to everyone who upvoted the game on Steam Greenlight!

Thanks SO MUCH for your support!

Some of the core game features:

A terrible pandemic is turning all of humanity into the Dissolved – the sick whose deliria provide them with supernatural cognitive powers... but also steer them towards a gruesome death.

The root of this illness seems to be the Great Wave, an inexplicable chain of natural disasters that destroyed all energy sources and communications and plunged the world into a chaos ruthlessly controlled by both the authorities and the army alike.

So the player will have to help Michael, a man with no past, recover his identity and decode the events that brought the world to the edge of collapse. Because, if Michael doesn’t hurry, he won’t be able to avoid the impending moment of dead synchronicity... when Time itself dissolves.

Could you then describe Dead Synchronicity: Tomorrow comes Today as "Guybrush meets Mad Max meets 12 Monkeys" ? Well, we guess you could…

Dead Synchronicity will be released! Do you want Android or Wii U support? Look inside!
Damballa
< >
399 Comments

Fictiorama Studios  [author] Apr 13, 2015 @ 4:43am
Hi @dustler88. Thanks! In fact we are trying to do it, since they seem to be different threads. Meanwhile, we will add an announcement.

doozza Apr 11, 2015 @ 2:47am
The game is already on the main page =) Why don't you tag it 'Released', so the guys who supported this Greenlight would get notified?
Thanks!

Fictiorama Studios  [author] Jan 28, 2015 @ 9:56am
We are closing our Paypal site this Friday, so if you want to get one of our exclusive Kickstarter rewards... hurry up! Paypal [www.deadsynchronicity.com]

Dead Synchronicity: Tomorrow comes Today has been Greenlit and is now listed in the Steam store. For the latest information, purchase options, and discussions for Dead Synchronicity: Tomorrow comes Today, please see it on the Steam Store or in the Steam Community.
Visit Store Page
For more details Visit Community Hub
For latest discussions
If you really, really want to, you can continue to the Greenlight page. Information on this page may be out of date, since all the action has moved to the areas noted above.