Store Page
Tower Unite > Guides > CarbonCopyCat's Guides
This item has been removed from the community because it violates Steam Community & Content Guidelines. It is only visible to you. If you believe your item has been removed by mistake, please contact Steam Support.
This item is incompatible with Tower Unite. Please see the instructions page for reasons why this item might not work within Tower Unite.
Current visibility: Hidden
This item will only be visible to you, admins, and anyone marked as a creator.
Current visibility: Friends-only
This item will only be visible in searches to you, your friends, and admins.

Specular? Metallic? Roughness? What's that??? - A Workshop Guide
By CarbonCopyCat
A basic guide to Tower Unite's newly-added Specular/Metallic/Roughness features in workshop uploads. Disclaimer: I'm in no means an expert in PBR, so topics in this guide are not guaranteed to be accurate.

Comments
Preface (Disclaimer and References)
I am in no way an expert on this topic, and the information in this guide is just the result of a couple of hours of Google-based research, so this information may have inaccuracies. For further research on this topic, I have included the resources I've referenced to compile this guide.

Also, you may find that you personally get better results by messing with sliders and not obeying the information in this guide, and you're free to do that if you wish. You may also not have good results for certain materials, such as cloth. There are a lot of features still missing from Tower for a proper PBR workflow, and standard BDSF materials may not provide good results for certain materials. This is an explanation of how PBR materials are meant to be used for physically accurate results, not a strict guide on how to use materials.

Metallic vs. Specular
Slightly In-depth explanation
Both metallic and specular are methods to determine the reflectivity of a given surface in the BDSF material model. However, both methods differ in how light is reflected off the surface. When a metallic (conductive) object is illuminated by rays of light, those light rays bounce directly off of the surface, forming a specular reflection (indicated in blue). However, when a non-metallic (dielectric) object is illuminated by light rays, some of those light rays will not bounce directly off the surface, but will penetrate into the object, scatter, and exit the object, forming a diffuse reflection (indicated in green). 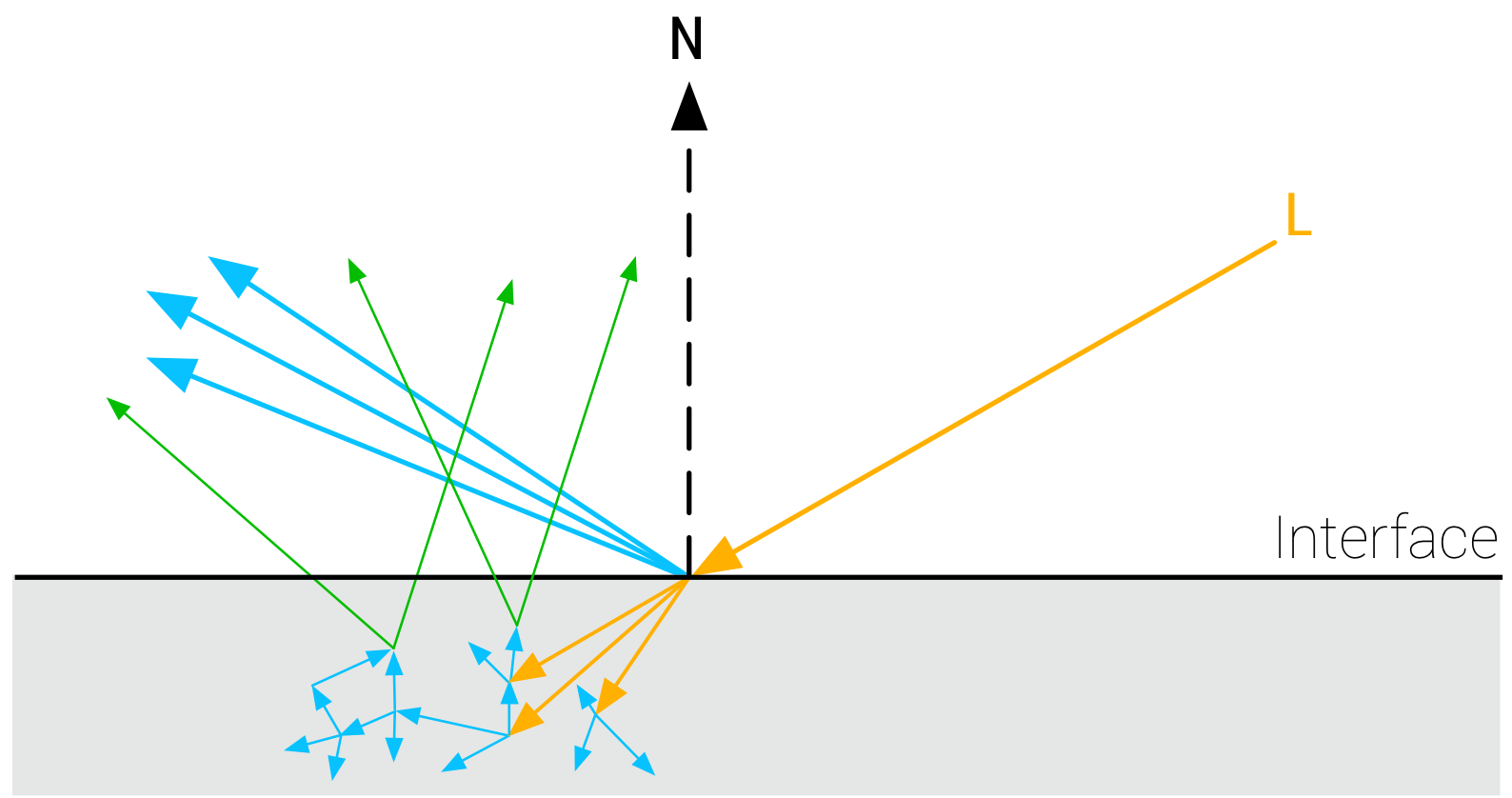 (Diagrams taken from Google's "Physically Based Rendering in Filament")

Due to these differences, the models of metallic and nonmetallic used in PBR differ, and should be taken into account during material creation. However, roughness also plays a key role as well. 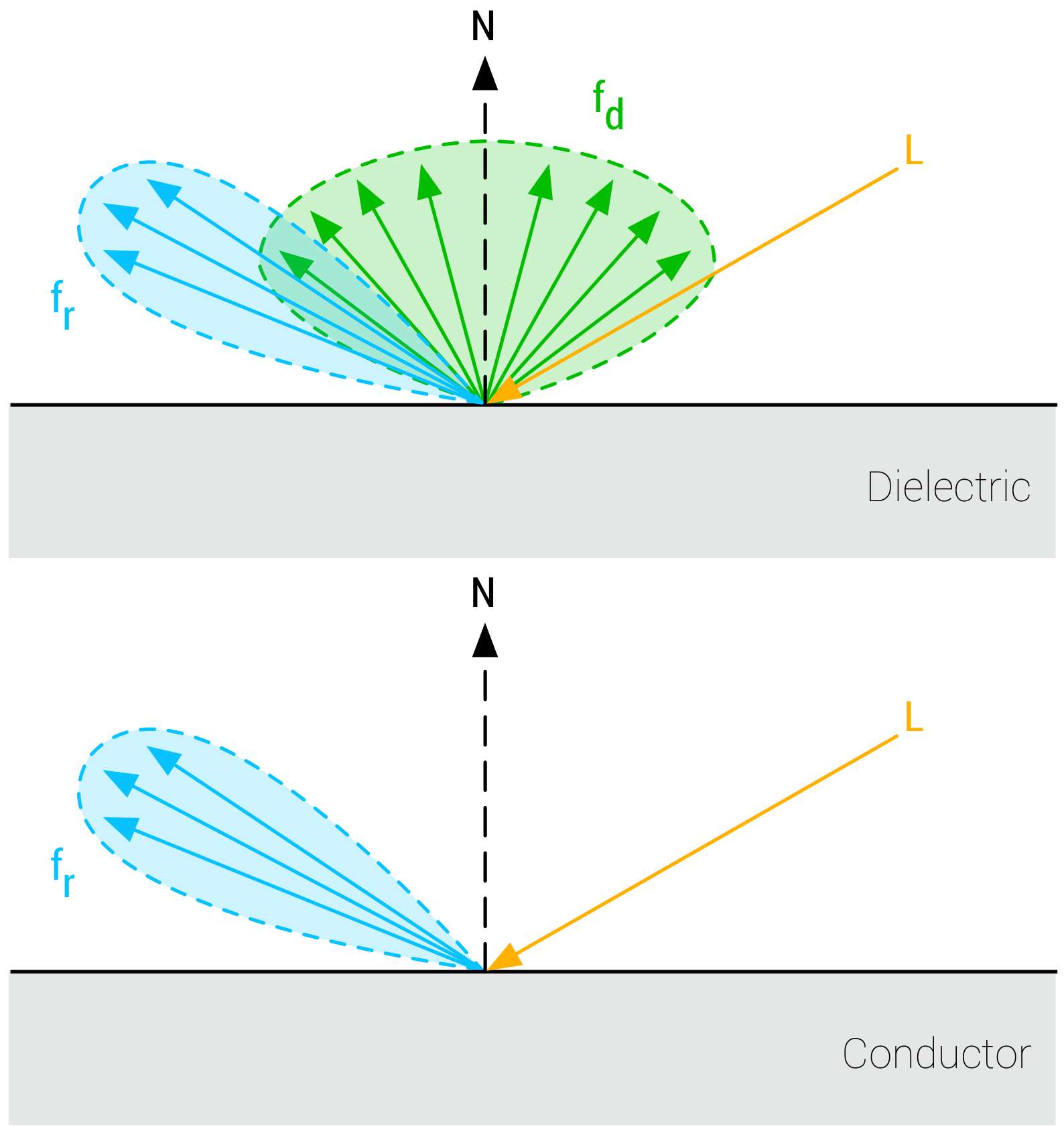 When creating a material, you may find that, during your initial setting of metallic/specular settings in an "accurate" manner, your workshop item has become too reflective. Although this may be surprising at first, persist, as the roughness slider also plays a key role in material appearance.
What is Roughness?
Nerd Explanation
When light rays bounce off of an object, they bounce off relative to the Angle of Incidence, or the angle between the light source and the object's surface. Given a stationary light source and object, it should seem that all light rays should bounce in the same direction, but in reality, this is not true. Most surfaces are not completely flat, and have bumps in the surface that change the angle of incidence, thereby changing the angle light rays are reflected.

(Diagrams taken from Google's "Physically Based Rendering in Filament")

In practice, that means reflected light should be modeled more as a cone, rather than a straight line, with the angle varying with the roughness of the material.

Practical application
Most surfaces, both in reality and in the virtual world, are not perfect mirrors. Therefore, good usage of the roughness value is important to get good-looking materials when using Specular/Metallic options.
Using the Metallic Slider
The metallic slider determines the "metalness" of an object. For pure metals, the metallic slider should be set to 1, while for non-metals, the metallic slider should be set to 0. For hybrid materials, such as tarnished metal, a value between 0-1 can be used. Please note that, again, rust is not conductive, and should use a metallic value of 0.

Although pure, non-weathered metals are not very prevalent in reality, the land of video games is not reality. If your model isn't specifically tarnished/corroded, do not be afraid to set your metallic value to a value of 1.

When you set your metallic value to 1, you may find that your material becomes unexpectedly dark. This is normal, and is generally alleviated by adding some roughness to your material. Most objects are not perfect mirrors, even if they are very shiny. Additionally, the actual "colors" (albedo) of pure metals are actually surprisingly light as well. If you are creating your own materials for your object, this may be something to consider. 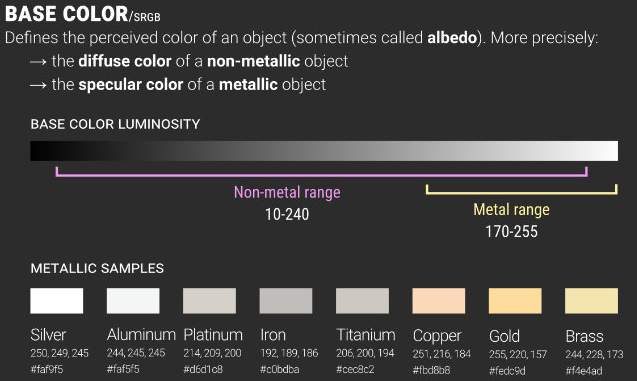 (Taken from Google's "Physically Based Rendering in Filament")
Using the Specular Slider
The specular slider determines the reflectivity of non-metals. For metals, this should be set to 0, while for non-metals, values can range drastically.

All objects, even if they're very diffuse and aren't actually very reflective, do have specular. Instead, for those types of materials, you want to apply a proper specular value, and then make it very rough.

However, not applying specular is still an option, and may be desired in some cases. For example, if you wish to keep the look of a model ported from a game using an older rendering engine, having no specular will likely provide better results. Additionally, certain materials, such as cloth, may not have good results due to their complexity, and may end up looking like plastic. Until further features are added to the workshop, not including specular may be the best option.

Here are some sample specular values of real-world materials, to serve as reference.
Material
Specular
Glass
0.5
Plastic
0.5
Quartz
0.570
Ice
0.224
Water
0.255
Milk
0.277
Skin
0.35
Gemstones
0.625 - 1.0
(Values taken from UE4's "Physically Based Materials" documentation and Google's "Physically Based Rendering in Filament")
Although you may be tempted to give shiny materials a very high Specular value, remember that the Roughness value also plays a key role in the appearance of the material as well. Proper usage of specular and roughness values can play a key difference in having materials be read properly; that is, having glass be read as glass, not as plastic or gems.
Using the Roughness Slider
While Specular and Metallic help to determine what material an object's surface acts like, Roughness helps to determine the actual look of the material.

As most objects are not perfect mirrors, roughness values of 0 should be avoided. Otherwise, usage of the Roughness value falls mostly under artistic control.

Here are some sample roughness values for given materials:
Material
Roughness
Plaster
0.86
Wood
0.68
Plastic (Glossy)
0.54
Steel
0.25
Mirror
1.0
(Values taken from Marmoset's "Physically-Based Rendering, And You Can Too!")
Wrap-up, and Afterword
Specular, Metallic, and Roughness can be a bit daunting to deal with, but proper usage on the right materials can lead to good-looking results. However, although this is a guide to get "physically correct" materials, artistic interpretation does play a large role as well; even if something is physically inaccurate, if you think it looks good, your choice may be the "correct" one. Do consider though, that learning to properly use PBR materials can also provide benefits outside of Tower Unite's workshop as well.

Again, feel free to visit the linked resources for further information on this topic. This is only a brief overview, and more information may result in better-looking results.
< >
1 Comments