Greenlight > Games > Junkfish's Workshop
Greenlight is being retired. For more information on how to submit games to steam, refer to this blog post.
This item has been removed from the community because it violates Steam Community & Content Guidelines. It is only visible to you. If you believe your item has been removed by mistake, please contact Steam Support.
This item is incompatible with Greenlight. Please see the instructions page for reasons why this item might not work within Greenlight.
Current visibility: Hidden
This item will only be visible to you, admins, and anyone marked as a creator.
Current visibility: Friends-only
This item will only be visible in searches to you, your friends, and admins.
Monstrum
Description Discussions19 Announcements12 Comments697 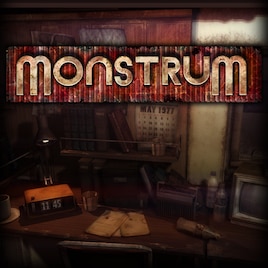 Team Junkfish
Offline
See all 244 collections (some may be hidden)

View Monstrum in the store

The day has finally come, Monstrum has launched on Early Access!

You can buy the game on Steam here: http://store.steampowered.com/app/296710/

We've got a gameplay trailer for Monstrum ahead of the Early Access release on the 29th. Give it a watch!

Read More
Description
Release date: January 2015
The Survival Horror Labyrinth
Monstrum is a first person survival horror game which finds players stranded aboard a vast, derelict ship filled with traps, environmental hazards, and another passenger in the shape of a terrifying and deadly beast.

With no means to take their pursuer down the player must search the ship to discover a possible means of escape, using their wits and guile to evade the monster hunting them, running, hiding and luring it away with distractions to avoid getting killed.

Combining permadeath, a variety of different hunters and a procedurally generated ship that changes its layout every time, Monstrum is a challenging and punishing game that aims to be a truly replayable horror experience.

Monstrum will be available for release on Windows, with Mac, Linux and Oculus Rift support coming later.

Mr. Winter King Jan 26, 2015 @ 9:09am
anybody else think that this game could have some awesome multiplayer settings?

Monstrum has been Greenlit and is now listed in the Steam store. For the latest information, purchase options, and discussions for Monstrum, please see it on the Steam Store or in the Steam Community.
Visit Store Page
For more details Visit Community Hub
For latest discussions
If you really, really want to, you can continue to the Greenlight page. Information on this page may be out of date, since all the action has moved to the areas noted above.