Greenlight > Games > IMGN_PRO's Workshop
Greenlight is being retired. For more information on how to submit games to steam, refer to this blog post.
This item has been removed from the community because it violates Steam Community & Content Guidelines. It is only visible to you. If you believe your item has been removed by mistake, please contact Steam Support.
This item is incompatible with Greenlight. Please see the instructions page for reasons why this item might not work within Greenlight.
Current visibility: Hidden
This item will only be visible to you, admins, and anyone marked as a creator.
Current visibility: Friends-only
This item will only be visible in searches to you, your friends, and admins.
Kholat
Description Discussions9 Announcements18 Comments784 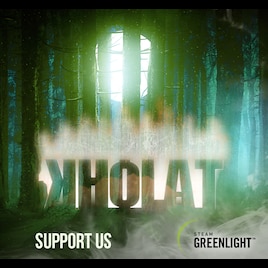 IMGN_PRO
Offline
See all 143 collections (some may be hidden)

View Kholat in the store

Check out our new trailer:
https://www.youtube.com/watch?v=uM0tk9Qsw54

Here's is the most important link of all links - link to our store page:
http://store.steampowered.com/app/343710/

Please visit it, join the community, share it with your friends. We are counting days to release date!

Read More
Description
Release date: 2014
Kholat is an adventure-horror game inspired by true event known as Dyatlov Pass incident – mysterious death of nine Russian hikers, that led to countless, unconfirmed hypotheses. Player will dive directly into boundless scenery of inhospitable Ural Mountains, with task to find out what really happened. In the course of events you may approach even more question marks.

Will you find the answer?
Will you get any closer to the truth?
Will you survive?

Dyatlov Pass incident was a real story that happened in winter of 1959. Nine skilled alpinists went for a trip to the northern part of Ural Mountains, which ended fatally. Bodies of expedition's crew were found scattered on slope of Kholat Syakhl.

Russian investigators closed the case stating that "a compelling unknown force" had caused the deaths.

More information about Dyatlov Pass Incident can be found at:
http://en.wikipedia.org/wiki/Dyatlov_Pass_incident

Features:
- fear manager; tool responsible for tension in the game
- self made story inspired by true events
- main storyline and a lot of background plot to be discovered by players
- in-game navigation by map and compass

What do you happened in the Diatlov Pass Accident? What's your theory?
Sadistic_Dentist

[KE] Grand Master Frodo Jun 16, 2015 @ 11:16am
If you were inspired by this story to create a game, may I suggest another? The Lake Bodom murders in the 1960's. A group of teens in Finland went camping near Lake Bodom. Over the course of the night, the teens would disappear, only one survived. There was no sign of a struggle and there was no evidence of a struggle. And there was no evidence stating that this said individual was the muderer. But due to this cold case in Finland, it has also been an inspiration for one metal band, Children of Bodom. I would highly recommend making a game out of the Lake Bodom Murders, using the Grim Reaper as the culprit.

wkduffy Apr 28, 2015 @ 5:45pm
Extremely interested and have been keeping an eye on it for half a year, but not sure about an $18 pre-order. Going to have to let other early-adopters take the lead on this, and I'll wait for reviews.

Kholat has been Greenlit and is now listed in the Steam store. For the latest information, purchase options, and discussions for Kholat, please see it on the Steam Store or in the Steam Community.
Visit Store Page
For more details Visit Community Hub
For latest discussions
If you really, really want to, you can continue to the Greenlight page. Information on this page may be out of date, since all the action has moved to the areas noted above.