Greenlight > Games > Boomstick_King's Workshop
Greenlight is being retired. For more information on how to submit games to steam, refer to this blog post.
This item has been removed from the community because it violates Steam Community & Content Guidelines. It is only visible to you. If you believe your item has been removed by mistake, please contact Steam Support.
This item is incompatible with Greenlight. Please see the instructions page for reasons why this item might not work within Greenlight.
Current visibility: Hidden
This item will only be visible to you, admins, and anyone marked as a creator.
Current visibility: Friends-only
This item will only be visible in searches to you, your friends, and admins.
Dark Deception
Description Discussions2 Announcements17 Comments1044 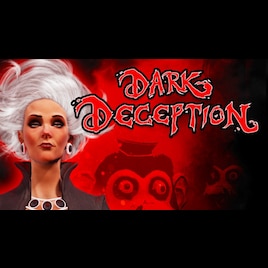 Servebot
Offline
See all 54 collections (some may be hidden)

View Dark Deception in the store

Dark Deception is about to launch and the coming soon page is up here:

Click the link and wishlist to help us reach more people and be the first to install the game once it goes live tomorrow. As mentioned, it is FREE. Play through the entire first chapter at no cost :)!

Hey everyone! Want to take a moment to apologize for the lengthy delay in updates :/! I know it sucks when developers go silent. It's been crazy busy for us the past few months. We've basically been running around to game shows overseas (like the Taipei Game Show), bombing horribly on Kickstarter (twice! Wahoo), and working on the game non-stop. Happy to say that it's all been worthwhile though, because we've secured a partner and I think they are a good fit for Dark Deception and will allow us to add some really cool things! We can't announce who the partner is yet, but I'm sure that will come out before E3. We will be showing a new build of the game at E3. I'm dying to share some images and new levels with you all, but that will come soon enough! Jake Kaufman has been a machine on music and I'm now convinced that we might have wound up with what could be his most unique soundtrack to date :D. Either way, thanks to everyone who has been following us and showing their support so far! Much more to come post-E3.

Read More
Description
Release date: TBA
We love horror games and we love Pac Man! So we decided that we'd like to see a horror version of Pac Man - for Oculus Rift! The only difference being that it has an actual story arc and world to explore. This is how the game works - there is a hub world that the player starts in. They can access portals that take them to mazes where they need to collect soul shard and a puzzle piece. Soul shards are the currency of the game and unlock new abilities and future levels. The puzzle pieces are story items and the player needs to collect the piece from each level to create the Heaven's Riddle (puzzle ring) that will allow him to escape the hell he is trapped in. The player got there in the first place by making deal with a demon named Helen Bierce.

This is an arcade game, so the pace is fast and intense. It is not a slow tension build horror game like Slender Man. The style is more Haunting Ground/Castlevania/CarnEvil than anything else.

Carolyn Seymour (Myrrah from Gears of War and Dr. Chakwas from Mass Effect) lends her awesome voice to the game. The story is written by Mike Lee, the writer for Ghost Recon, HAWX, End War Online, Warhammer's Malus Darkblade Chronicles, and Hunter: Avengers.

You play as a cop on the run, fleeing from deeds you thought long buried. In desperation, you turn to the urban legend of Helen Bierce, a famous actress who vanished in 1930. Dark and disturbing rumors surrounded her disappearance at the time. Out of options and backed into a corner, your only chance is to dive headfirst into evil and hope to survive.

The gameplay for Dark Deception is pretty simple: collect all the soul shards (the purple triangles) before the monsters kill you. Collecting all the shards will reveal a puzzle piece, and grabbing that will complete the level.


Here's what you can expect from Dark Deception:

Also possible (depending on Kickstarter campaign):

- procedural levels
- localization (Spanish, German, French, Italian, Japanese, Chinese, Korean).
- Multiplayer Mode - compete for shards with other players in an arena filled with monsters. Collect powers to become monsters and kill off other players. Player with the most shards wins!

Try out the demo for the 1st level of Dark Deception on Newgrounds or Kongregate! Here are the links:

Smul May 12, 2018 @ 8:33am
@Boomstick_King you have been developing this game for over 4 years now, surely you must have something to show for it

Boomstick_King  [author] Jun 9, 2017 @ 9:16pm
Remember that Fez and Stardew Valley both took 5 years to develop. We've spent about 2 years on DD, so we are not that slow considering the small size of our team :P. We are also finishing up a multiplayer game called Dead Acres at the same time.

Boomstick_King  [author] Jun 9, 2017 @ 9:12pm
Been awhile since I checked this page. Dark Deception is not canceled. Actually it has been picked up by a AAA publisher. We are not allowed to announce anything about the game yet, but it will be releasing in the near future.

JackKnife282 Jun 9, 2017 @ 5:24pm
When I watched the game the last time on YouTube, I had the desire to try it out. Unfortunately there is not very much going on and maybe the game is dead. Not good...

Dark Deception has been Greenlit and is now listed in the Steam store. For the latest information, purchase options, and discussions for Dark Deception, please see it on the Steam Store or in the Steam Community.
Visit Store Page
For more details Visit Community Hub
For latest discussions
If you really, really want to, you can continue to the Greenlight page. Information on this page may be out of date, since all the action has moved to the areas noted above.