Greenlight > Games > Kaldorei's Workshop
Greenlight is being retired. For more information on how to submit games to steam, refer to this blog post.
This item has been removed from the community because it violates Steam Community & Content Guidelines. It is only visible to you. If you believe your item has been removed by mistake, please contact Steam Support.
This item is incompatible with Greenlight. Please see the instructions page for reasons why this item might not work within Greenlight.
Current visibility: Hidden
This item will only be visible to you, admins, and anyone marked as a creator.
Current visibility: Friends-only
This item will only be visible in searches to you, your friends, and admins.
Hover : Revolt of Gamers
Description Discussions39 Announcements8 Comments841 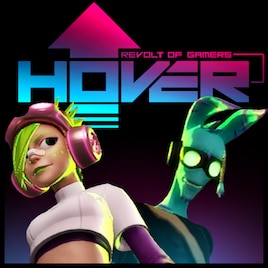 View Hover : Revolt of Gamers in the store

Yet we can announce it! The public Alpha will come on Steam Early Access on April the 6th :)

We are still very busy with the refining of the game, to make it as cleaner as possible for the public alpha realease.

No promises for the date then (because we'd really hate to break them), but be sure we too really can't wait to play with all of you!

If you want some infos about the development, here is a new making of Hover video :
https://www.youtube.com/watch?v=lN1vm8akOY4

Created and developed by 3 young independant developers, "Hover : Revolt of Gamers" is a free runner in a futuristic 3D open world.

Between the crazy Jet Set Radio, the interactivity of Mirror's Edge and inspired by films like "The Fifth Element" or "Star Wars", Hover let you play as a Gamer Team from another world, appalled at the dictatorship in their city.

Totally free in a large futuristic open world city and wearing a special high-tech suit offering you the ability to move around unlike anyone, you will have to impress all the Gamers of the City doing crazy Triks and "Parkours" in order to recruit an impressive team and enrole in more serious missions to overthrow the tyranny.

You will have to locate and infiltrate in the control centers of the anti-video games propaganda, free the citizens confined by the authorities, get back the consoles confiscated from the population, andfinally dethrone the new Mayor at the origin of this whole mess. Many security drones are patrolling city so be alert to the risk of being chased, and be prepared to shake off them.

Each Gamer you recruit in your team is playable and the experience gained can be used to upgrade their stats.

You will be able to switch into the multipayer mode just by connecting to a server :
cooperate with other players in missions or challenge them in fully configurable events (for exemple you can create race tracks in real time).

Particulary suitable for the Oculus Rift the game offers an outstanding immersion and completely new dizziness.

Whatever your favorite controllers (keyboard / mouse or joystick) the game is designed for a quick start with a minimum of buttons.
Popular Discussions View All (39)

Lhun Apr 6, 2015 @ 11:13am
Quick question, do you guys have a comfort mode option, and how are you dealing with SimSickness?

Hover : Revolt of Gamers has been Greenlit and is now listed in the Steam store. For the latest information, purchase options, and discussions for Hover : Revolt of Gamers, please see it on the Steam Store or in the Steam Community.
Visit Store Page
For more details Visit Community Hub
For latest discussions
If you really, really want to, you can continue to the Greenlight page. Information on this page may be out of date, since all the action has moved to the areas noted above.