Greenlight > Games > Dophlin's Workshop
Greenlight is being retired. For more information on how to submit games to steam, refer to this blog post.
This item has been removed from the community because it violates Steam Community & Content Guidelines. It is only visible to you. If you believe your item has been removed by mistake, please contact Steam Support.
This item is incompatible with Greenlight. Please see the instructions page for reasons why this item might not work within Greenlight.
Current visibility: Hidden
This item will only be visible to you, admins, and anyone marked as a creator.
Current visibility: Friends-only
This item will only be visible in searches to you, your friends, and admins.
Soulbound
Description Discussions6 Announcements5 Comments81 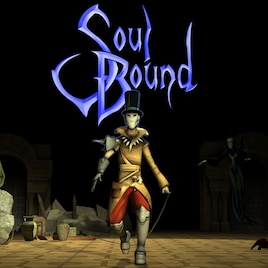 Peter_TMD
Offline
See all 13 collections (some may be hidden)
Recent Announcements View All (5)
Indiegames.com wrote a nice article about Soulbound
February 8, 2014 - Exodus

Check it out here:

Thanks again for the great let's play video. Don't be afraid that the game will be too easy in the future! We had to lower the difficulty because we had to present the game to a group of casuals, who couldn't even get past the tutorial. But we'll definitely ramp up the difficulty in the next alpha build. :)

Get the current build at indiedb.com!

Read More
Description
Description of Soulbound
Soulbound is an action-adventure game in which you play as the Beastmaster, an intrepid explorer who dares to venture where others do not. While you have seen much of the world, you are not the greatest of warriors. By taming monsters you encounter on your travels, you can use their power and skills against their former allies.
The game takes place in the abandoned city of Caladan, the greatest of ancient states. What was once a city filled with light has now turned into a dark abyss. Tread carefully, for your next step could be your last!

Key Features
Put a team of the right monsters around you to survive
There are different kinds of crawling through the dark corridors of Caladan. Each kind has its own strengths and weaknesses. You have to choose your team carefully if you want to survive.

Use the skills of your monsters to hide your own weakness
In comparison to your enemies you are very weak. Everything depends on how you control your monster and how you use their personal qualities in thrilling fight scenes. Each kind of monster has its own special attack which you can use in times of need to prevent the enemies from taking your life.
Popular Discussions View All (6)

Hey, I'm Ralph and I'm the lead designer. If you have any questions, feel free to ask them...
Exodus

Hi! my name is Gilles and I am the art director of Soulbound, ask me anything!
Dyrnwyn
< >
81 Comments

Nexus Trimean Mar 30, 2014 @ 7:25pm
The Greenlight page needs better videos. You sound like you have a solid concept, but we need more in game footage, less teaser and more sellable gameplay.

Sneep Snorp Mar 29, 2014 @ 6:22pm
Personally, I don't believe I will buy the game. However, it is rather unique and I do believe that there is a market for this kind of game and some people will probably buy it.