Greenlight > Games > InnoMen Team's Workshop
Greenlight is being retired. For more information on how to submit games to steam, refer to this blog post.
This item has been removed from the community because it violates Steam Community & Content Guidelines. It is only visible to you. If you believe your item has been removed by mistake, please contact Steam Support.
This item is incompatible with Greenlight. Please see the instructions page for reasons why this item might not work within Greenlight.
Current visibility: Hidden
This item will only be visible to you, admins, and anyone marked as a creator.
Current visibility: Friends-only
This item will only be visible in searches to you, your friends, and admins.
Sierra Ops
Description Discussions2 Announcements9 Comments204 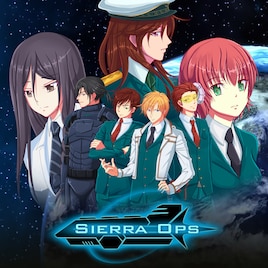 Kemeo
Offline
See all 69 collections (some may be hidden)
Indiegogo

View Sierra Ops in the store

Sierra Ops episode 1 will be released on January 15!
Episode one will be free, and we hope everyone will like it!
https://store.steampowered.com/app/364210/Sierra_Ops/

We made a summary of the development on our website, for anyone who is curious:
http://innomenpro.com/

To get more updates, we're most active on Twitter: https://twitter.com/sierralunabot
We also have a Facebook page here: https://www.facebook.com/sierra.ops/

Since the team's quite busy either hammering bugs, maintaining the triforce balance, and selling goatskins to raise further development funds, it's hard to keep every channel informed of what's going on with the development. We aren't slacking around, we're releasing a god damn triple Ayyy Visual Novel!

Now seriously though, we've upped the production values a couple of times, and we've transitioned to Live2D 2.1, and got 2 badass artists aboard, namely Tooaya for character artworks and Ungdi-sea for concepts and background illustrations. Our publisher, Sekai Project helped us gather all the pitchforks and utilities we need to deliver the game that will change people's lives.

Anyway, you can find the latest updates on our IndieGogo updates page, and demos on our official website[innomenpro.com] or the link on the store page

If you have any questions, feel free to send us a message here[innomenpro.com] or check our FAQ.

After nearly decimating all of mankind over three centuries ago, humanity looked to the stars to rebuild their past glory. With the invention of terraforming technology, self-sustaining, man-made ecosystems and reliable space travel, large off-planet colonies and mining posts were soon established to feed the ever-growing human population. The power of the human race grew. However, with power comes corruption. With corruption comes imbalance. With imbalance comes unrest. With unrest comes war.

Play as Captain Junius Fahrenheit, a soldier of the United Terran Vanguard onboard the state-of-the-art ship, the Sierra, as him and his crew are thrown into humanity’s first interplanetary war. Tasked to protect Earth and free its colonies from under the Ares Confederacy of Mars’ grasp, there’s no question that he must fight to protect everything he stands for…

But what exactly is it he stands for? Who is right? Who is wrong? Does it even matter?

Perhaps there’s more to this than meets the eye.

Sierra Ops has been Greenlit and is now listed in the Steam store. For the latest information, purchase options, and discussions for Sierra Ops, please see it on the Steam Store or in the Steam Community.
Visit Store Page
For more details Visit Community Hub
For latest discussions
If you really, really want to, you can continue to the Greenlight page. Information on this page may be out of date, since all the action has moved to the areas noted above.